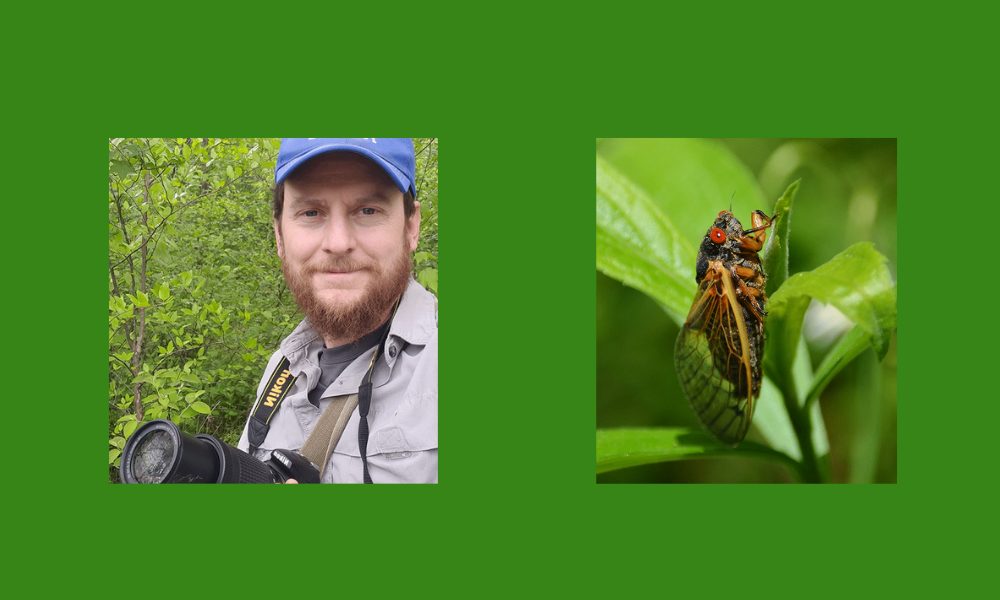 Christopher Brown remembers where he was when the parents of the 2021 “Brood X” cicadas emerged. He was a graduate student working on his dissertation in Nashville, Tennessee. Now, 17 years later, he’s an associate professor of biology at Georgia Gwinnett College, which didn’t exist the last time the inch-long insects made an appearance above ground.

A lot can change in 17 years. The last time Brood X emerged, George W. Bush was in the last year of his first term, Mark Zuckerberg invented Facebook, and Apple was three years away from releasing the first iPhone.

Brown remembers walking the streets of Nashville in 2004 and seeing the sidewalks and trees littered with the insects and their shed skins. The cicadas look a bit intimidating, with black bodies, orange wings and bright red eyes, and at an inch long, they’re large for an insect, but Brown says there’s nothing to fear from them.

“They might look scary, but they can’t hurt anyone. You could grab one and hold it and it can’t do anything to you,” he said.

Brood X is one of the biggest of the 15 known periodical cicada broods, which will translate into billions of the bugs coming up out of the ground — once the soil reaches 64 degrees — and making a break for the safety of the treetops in large areas of 15 states, from Georgia to New York, west to the Mississippi River, Ohio, Indiana and Illinois.

Witnessing such a huge arrival of insects is rare, so scientists like Brown are buzzing with excitement over Brood X’s arrival. The genus of the 13- and 17-year cicadas is called Magicicada because they seem to appear magically, said Brown, but the truth is they’ve been alive under our feet the whole time.

“The term ‘hatching’ is not quite accurate,” he said. “They hatched from eggs 17 years ago. The females inject their eggs into plants with a swordlike ovipositor, and when they hatch, the nymphs drop to the earth and dig themselves into the ground. They’ve been there, digging around and drinking the fluid from plant roots ever since.”

So, the “emergence” every 17 years represents the end of the cicadas’ lives, not the beginning, noted Brown.

“My bias is to focus on the nymph cycle,” he said. “The idea that a fly or a mayfly lives for a day is a myth and misleading. The adults don’t live long, but the babies do. People get the idea that cicadas are the same way – they come out and live for a few days and die, but that’s just looking at the adult phase. The nymphs have been alive and active for 17 years!”

Many people also confuse cicadas with locusts, said Brown, but even though they look similar, they are quite different.

“They are in different orders,” Brown explained. “Grasshoppers and locusts have biting mandibles, while cicadas have piercing-sucking mouthparts – a long needle like thing they inject and suck the juices out of plants.”

Cicadas are loud, defenseless and big – the perfect prey in the wild. They burst out of the ground all at once to overwhelm their predators. The strategy is a safety in numbers game.There will be enough of them to satiate every appetite with enough left over to mate and carry on the line. Despite the prospect of Magicicadas popping out of the ground in the millions, Brown doesn’t think it’s likely that Brood X’s arrival will have a huge effect on the ecosystems around Gwinnett County this time.

“It might affect the food chain a little, but not like it used to,” he said. “Gwinnett County has grown so much. Where they were buried 17 years ago might now be a parking lot, and we’ve also gotten rid of a huge number of trees. We might not see as many cicadas for those reasons, but they will still be pretty noticeable. I’m curious to see what happens here in the southern limit of their range.”

Brown said most people will hear the cicadas before they see them. Males make a high-pitched trill that sounds like constant, loud television static and can get up to 100 decibels, as loud as a lawnmower. It can be distracting, but there’s nothing hostile about it. It’s a cry for attention, to attract the females and make babies, so the next generation of “magic cicadas” can create their own buzz another 17 years from now.