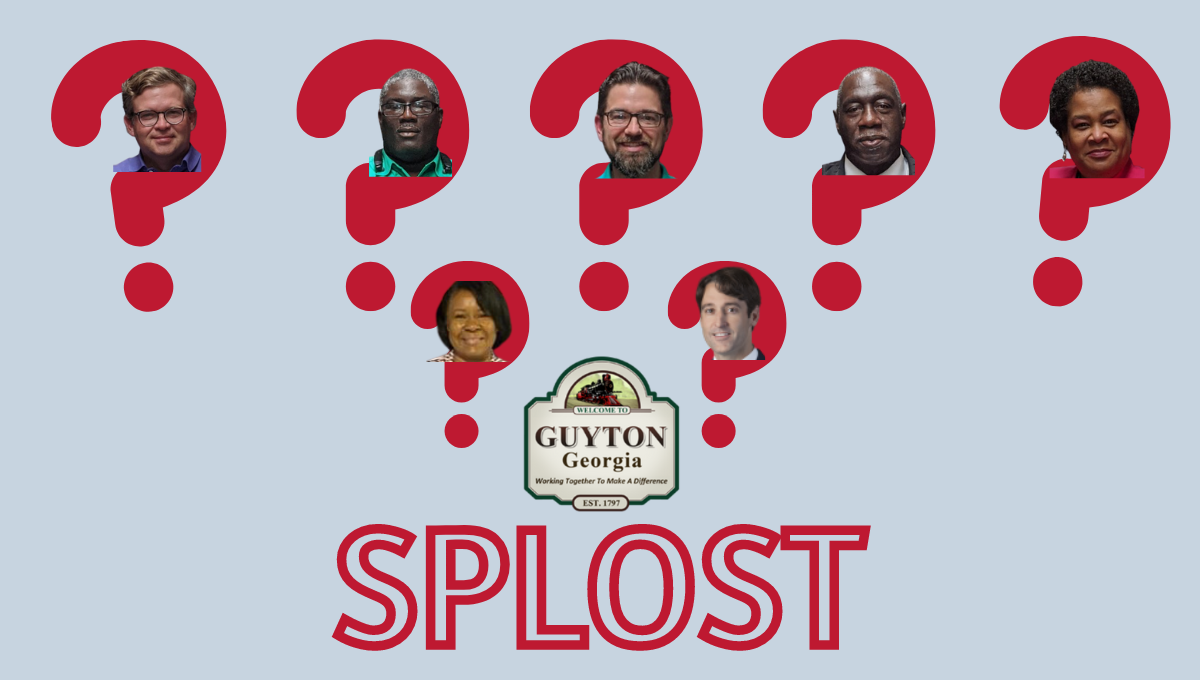 Though the current administration in the City of Guyton has been at the helm for almost three years, it still can’t seem to make sense of Georgia’s SPLOST law.

During the September 2022 city council meeting, citizen Jeremiah Chancey called city council members and Mayor Russ Deen onto the carpet for their approval of a SPLOST equipment list which was voted on during the summer.

Chancey first blasted elected officials for approving the list in violation of the law because SPLOST dollars are not permitted for maintenance. Citing the Georgia code, case law from the courts, and a number of advocacy organizations which operate to assist local governments, Chancey outlined all of the ways city officials should have been aware of what is and is not allowed.

Chancey also eviscerated city officials for approving a list of specific equipment such as blowers, mowers, and the like, each with a maximum price cap, because the contracted company, EOM, which manages public works projects, sought new equipment to use. He said the items actually purchased exceeded the budgeted amount and varied in type and brand from what was on the list council approved.

Mayor Russ Deen told Chancey in the open meeting that the City Manager, Maketa Brown, was authorized to make the purchases up to $130,000. But Chancey, equipped with the city’s own purchasing policy, disemboweled Deen, who was seemingly unaware that the city manager only utilizes discretion over the General Fund, not the SPLOST account. Chancey lamented that only the council could make changes to the list as it was approved. Deen merely replied, “We can look into this and get back to you.”

Chancey then went on to belabor the city’s continued indifference to the law.

“This council is going to have to hold the city employees responsible and they’re going to have to be held responsible for their actions. You purchased items using SPLOST funds that are specifically prohibited by law. Rules and regulations exist for a reason. Whether you like them or not, you have to follow them. This is yet another example of this council voting to pay for something without doing their due diligence. This has become common practice, every meeting you vote on something – you just vote on it and don’t take five minutes to look into it and research it…Do better.”

City Attorney Ben Perkins merely sat with his head in his hand during Chancey’s entire presentation.

Per page 15 of the SPLOST manual on state law from ACCG:

SPLOST proceeds can only be used to fund capital outlay projects. With some exceptions, SPLOST proceeds may not be used for maintenance and operation costs related to the proposed SPLOST projects or any previously approved projects. The primary intent behind SPLOST is to pay for specifically enumerated projects, not to balance the government’s books or to pay for other governmental expenses.

Capital outlay projects are defined by law as major projects which are of a permanent, long-lived nature, such as land and structures. They are expenditures that would be properly chargeable to a capital asset account as distinguished from current expenditures and ordinary maintenance expenses. The term expressly includes without limitation roads, streets, bridges, police cars, fire trucks, ambulances, garbage trucks, and other major equipment.

The Georgia Virtue filed an Open Records Request with the City of Guyton last week, seeking all the necessary documentation which would show:

The only document the City of Guyton possesses is the Intergovernmental Agreement between the city and the county, and that is likely due to the county drafting the document.

The city has failed to meet any of the reporting requirements that are to be published in the local newspaper as well as what is required to be posted on the city website. In fact, after three years, the city’s ‘finance’ portion of the city website is still completely blank.

Thanks to an Open Records Request filed by citizen Andy Harville, checks written out of the SPLOST account show that the city paid a private citizen for damage done to their property during a SPLOST project.

Not Their First Rodeo

In November 2020, Mayor Russ Deen suggested using SPLOST dollars to pay for the salary of an Effingham County Prison supervisor so that inmate labor could be used to maintain city roads and ditches. When the issue was challenged in a TGV article, City Attorney Ben Perkins made a presentation during the November city council meeting in which he belabored that he had ‘read the statute backwards and forwards’ and made calls to the Georgia Municipal Association. He contended that everyone ‘seemed to agree’ with his conclusion that the practice was permitted. His research was an incredible feat given the fact that the article was published less than one hour before the close of the business day on the day of the council meeting.

When questions were asked during the discussion that evening which were not favorable to the city’s actions, Deen gaveled out one individual while Perkins snubbed a question by citizen Andy Harville.

Perkins’ ultimate conclusion was that if the use of SPLOST dollars on salaries turned out to be illegal, the city could just pay back the money and he didn’t think ‘that was the worst consequence.’

The city council voted to use SPLOST dollars to pay for the salary anyway, but never actually made good on that vote. They instead utilized General Fund dollars, as evidenced in the budgets posted online.

In the weeks that followed, open records requests were filed with the City of Springfield, where Perkins is also the city attorney, about how they pay for prison labor. Records revealed that the city pays the salary of the supervisor for the prison inmates through the General Fund, not the SPLOST account.

Subsequent budgets for the City of Guyton further revealed that despite Perkins’ lamentations in an open meeting about his correctness, city expenditures for prison salaries have never been paid for out of the SPLOST account. City officials, however, have never voted to this effect, nor did they vote to amend the origination of the funds in 2020.

No Claims of Ignorance

Guyton officials, elected and appointed, cannot claim that they simply didn’t know better. As stated by the city attorney, they were briefed on the law after reading the code sections ‘backwards and forwards.’ Additionally, in the previous debates on the use of SPLOST dollars, Perkins repeatedly stated ‘as long as you account for this appropriately’ and ‘as long as we track it, I don’t see a problem with it.’

But the city still has no approved SPLOST project list, it does not meet the annual reporting requirements as mandated by law, and it is not following its own internal policies on SPLOST spending.