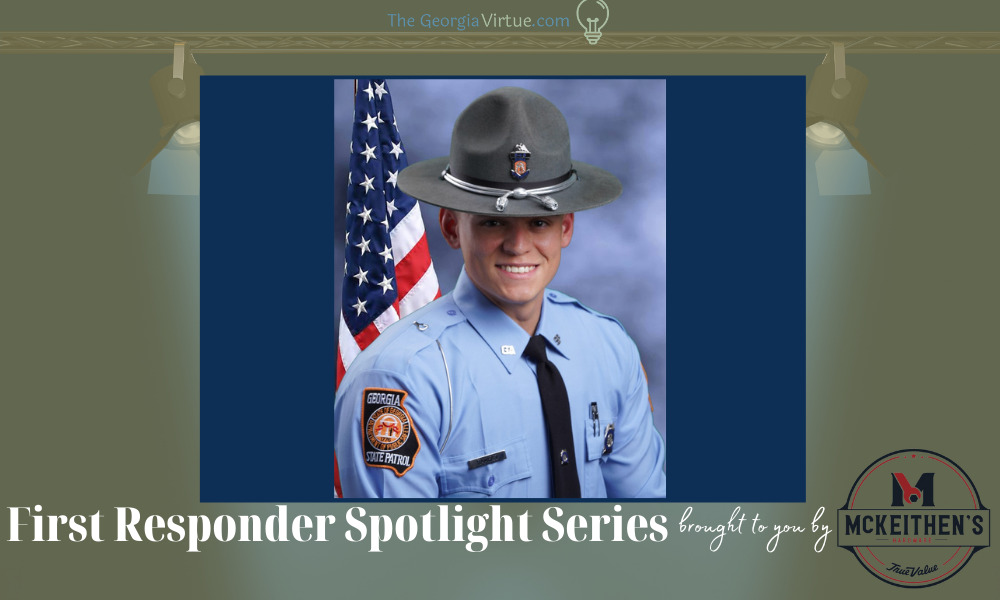 The First Responder Spotlight Series features law enforcement, firefighters, EMS, and other emergency personnel who have made a career out of serving our communities – often in ways we never see – each and every day. The series is sponsored by McKeithen’s True Value in Statesboro.

The saying goes that ‘seniority doesn’t matter, it’s productivity that people measure’ and for Trooper Aaron Ramirez of the Georgia State Patrol, that couldn’t be more true.

He’s been on the job for a little more than a year and a half and already has a great deal to show for it.

The Metter native is the first in his family to go into law enforcement. Ramirez knew from a young age that he was interested in the profession. Like many, he was drawn to the idea of being a police officer, but that later evolved into a desire to go the route of a state agency, like the Georgia Bureau of Investigation.

While attending school at Georgia Southern University, Ramirez began an internship with the Georgia Department of Public Safety. Essentially, he worked in the radio room learning about dispatch and communications, as secretary at the front desk learning administrative duties, and went on a number of ride alongs where he saw first hand what Troopers encounter on the job. Ramirez said it not only helped him get his foot in the door with the agency, but also gave him a wide view of everything the department does.

“I realized, ‘Hey, this is pretty cool’ and I was able to see both sides of how it all works. I realized I wanted to be the person that’s actually out, actively trying to help people, stop people, doing necessary public safety things instead of showing up after and investigating what already occurred. That’s an important job as well, but being on the front line, that’s for me,” Ramirez said.

Upon completion of the internship, Ramirez continued his work with DPS as an official employee. He worked as a Field Cadet, which is still a non-POST-certified position, but it offers slightly more access and experience than an intern.

When he graduated from GSU with a degree in Criminal Justice in 2019, Ramirez wasted no time applying for the 108th Trooper School.

In the 8 months, he completed basic mandate training, and covered a plethora of other subject matter, including advanced driving courses, advanced firearms training, and additional tactical training, as well as DUI enforcement, traffic case law, and crash investigations.

During the height of the pandemic, Ramirez graduated from Trooper school and garnered the Driving Proficiency Award for his Trooper class. He was then assigned to Post 45 in Statesboro – the same place he completed his internship and worked as a Field Cadet. As a familiar face among familiar faces, Ramirez said a number of individuals at the Post have mentored him since 2018. He spoke particularly highly of his Field Training Officer, a now-retired Trooper, who Ramirez said influenced him in a way that will have long lasting impacts.

“He just always did everything the right way and with compassion and I still take everything he told me and taught me in consideration for how I do my job today.”

As we’ve seen around the nation in the last few years, the perception of law enforcement has changed considerably. That only made the job more enticing for Ramirez. “I wanted the opportunity to be a factor in changing the perception some people have.”

When asked how you accomplish such a feat, Ramirez said, “Kindness. Show them kindness and compassion. You know our core values are Trust, Fortitude, Compassion, and Professionalism and I feel like if you can show those core values while you’re on the job doing the job, you can slowly change people and change their perception as well.”

“We come into contact with people who don’t like law enforcement and I try to speak with them, just ask them about their life and try to find a way to get on their level to show them that we’re just people, the same as them, we’re just in uniform.”

That prompted the question of whether or not he’s seen that come to fruition. Ramirez shared about an experience involving an arrest for driving under the influence. Understandably, the person was very upset at the time, with both Ramirez and the circumstance, but a year or so after the fact, the driver contacted Ramirez. The person wanted to share the impact Ramirez had on their life, the impact of the arrest, and to share that they were now doing well and on the right track. ‘That felt so good to be able to see that and see that what I’m doing is working sometimes.’

But the job, in addition to the inherent dangers, comes with stressors, too. The most difficult part of his job, Ramirez said, is motor vehicle crashes. “Sometimes you go on scene and it’s just chaos. There’s stuff all over the road, people screaming, ambulances are on scene, there’s a whole bunch of stuff going on. Sometimes it’s just hard to find out what happened.”

Nevertheless, working with the public and the ever-changing pace keeps Ramirez loving his profession. Being passionate about what you do, Ramirez said, makes it easier to do the job.

Ramirez was also nominated by Tattnall County Sheriff Kyle Sapp for the Valor Award from the Peace Officer Association of Georgia stemming from a multi-county chase involving a man who kidnapped an adult woman in Tattnall County. The organization presented that award to him in 2021.

But while he loves his job, Ramirez says he prioritizes the importance of balance. Having a close knit family in the area doesn’t hurt either and provides ample opportunity to decompress from the job, too. On top of that, his family is growing as well. Ramirez and his wife are expecting a baby boy in August.