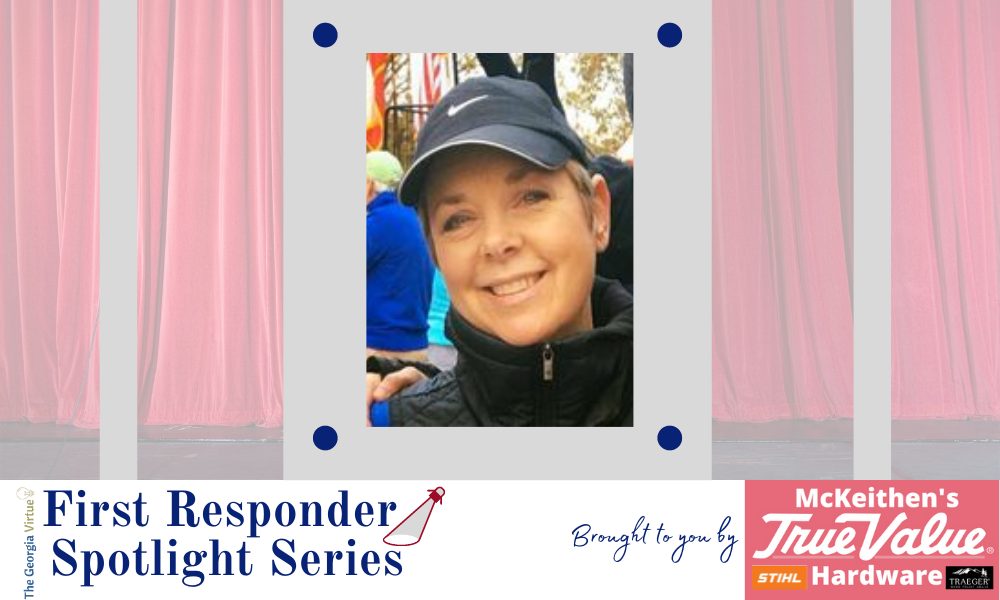 Kelly Barnard has been in public service her entire life.

As the Director of Bulloch County’s E-911 services, she is the go-to guru for all things first responder services. The 911 Center dispatches for 11 area police departments, 4 fire and rescue units, and three ambulance services from the management center on Highway 301 in Statesboro.

Barnard’s love of serving her community, however, comes as no surprise since so many of those around her have also served their communities. Kelly’s dad was a GBI agent as well as an arson investigator for the state and her husband, Barry, works in law enforcement in Evans County and has also been a volunteer firefighter for years.

Her career started well before her time in Bulloch County with an ambulance service in Savannah. She worked as a dispatcher there while awaiting an EMT position opening. She had not planned on continuing to work in that capacity too long, but when she had her two children, it just made more sense.

In September 1991, she came to Bulloch County to work as the 911 Director. The county was in the process of getting their 911 system off the ground when it was still in the basement of the annex building on Main Street.

In 2000, Barnard left to work as the first ever Director of 911 Services in Tattnall County where she was responsible for helping the county get the E-911 system online, which meant mapping the physical addresses for the entire county. It took almost a year, but the county was ready by the deadline of December 31st. The experience better prepared her for assisting her home county of Evans County with the same process just a few years later. She worked in Tattnall for seven years before returning to her position in Bulloch County in 2007. She’s been serving in that capacity ever since.

Most people have no idea how complex the Bulloch County 911 center really is. The county’s services go well beyond the county lines as Candler and Evans both contract with Bulloch County for 911 services. In addition to the contracted services, there is an interoperable communications network through Southeast Georgia Regional Radio Network, which entails Bulloch, Bryan, Camden, Candler, Chatham, Effingham, Liberty, and Glynn counties and, of course, the personal working relationships that allow counties to lean on one another for assistance when necessary.

The streamlined technology is always a practical benefit, but particularly important in situations such as the one back in March, in which a man kidnapped a woman in Tattnall County and led police on a multi-county chase through Evans, Candler, and Bulloch before stopping just shy of the Bryan County line. Dispatchers were able to keep an open line with the kidnapped woman, who continued to call 911 for most of the chase.

With the fiscal year wrapping up on June 30, Bulloch County is on track to have handled 130,000 calls in a 12-month period. Barnard doesn’t spend much of her days dispatching those calls these days, though she will go in and work a back-up desk when the phones are ringing off the hook. Instead, she oversees the operations for the counties, ensures all of the systems are working as they should, and supervises the staff that field hundreds of calls each day.

Until last year, Barnard was on-call 24/7. That’s when she started alternating with shift supervisors who will be on-call for one month followed by Barnard for a month, another shift supervisor, and then Barnard again. The alternating has alleviated some of the nights and weekend calls, but if something big happens, it’s Barnard who is en route to resolve it.

It’s obvious that Barnard doesn’t quite see all she does to keep the 911 center running as efficiently as possible and so seamlessly that most people don’t even know all that’s going on behind the scenes. After all, Barnard was selected for an interview for the First Responder Spotlight, which was supposed to highlight her career and dedication to Bulloch County, but she spent much of her interview touting accomplishments of the county as a whole, explaining additional progress she would like to see over the next few years, and praising the hard work of the dispatchers in the control room.

Looking back over the last 14 years in Bulloch and the last 33 in the field, she says the job she has now was a natural progression. “I am able to help people, but in a different way than I originally envisioned. But I love the job. I won’t say there aren’t headaches. There are hard days. It’s a lot like a marriage – you’re going to have your ups and your downs, and those downs need time to level out, but there are far more ups than downs.”