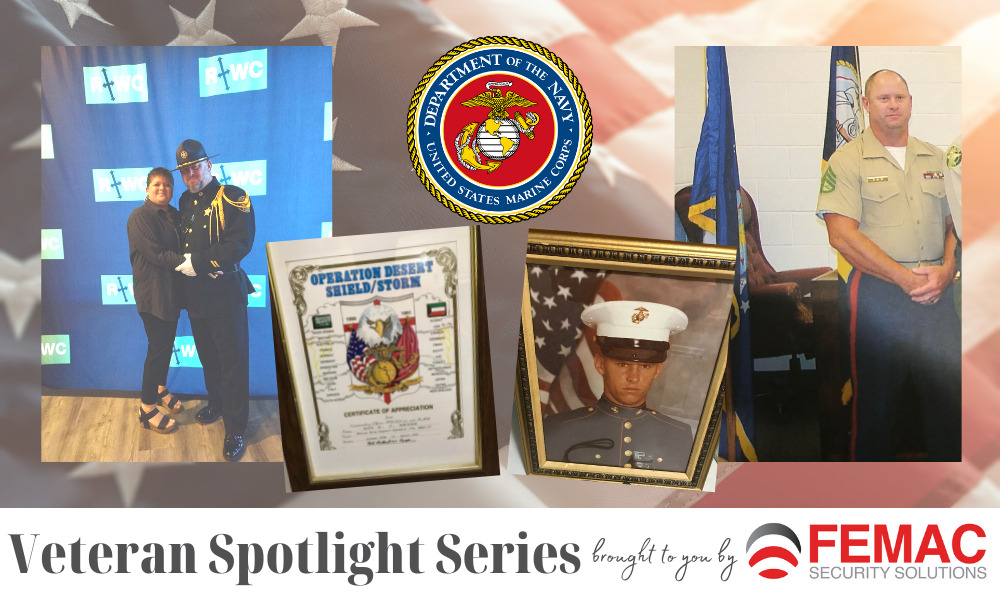 Ferdinand, Indiana. Today, the small town has a population of 2,157 across two and a half square miles. When Randall Weyer was growing up, the United States Marine Corps was a pathway out of the even smaller town of 1,427.

It was a decision he was certain of by the time he was a junior in high school. Military service was a familiar concept in his family. His stepfather was a Marine, his father was in the Army, and his grandfather was just a quintessential hard worker.

After doing well on the ASVAB, he knew he wanted to go into mechanics in some capacity because of the skills he already possessed. Weyer wasn’t a bad kid, though he had a tendency to get into mischief. While his mother and sister had to play a vocal and instrumental role in getting him to class each day, he worked for his grandfather and for the school after school hours, and his work ethic was sufficient to propel him.

Weyer graduated high school in January of his senior year and on March 27, 1983 he left for Marine Corps boot camp in Parris Island, South Carolina, a decision he never regretted.

The 12-week physically intensive school was a journey all of its own. He began in the 46th Platoon in the 3rd Battalion before he was pulled out after three weeks and ‘recycled’ to the 2nd Battalion where he started camp all over again on Day 2.

“I was undisciplined,” Weyer said. “Back then, they had to pick one or two people. They would  use the process to show it could happen. It was me and one other guy and I think they thought I was going to quit.”

Of course, he didn’t quit and ultimately, Weyer graduated in July 1983 with the 49th Platoon in the 2nd Battalion.

After completing basic training, Weyer was shipped off to Camp LeJeune in Jacksonville, North Carolina for his MOS school. He was ‘early’ for class – by a little more than two weeks – prompting him to work for the battalion admin in the interim. He then learned he was slated to be trained as a Basic Hygiene Equipment Operator. He became a Water Purification Specialist and was cross trained for other utility administration, like plumbing.

Though he knew what the job descriptions meant, Weyer really didn’t comprehend at the time what the speciality would tee him up for as his career progressed.

Camp Pendleton, California with the 7th Engineer Battalion was the next stop after 12 weeks of MOS school. This is where he began doing the job and Weyer stayed there for roughly a year. In his working capacity, he was also elected to be the one responsible for maintaining trailers at the shop, servicing mount generators and other equipment and expanding his skill set.

His tenure there also allowed for his training in 29 Palms, California. His five-person team would go out to the middle of the desert with a well drilling rig and a Jeep…and drill. It was one of many moving parts of a training exercise for infrastructure implementation in environments without suitable resources. 200 miles to the closest infrastructure with water would prepare Weyer for what was to come in the somewhat near future.

Lance Corporal Weyer was stationed in Okinawa, Japan where he oversaw all of the water purification operations. From there, he and his five-person team supported operations in Korea, to include showers, laundry, basic plumbing and clean water. The around-the-clock responsibility was on Weyer’s team for three months. While there, Weyer completed Warfare Training School. A four-month stint in Mount Fuji, Japan followed Korea, again in a support role at a base for some 200 other service members.

In 1985, Weyer returned to Beaufort, South Carolina. He married in 1986 and during his time back stateside, he worked in equipment maintenance for the Marine Wing Support Squadron.

1988 brought change when Weyer was stationed in Hawaii. When he had three years in the Marine Corps, he was given the opportunity to re-enlist a year early. In doing so, his ‘wish list’ locations were priority…with Hawaii being one of them. There, he went to a Marine Wing Support Squadron and supported fixed wing, F18s, and the like. The role in supporting personnel was focused on water and refrigeration, including preparations to ensure the ability to build a morgue. He was promoted to Corporal and then Sergeant during that time and continued his education in heavy equipment operations

While stationed in Hawaii, Weyer was deployed for Operation Desert Shield/Desert Storm. On August 8, 1989, he and his fellow service members went to Saudi Arabia and Kuwait. He spoke of their arrival in an indescribably contentious environment and their visit to a soccer stadium under King Abdul Aziz. The troops slept in the concrete soccer stadium for a month as they built a base camp for the forthcoming rotary wing for helicopters.

Sergeant Weyer, by that time, and his unit were charged with establishing a means of back up power and converting salt water to drinking water. That entailed setting up an operation on the beach some two miles away and ensuring the base had 150,000+ gallons of water on hand at any given time.

“This was my first time of truly having to show up and utilize all the assets and resources I knew how. Setting up infrastructure for everybody, scheduling laundry and showers and ensuring the numbers matched the demand,” he shared. “We couldn’t just run to the store or track down what we needed. If we didn’t have it, we had to find another way and fast.”

Weyer talked at length about the impact of being away from his family and the hardship on both himself and those back home. A bright spot, however, was not just receiving letters from his loved ones, but also from a class of school children who wrote to him and his fellow service members. He corresponded with one from his base for the entire deployment and made it a point to meet the young child at his school upon his return in 1990. Of course, that entailed speaking to the entire class and sharing stories about his time in Saudi Arabia.

Back in the States

From 1991 to 1995, Weyer worked his job in a quasi-civilian capacity near Camp LeJeune working in Hazardous Waste, again furthering his education, and garnering accolades for the work with the EPD. Weyer said one of his greatest accomplishments while in the Marine Corps was attaining the Hazardous Waste Management training and certifications. “I was in charge of anything that came on the base and anything that left hazardous waste-wise. I tracked it from when it came into the grave,” he said.

Statesboro became ‘home’ after his children took to the schools in Bulloch County. “It was time for me to make that sacrifice for them,” Weyer said. For the duration of his remaining time in the Marines, he commuted back and forth from Statesboro to Beaufort.

Albany, Georgia was another stop for Staff Sergeant Weyer and his family. “That was a culture shock for my children,” Weyer shared humorously. He re-enlisted with Albany as a top choice to be closer to family. In his new home, Weyer was in charge of the Emergency Maintenance Department.

In 1997, he attended Recruiter School in San Diego, returned to Albany, and relocated his family to Statesboro, Georgia where he began working as a recruiter for the U.S. Marines. A year later, he began commuting to Beaufort, South Carolina from Statesboro on a daily basis to work in the Marine Wing Support Squadron as the Non-Commissioned Officer In Charge (NCOIC) over utilities. His knowledge in hazardous waste management propelled him to the Hazardous Waste Safety Officer for the Battalion.

Though he was by no means ready to exit and was still able to meet (and exceed) the physical standards, a medical issue stemming from a spinal compression and a subsequent surgery ultimately led the Marines to rely on a VA medical doctor’s decision to recommend discharging Weyer from his duties. In 2000, his career with the Marines was over.

Life After the Marines

Weyer had been working part-time in landscaping in Hilton Head, so the transition to full-time was natural. Though it was a stark contrast from everything he’d ever done, Weyer says it had a peacefulness about it along with the daily sense of accomplishment. He enjoyed the job to the extent that he didn’t think he’d ever find himself job hunting again, but 2008 happened and he once again adapted. A brief stint with the City of Statesboro led Weyer to work for the county jail in the maintenance department.

It was fairly short-lived, however, as Weyer found himself in jailer school and then becoming a POST-certified Peace Officer in 2011. He was promptly hired by the Bulloch County Sheriff’s Office, a transition that he says was not just an easy one, but a sensible one.

“It’s what I know. Protecting people, physical activity, something different all the time,” he said.

The Impact of the Marines

While he misses the camaraderie and the people with whom he worked, Weyer says like all things, the culture of the Marines has changed. “Like law enforcement mimics society, so does the Marine Corps,” he said.

These days, Weyer’s 17-year military service career is displayed in paperwork bound in a three-ring binder. Documents detailing Certificates of Good Conduct, Letters of Appreciation, Navy Achievement Medals, and much, much more overwhelm his file, but not his conversation about what he took away from his time in the service and why. That part of the tale is best told in memories and stories by Weyer himself.

The Marines gave Weyer the opportunity to independently build the life he wanted in the way he wanted while simultaneously experiencing places and things outside the confines of Ferdinand, Indiana.

“I love people, I love culture, and I love learning. I have experienced all of that while making a life for myself and my family and serving my country. Of course, people helped me along the way, but I put in the work for it. What I built – I can say I actually built,” Weyer shared.