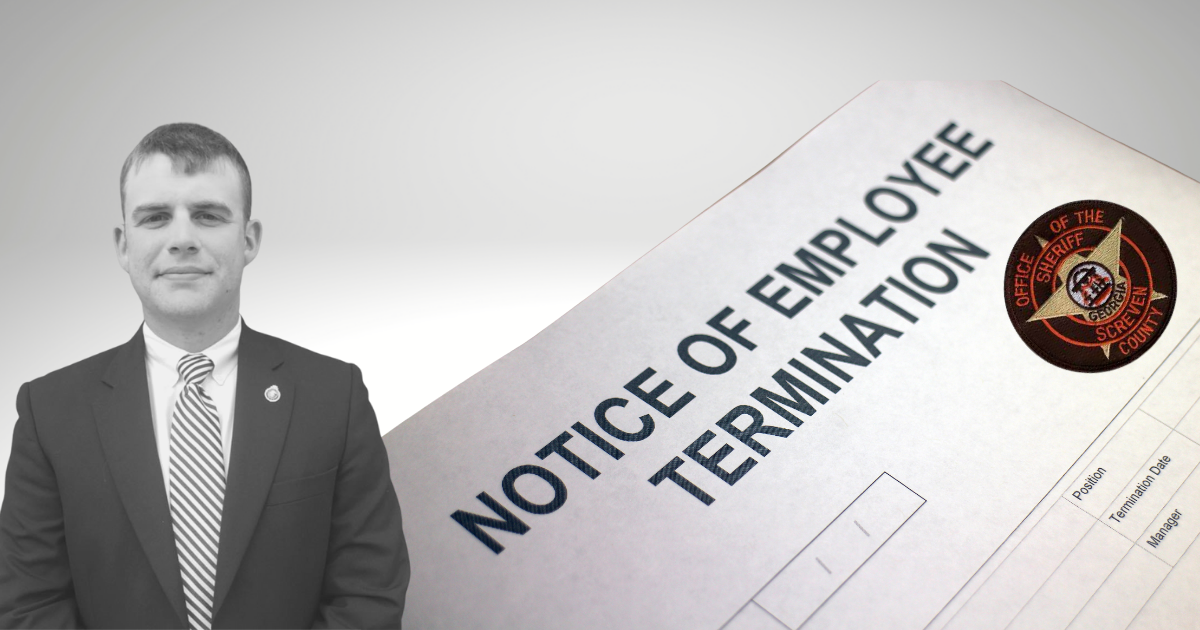 The two deputies under POST investigation seeking employment at the Sheriff’s Office in Bulloch County won’t be hired after all.

TheGeorgiaVirtue.com reported Tuesday that Chase Hutchens and Maurice Lester had pending employment offers with the Bulloch County Sheriff’s Office. Sheriff Noel Brown said Friday, however, that neither will be working for the office.

For one contender, the rescinded employment offer stems from an incident with a detainee and the subsequent termination from the Screven County Sheriff’s Office.

Brown said a formal offer was never extended to Lester, who has been under POST investigation since the summer of 2020 when it was alleged that he was involved with an inmate. Lester was a supervisor with the Bulloch County Sheriff’s Office and was not assigned to the detention center as part of his duties. He ultimately resigned in lieu of termination following an investigation. The POST council voted in early 2021 to revoke Lester’s certification, however, Lester appealed the decision and further action has been pending ever since.

Sheriff Brown did not elaborate on any specifics, but stated Lester would not be employed with the office in the near future.

The case of Chase Hutchens varies slightly, however. The TGV article on Hutchens detailed a laundry list of concerns from past agencies by which Hutchens was employed. His tenure with the Tattnall County Sheriff’s Office, Ludowici PD, Hinesville PD, Bryan County Sheriff’s Office, Pembroke PD, and the Screven County Sheriff’s Office – all since 2017 – detailed write ups for using GCIC to obtain contact information of a female motorist he pulled over, allegations of solicitation of sex for money with an undercover GBI agent, and issues with his patrol vehicle both on and off-duty. Even still, Bulloch County Sheriff Noel Brown was willing to extend a chance to Hutchens.

On Tuesday, Brown told TGV that Hutchens was offered a position at BCSO and would be on probation for one year from the start of his employment. Hutchens was slated to work at the Bulloch County courthouse and his Screven County Sheriff’s Office personnel file indicates a letter of resignation with two weeks notice was submitted to Sheriff Mike Kile on May 9, 2022.

However, the resignation was overridden by a termination when the Screven County Sheriff’s Office learned of another incident involving Hutchens.

After the TGV article was published on May 10, a female contacted the Screven County Sheriff’s Office on May 11 to file a complaint against Deputy Hutchens.

According to the Supplemental Report, the female reported to MSG Steve Singleton that Hutchens arrested her for DUI and another misdemeanor charge before making unwanted advances toward her.

As written in the report:

The Supplemental Report from Investigator Anderson goes into additional detail about the events on April 29th and 30th.

Anderson pulled body camera footage from the incident and discovered that “Deputy Hutchens purposefully stopped his camera from recording once he had placed [redacted] into his patrol car…No additional footage was recorded by Hutchens during the entire time [redacted] was in his custody prior to entering the jail where the in-building footage captured them.”

The report goes on:

“[Redacted] made several statements to her that led her to believe he was interested in her as being a reason she was arrested. She further advised that once inside the patrol car, Hutchens gave her a $100 bill to pay for her bond. After she bonded out, Hutcheson drove her home. Shortly after being home, she reported that Hutchens began contacting her via phone calls and texts…the calls and messages began shortly after Hutchens had dropped off [redacted] in Hiltonia and continued for several days.”

The report says the female did not allege any physical interaction between her and Hutchens but stated “his actions made her feel uncomfortable.”

“During his interview Hutchens did admit to providing the $100 to [redacted] and giving her a ride home after she bonded out. He denied the allegations that he made any inappropriate comments or statements to her about his duties. At this point, Hutchens was asked to write a statement. He advised he would and was left alone to complete the statement.”

“Once the statement was completed, MSG Singleton’s interview with Hutchens continued. Hutchens admitted to texting and calling [redacted]. Hutchens advised he was familiar with her prior to the arrest. Hutchens advised that once they stopped communicating, he blocked [redacted] and deleted her from his phone.

“At this point, SGT McMillan entered the interview room and the decision to terminate Hutchens was relayed to him. He was initially calm and accepting of this then became visibly upset and began asking if he could be allowed to resign instead. MSG Singleton advised Hutchens he would relay the final decision to him when it was filed. Hutchens was advised of the procedures to return his department inventoried items and receive his paycheck.”

“It was determined that Deputy Chasten Hutchens did knowingly violate departmental policies and standards as alleged in this incident.”

“The decision to terminate Chasten Hutchens was made on May 12, 2022 by Sheriff Mike Kile.”

As was the case with Lester, Sheriff Brown told TGV that Hutchens would not be working for the Bulloch County Sheriff’s Office.

Bulloch Inspections May 1-7 are public information, published by the Georgia Department of Public Health, and posted in a conspicuous location at the establishment....