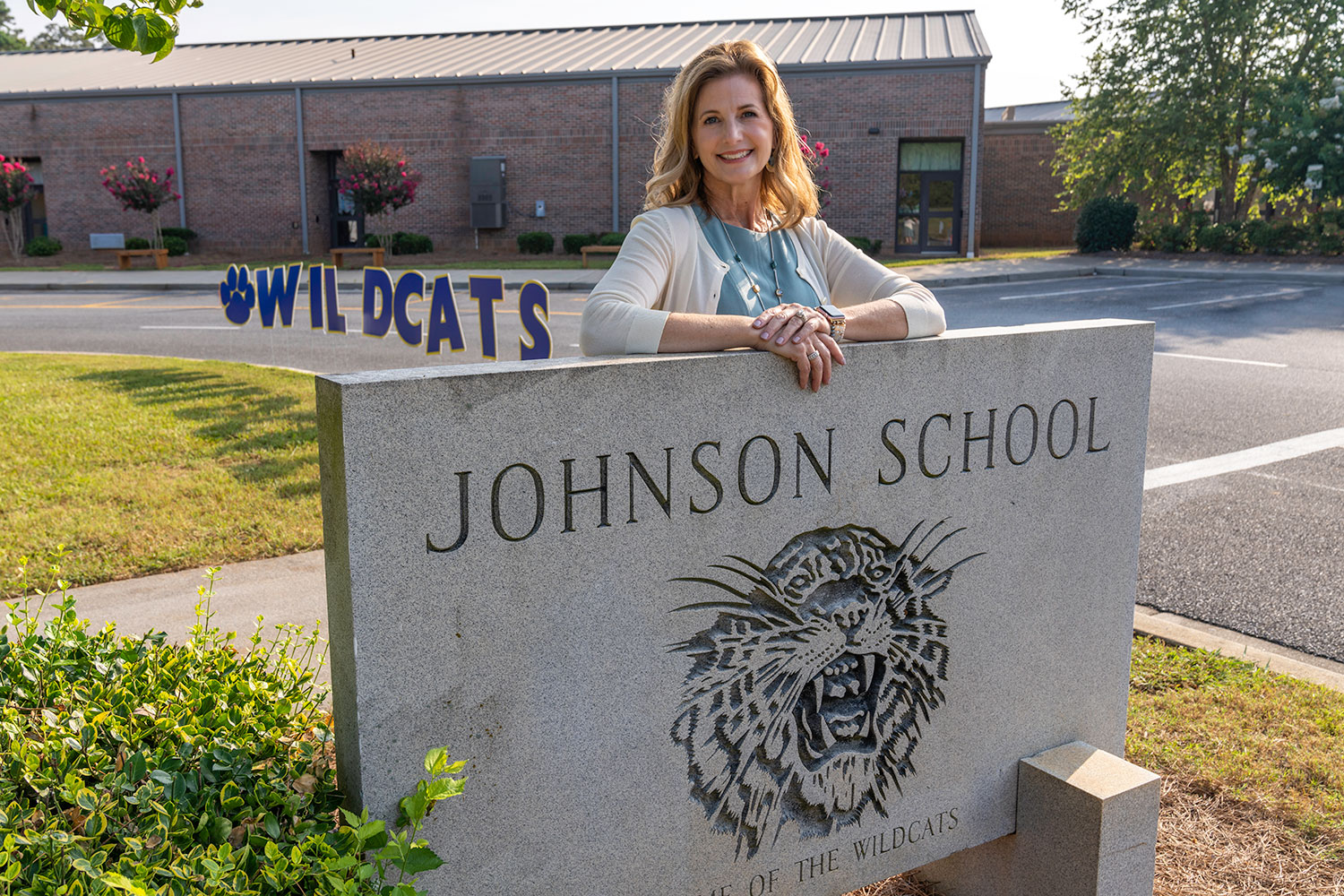 Education duo. Husband and wife. Georgia Highlands College alumni. Assistant Principal. Teacher. And the list goes on and on for Robert and April Cummings. The path to becoming stand out members of the Floyd County community all started at Georgia Highlands College (then Floyd College) where both Robert and April found their start, leading to longtime careers in the Floyd County School System.

After attending GHC (then Floyd College) in the late 1980s and graduating from the University of Georgia (UGA) with a bachelor’s degree in journalism, April worked for News Publishing Company for 10 years in the field of local and corporate advertising. It wasn’t until she and her husband, Robert, had their first child that she fell in love with education.

“I read to our son constantly, and teaching him during those first few years as he developed early literacy skills captivated me,” April said. “We decided I should explore a new career and earn a graduate degree in early childhood education.”

April went on to spend 15 years teaching students in the primary and elementary grades, shaping who she would become in her administration role.

Since July 2017, she has served as Assistant Principal at Johnson Elementary School (JES).

Throughout the day, April’s goal is to focus on what is best for JES students and to support teachers by ensuring students receive the best opportunities for academic and emotional growth.

Focusing on this goal, April is often found in the classroom assisting a teacher, in the hallway helping a class during transitions, in a meeting with a parent, planning instructional supports for students within JES’ professional learning communities (PLCs), or collaborating with the principal and school staff to develop and sustain a rigorous and positive school climate.

This past summer, April also served as the administrator for Floyd County School’s first Summer School program for upper elementary and middle school students across the system.

“On rare occasions, I have even been seen wrestling in an inflatable sumo costume or serving as a human sundae with our principal in the gymnasium as part of a school fundraiser reward at Johnson Elementary,” April said. “Although educating children is serious and important work, achieving and growing together as lifelong learners should be fun, too.”

She said her time at GHC prepared her academically and helped her prepare for managing school and work. In addition to being a student, April worked at GHC’s Office of Admissions, gaining valuable experience in working with and for others while helping them to be successful.

“Georgia Highlands College provided me with the foundation of collegiate academic success, and I will always be grateful,” April said.

In the early 1990s, after serving in the Air Force and continuing as a reservist, Robert enrolled at Georgia Highlands College (then Floyd College).

“GHC was conveniently located close to home, provided a schedule that allowed me to work full time and earn my degree, while continuing to serve in the Air Force Reserves,” Robert said. “After completing my associate degree at GHC, I was able to smoothly transition to Shorter College and pursue my bachelor’s in education degree.”

Robert has been serving Coosa High School since 1996 as a social studies teacher prior to entering his current role as the Lead Special Education Teacher. Each day, Robert works with students who benefit from academic support services as part of their educational plan for success.

“I am able to work one-to-one with students and assist within particular content areas of focus, and I also work with small groups of students at a time to help them strengthen and clarify concepts and skills, rotating through different classrooms throughout the day to support both students and the general education classroom teacher,” Robert said.

Robert also meets with teachers, parents and administrators regularly to develop and monitor educational plans and serves as the point of contact for many parents, establishing a direct line of communication while ensuring that students are making progress toward their goals.

“I have always believed that the development of these critical relationships are an investment in each student’s future,” Robert said.

Robert originally entered the field of education with aspirations of serving students both inside and outside of the classroom and is thankful for being able to take on multiple coaching roles while also teaching students. During late winter or early spring, Robert can be found on the golf course, serving as CHS’ golf coach.

He said the reward of serving students continues long after the school year or the sport season has ended when reuniting with former students outside of CHS and hearing an update on their lives or recalling a specific lesson that may have stuck with them or made them appreciate history once they took his class.

“The greatest reward as an educator is knowing that the time you invest in a student makes that type of lasting positive impact,” Robert said.