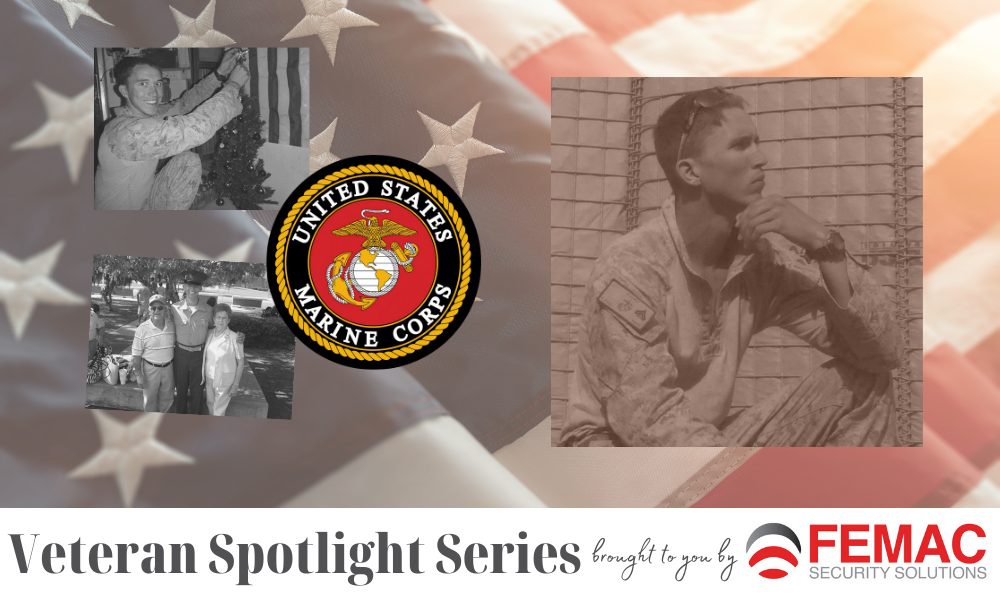 Clyo native Caleb Grovenstein comes from a family of service, but that only partially explains how he came to serve six years in the United States Marine Corps, complete two tours in Afghanistan, and return home to serve his community on a local level.

Grovenstein’s father spent twenty years in the Navy and his grandfather on his mother’s side was in the Air National Guard, so he knew he always wanted to join the military as well. But while the Effingham County native planned to join the Marine Reserves, attend school, and work toward a law degree on a six-year contract with active and inactive reserves, the universe had other plans.

Grovenstein enlisted while he was still in high school in October of 2008 and left for Parris Island, South Carolina in May 2009 – two days after he graduated. After 13 weeks of learning the basics at Parris Island, ten days of leave followed, and then it was on to the School of Infantry at Camp Geiger where he was trained in patrol tactics, weapons capability, and the components of being an infantry member. Finally, Grovenstein was transferred to Fort Leonard Wood Missouri for 3 months from September to December 2009 to train for his Military Occupational Specialty (MOS) as an Engineer Equipment Operator.

He was able to return home for a brief period before reporting to his unit – the Landing Support Company in Savannah – and began college classes the following semester. But in February 2010, after just two months in school, Grovenstein received orders indicating he would be deployed to Afghanistan.

It certainly wasn’t what he planned or expected, but when asked if he was mentally prepared for what was ahead, Grovenstein said he wanted to go. “And skill set wise, I was absolutely prepared. Did I trust the people I was going over there with? Absolutely. I don’t know if you can really be ready for your first deployment.”

Preparing for deployment following receipt of his orders began upon notification with everything from work-ups and license preparation to additional training in both Camp Lejeune and California. He was promoted from Private First Class to Lance Corporal and in July 2010, his unit of roughly 800 deployed and was on the ground in Afghanistan.

It was just as it is described by everyone else who has been there: extremely hot during the day with a 50 degree temperature swings at night, provincial, desolate, foreign, and stressful, but somehow still manageable because they chose to be there, Grovenstein said. While there was not much downtime, he said there was still time for the camaraderie that is built with those you serve alongside. He grinned as he talked about how they would collectively open shoe boxes of letters from kids back home.

“It was exciting when they wrote you a letter with an address where you could write them back. I wrote them more letters than I wrote my mom – it was really fun! And we’d all sit around together and open up and all write them back together,” he said.

“Overall, I was ‘at home’ in my duties in Afghanistan. What I wasn’t perfectly ready for was to come home. No one ever prepares you for that,” he said. “You come home back and everybody else has lived out their own life without you. They have jobs, they have families, and you don’t have anything to do.” His first deployment lasted until February 2011.

Grovenstein returned to Effingham County and the Reserve Unit on weekends while working as an electrician during the week. It was a good job with a great company, but far more monotonous than the work he’d done overseas.

Training continued and Grovenstein knew that as he increased in rank, the possibility of being deployed again would increase as well. As relations, politics, and service members changed, the need for experienced leaders to deploy was ever present. And, as was the case before, Grovenstein was ready to go. He says he was always asking when the next deployment would be.

“You’re trained to do one thing: deploy and do your job. Then you come home and it’s mundane and unexciting and you still have the desire to go back. So I found the next opportunity and I went.”

Grovenstein deployed again in July 2013, this time with a different unit and a different set of circumstances in Afghanistan.

“Everything had changed. When I was there in 2010, it was the Wild West. We had certain Rules of Engagement, we did things a certain way, safety was always paramount but commands then understood that we undergo enough stress in our day-to-day activities that we didn’t need the added stress of certain rules on post in the interest of downtime. But when I was back in 2013, it was exactly like being in Camp Lejeune, just in Afghanistan.”

Additionally, much of the ground gained in 2010 and the few years that followed was in transition to the Afghan Army. U.S. military equipment like generators, communications devices, computers, and satellites had to be packed up and taken back to bases, but items like tents and old Humvees were left for use by the locals after the drawdowns. Much of the work was related to the forthcoming drawdown, though it would be another seven years before the U.S. would exit completely.

Grovenstein spoke at length about the difficulties of governing differences in different areas of the nation, particularly in the rural corners far from Kabul where there are multiple generations with varying views of what democracy should be. “We always tried to do our best to extend ourselves for what they needed under the circumstances while still understanding that there is a generational and economic difference in viewpoints,” he said of the slow, and sometimes resistant, change.

But even still, Grovenstein said he was extremely proud of the work his units did during their time there. “When we were drawing down and tearing down these four operating bases, we were part of the largest deconstruction project utilizing ground and air assets since we left Iraq. And we did it with half as many people. At the end of it, looking back, it’s kind of cool, all that was done. But in the moment, it wasn’t anything that we thought was particularly extraordinary.”

The deployment again lasted until February of the following year – 2014. Not long after, Grovenstein was promoted to Sergeant.

Upon returning from Afghanistan the second time, Grovenstein’s time in the Marines was coming to a close. He opted to take some time off for himself, travel, and, at twenty-four years young, figure out what he was going to do with the rest of his life. He sought a career for which he would have the same passion he had with the Marines and ultimately decided to enroll in the police academy at the Georgia Public Safety Training Center. He graduated in 2015 and applied with the Effingham County Sheriff’s Office.

These days, that’s exactly where you can find him patrolling. For the past five years, Grovenstein has worked for Sheriff Jimmy McDuffie and was promoted to the Traffic Unit earlier this year. He’s quite content working where he is and hopes to become a K-9 handler for the agency in the future.

Grovenstein says his time in the Marines adequately prepared him for a career in law enforcement because of the ways self-discipline and service are instilled. “Both are about a common goal – something that doesn’t necessarily benefit you, but benefits everybody as a whole. And while I think that serving in the military may help you, maybe even give you an edge in some ways, it’s also about the drive and the desire to do it and do it well.”

Reflecting on his time in the service, Grovenstein said he has only fond memories of his time, but wouldn’t necessarily do it again now. “Do I wish I could do it again with the exact same guys under the exact same circumstances? Absolutely. But things have changed, things are different,” he said. Even so, he is most humbled by the fact that Marines still serving call him for his perspective and advice.

“It pales in comparison to any medals or certificates or an accomplishment given by USMC command staff, when you have people you’ve been entrusted with leading and educating and leading into battle continue to call you and input years after you’ve even seen each other, that lives a bigger mark than anything else.”