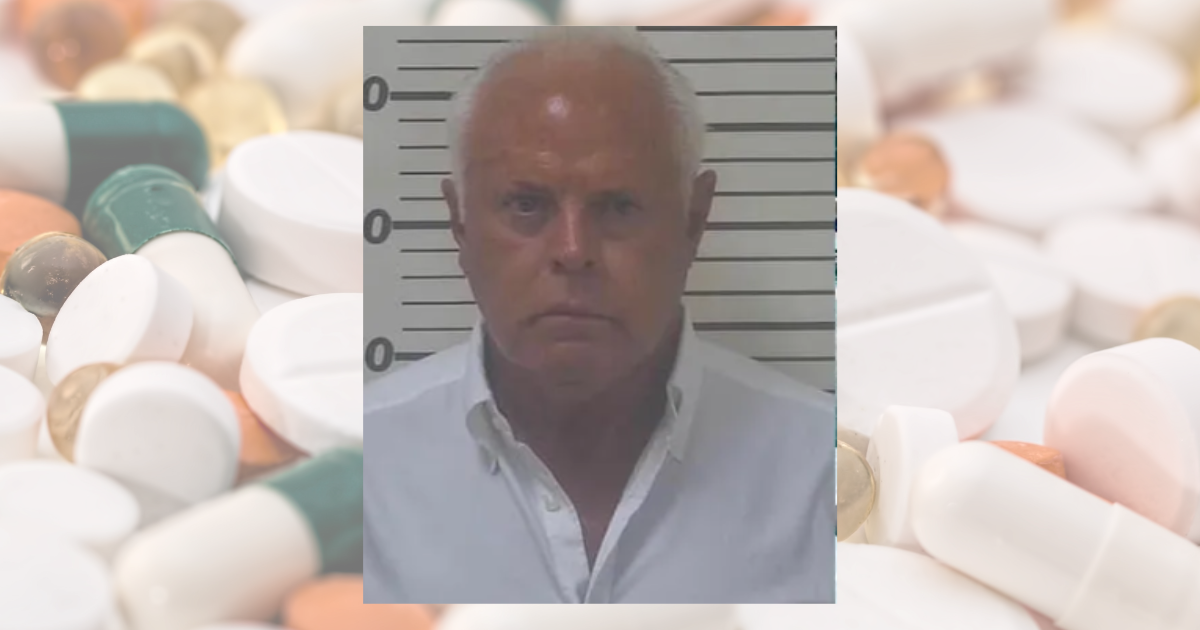 A Coffee County, Ga., physician has been sentenced to five years in federal prison after he admitted to participating in a drug trafficking conspiracy that distributed massive amounts of addictive controlled substances from pain management and addiction clinics.

Dr. Wallace Steven Anderson, 68, of Douglas, Ga., was sentenced to 60 months in prison after pleading guilty to Conspiracy to Unlawfully Distribute and Dispense Schedule IV Controlled Substances, said David H. Estes, U.S. Attorney for the Southern District of Georgia. U.S. District Court Judge R. Stan Baker also fined Anderson $35,000 and ordered him to serve a period of supervised release after completion of his prison term. There is no parole in the federal system.

As part of his plea agreement, Anderson forfeited more than $200,000 in cash and three vehicles, and agreed to pay a total of $46,378.61 in restitution that includes paying the funeral expense for one individual who fatally overdosed on drugs provided through the conspiracy.

“Dr. Anderson betrayed his oath and betrayed his medical credentials to illegally dole out significant amounts of addictive drugs, including opioids, fueling our communities’ addiction crisis while lining his pockets,” said U.S. Attorney Estes. “We commend our law enforcement partners for their stellar efforts in shutting down this white-coated dope-dealer.”

Anderson was the owner of Steve Anderson, PC, and Steve Anderson Behavioral Health, both located in Douglas, Ga. In pleading guilty, Anderson admitted that from Feb. 1, 2016, to Sept. 30, 2020, his nominal pain management and addiction facilities distributed alprazolam, temazepam, and clonazepam “not for legitimate medical purpose and not in the usual course of professional practice” by providing pre-signed refill prescriptions prior to patient examinations.

The investigation of the practice determined that the conspiracy issued nearly 160,000 prescriptions for controlled substances while ignoring numerous “red flags” indicating that the prescriptions were not issued for legitimate medical purposes.

Two employees at the clinics, Bridgett Stephanie Taylor, 55, of Broxton, Ga., a Nurse Practitioner who worked under Anderson, and Wandle Keith Butler, 57, of Douglas, a Physician Assistant who worked under Anderson, were sentenced in August 2022 after each pled guilty to Conspiracy to Unlawfully Distribute and Dispense Schedule IV Controlled Substances. Judge Baker sentenced Taylor to 48 months’ probation and fined her $20,000, while Butler was sentenced to 18 months in prison followed by three years of supervised release, and ordered to pay $2,296.29 in restitution.

“Americans rely on physicians and other healthcare providers to help their patients and to ‘do no harm.’ This pill-peddling physician and his co-conspirators violated the law and betrayed the responsibilities of their profession by unlawfully dispensing highly-addictive controlled substances,” said Robert J. Murphy, the Special Agent in Charge of the DEA Atlanta Field Division. “The law enforcement community is committed to stopping unscrupulous medical professionals from harming patients.”

“This case serves as an important reminder that health care professionals have a duty to prescribe medication responsibly to ensure the well-being of patients under their care. Failing to do so can endanger patients and undermines critical, ongoing public health measures to address the illegal distribution of opioids,” said Special Agent in Charge Tamala E. Miles of the U.S. Department of Health and Human Services Office of Inspector General (HHS-OIG). “Our agency, working with our law enforcement partners, will continue to hold bad actors accountable.”

“Our job as law enforcement is to seek out those responsible for supplying poison, from the street-level dealers to the professional dealers in lab coats. Years of negligence from three medical professionals causing destruction and pain has come to an end with the sentencing of Dr. Anderson.,” said Jeff Davis County Sheriff Preston Bohannon. “Jeff Davis County, Coffee County, Bacon County and other surrounding counties have witnessed the wave of destruction in our communities. I personally want to thank our county investigators that were involved in this case for an outstanding job, and the federal agencies for trusting our work and integrity. I’d like to congratulate the U.S. Drug Enforcement Administration and all other agencies involved for a successful case. I pray that the families impacted by this can finally have some closure and peace.”

The investigation was conducted by the U.S. Drug Enforcement Administration’s Savannah Resident Office; IRS Criminal Investigations; and Health and Human Services Office of the Inspector General; and prosecuted for the United States by Assistant U.S. Attorneys Matthew A. Josephson and Bradford C. Patrick, with assistance from the office’s Asset Forfeiture Unit.

Op-Ed: Nonprofit hospitals need to get back to charity work