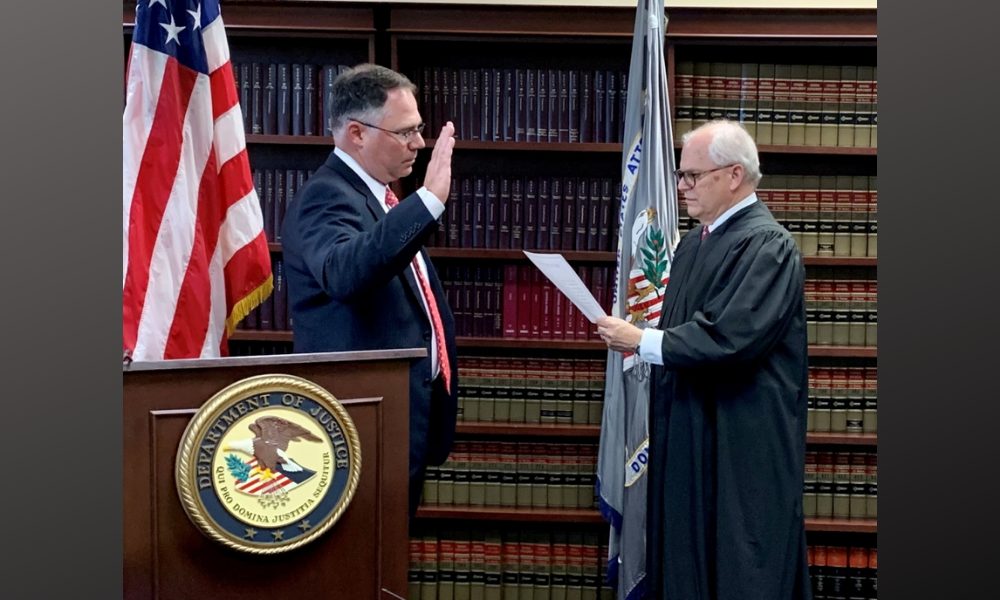 David H. Estes now serves as U.S. Attorney for the Southern District of Georgia after his appointment by U.S. Attorney General Merrick Garland.

U.S. Attorney Estes took the oath of office Friday, Dec. 3, in the Augusta Office of the U.S. Attorney for the Southern District of Georgia before U.S. District Court Chief Judge J. Randal Hall.

“It is truly an honor to continue to serve the citizens of the Southern District of Georgia as we work with our outstanding staff and the exceptional law enforcement partners in the district to keep our communities safe,” said U.S. Attorney Estes. “We are dedicated to upholding the law and defending access to justice for those who live, work, worship and play throughout this district.”

The Southern District of Georgia U.S. Attorney’s Office encompasses 43 counties along the east side of the state, from Wilkes County in the north, along the Georgia coast, to the Florida border in the south, and as far west as Laurens County. The U.S. Attorney serves as the chief federal law enforcement officer for the Southern District of Georgia.

U.S. Attorney Estes, a native of Scottsboro, Ala., received an Associates in Business and his Regular Army commission through the Reserve Officer Training Corps at Marion Military Institute (1987) and a Bachelor’s Degree in English from Auburn University (1989), and in 1993 received his Juris Doctorate Degree from the University of Tulsa in Tulsa, Okla. From 1987 to 1994 he served as a Field Artillery Officer in the Alabama and Oklahoma Army National Guard, and after law school served on active duty with the Judge Advocate General’s Corps for three years at Redstone Arsenal, Ala., Office of the Staff Judge Advocate.

In 1997, Estes joined the Alabama Attorney General’s Office, Violent Crimes Division, as a violent crime prosecutor. During this time, Estes rejoined the Alabama Army National Guard as a Judge Advocate. In 2002, Estes joined the United States Attorney’s office for the Northern District of Alabama (Huntsville Branch Office) as an Assistant U.S. Attorney. Estes assumed the duties of First Assistant U.S. Attorney for the Southern District of Georgia in January 2018.

In his military career, Estes deployed to Iraq from 2004-2005 with the 122nd Corps Support Group and served as the Deputy Staff Judge Advocate and Chief, Military Justice. He was awarded the Bronze Star for his service in Iraq. In October 2013 he was promoted to Colonel and assumed the Staff Judge Advocate position for the 167th Theatre Sustainment Command. Col. Estes previously served as the very first Regional Defense Counsel for the Army National Guard. Estes recently retired from the Army after more than 34 years of military service. He was twice awarded the Legion of Merit Medal for his accomplishments.

Estes was accompanied at his swearing-in ceremony by his wife, Connie Estes. They have four children: Garrett, Madison, Everett, and Gracie, and two stepchildren, Abby and Hamilton, and are members of Christ Church Anglican in Savannah.