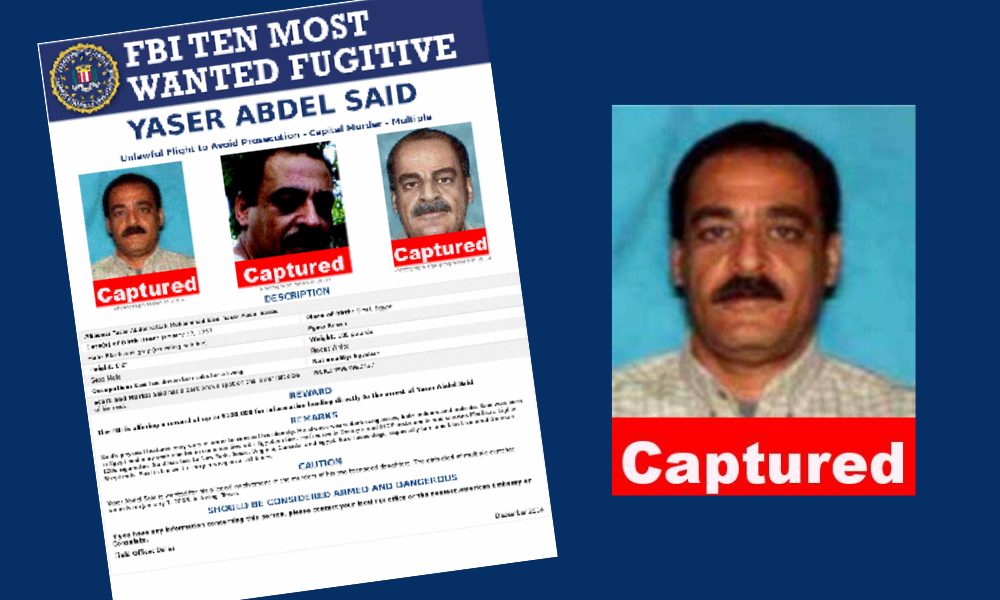 The brother of capital murder suspect Yaser Said has been sentenced to 12 years in federal prison for helping the “10 Most Wanted” suspect evade capture for more than 12 years, announced Acting U.S. Attorney for the Northern District of Texas Prerak Shah.

Judge O’Connor varied upwardly from the sentencing guidelines, writing in a court filing, “the guidelines also do not adequately take into account the extravagant lengths that Defendant and his co-defendant, and perhaps others, went to harbor and conceal Yaser Said… Defendant’s efforts resulted in incalculable resources spent by law enforcement, both locally, nationally, and internationally.”

Yassein Said’s co-conspirator, his 32-year-old nephew Islam Said, pleaded guilty to the same charges prior to trial and was sentenced in April to 10 years in federal prison.

According to evidence presented at Yassein Said’s trial, Mr. Said sheltered his brother from arrest in an attempt to subvert the administration of justice.

Yaser Said had been a fugitive from justice since New Year’s Day 2008, when he allegedly murdered his teenage daughters, Amina and Sarah. According to law enforcement, he shot the girls to death inside his taxicab and abandoned their bodies inside the vehicle. He was captured by the FBI’s Violent Crimes Task Force in August 2020, and is currently in state custody.

Conspiring with his nephew, Yaser’s son Islam, Yassein Said helped harbor Yaser inside an apartment in Bedford, Texas, where a maintenance worker spotted Yaser on Aug. 14, 2017.

He later harbored his brother inside a home in Justin, Texas. On Aug. 25, 2020 FBI agents observed Mr. Said and his nephew deliver grocery bags to the residence, then followed the men to a shopping center 20 miles away, were they dumped trash retrieved from the home.

“Yassein Said prioritized the comfort of his brother, an alleged murder, over justice for his nieces, two innocent teenagers on the brink of adulthood,” said Acting U.S. Attorney Prerak Shah. “No sentence can bring Sarah and Amina back, but we are hopeful that seeing justice served brings a measure of comfort to those who loved these two young souls.”

“Yassein Said protected his brother and accused murderer, Yaser Said, by providing aid and comfort to him while he was a fugitive. By taking the law into his own hands, Yassein Said delayed justice for the victims, Amina and Sarah, and their family,” Matthew DeSarno, Special Agent in Charge of FBI’s Dallas Field Office, said after the trial.