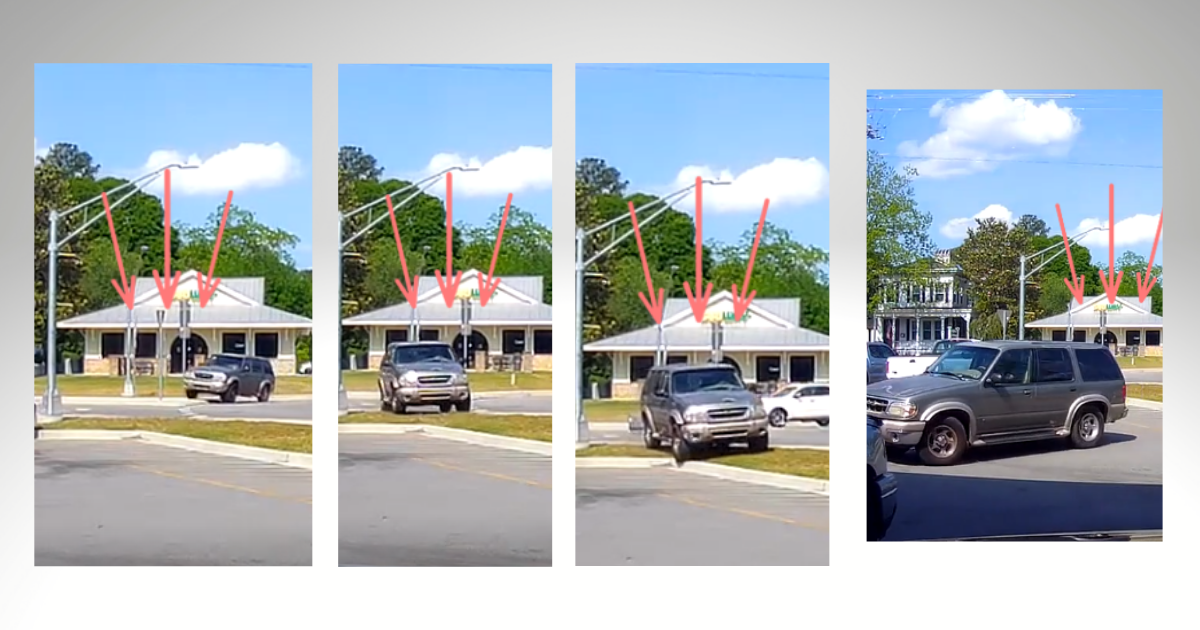 Public records show a concerning response to a reported reckless driver in the City of Guyton.

It began with a call from an off-duty Effingham County Sheriff’s deputy. The concerned deputy contacted Effingham 911 to report the driver, noting he believed the driver may be intoxicated and requested that Guyton PD be notified. Though the off-duty deputy gave officers ample time to prepare, officers never left the roundabout in the heart of Guyton and the driver took out a yield sign and ramped up over the curb into a crowded parking lot before coming to a stop – only after the deputy boxed the individual in with his personal vehicle as Guyton PD arrived.

The collision with fixed objects and the jut into a busy grocery store parking lot were caught on dash camera while the rest of the story was put together with Open Records Requests from the city and Effingham 911.

A VIDEO TIMELINE OF WHAT HAPPENED

The video includes a compilation of audio recordings from the reporting off-duty deputy, from dispatch, and from Guyton PD officers.

Just after 4:00 p.m. on Friday, April 29, 2022, the off-duty deputy contacted Effingham 911 to report a possible drunk driver. The off-duty deputy followed the driver for upwards of six miles, contacting first the Sheriff’s Office and, upon learning no one was in the immediate area, requested assistance from Guyton Police Officers.

The deputy offered multiple locations, a vehicle description, a tag number, and a number of driving behaviors that contributed to his call for law enforcement intervention. He reported the possible drunk driver was:

But as they approached the city limits, no Guyton Officer made an effort to drive toward the suspected impaired driver to intercept the vehicle. That’s not where the gaps in the chain of events stopped, however.

Watch the video for a timeline of events, including the 911 call, radio traffic, and more: (Story continues below)

The booking desk website for the Effingham County Jail showed no inmate was booked into the jail due to an infraction by Guyton PD on April 29, 2022.

The lack of jail booking prompted an ORR for citations issued on April 29, 2022.

The city provided the following document, indicating that no male driver was cited for any infractions: (TGV redacted the names of the individuals cited as their alleged offenses are not relevant to this story)

This document contradicts the radio traffic of Guyton PD and the CAD report, in which Officer B. Johnson stated he issued two citations to the driver.

THE REPORT MADE BY GUYTON PD

The City of Guyton initially tried to block the release of the report, first citing a lack of need and then trying to require a sworn affidavit, which is not permitted under the Georgia Open Records Act. After a number of emails back and forth, the report was provided.

The report is dated May 5, 2022, six days after the accident and one day after the Open Records Request was filed for body camera footage of the time period around the incident.

Most notably, the Guyton Police Department penned in the report that the individual did not appear impaired and was simply fatigued. (The City report redacted only the DOB of the driver. TGV opted to redact additional information in the report below).

Johnson’s report leaves much to be desired in terms of documentation and accuracy.

OTHER NOTABLE FINDINGS WITHIN THE REPORT

The inconsistencies of the citations could be attributed to three possible scenarios:

Nevertheless, the entire report was approved by Chief Breletic on the same day it was written.

A request was made for a four-hour window of body camera footage for three officers on April 29, which would include the initial response, the vehicle search, and the transport home, as well as any follow-up.

The City cited an ongoing investigation and pending prosecution as a reason to withhold the body camera footage. The denial appears to reflect an inconsistent approach to Guyton PD files as the agency released names of motorists cited for other offenses from April 29, 2022 when the citations have yet to be adjudicated and has done so on numerous occasions in the past.

Further, it should be noted that the Georgia Open Records Act cited by Brown does not require the city to withhold documents, it only permits the city to do so at its discretion. If the city desired to eliminate all questions about the handling of the crash, it could release the body camera footage.

NOT THE FIRST TIME

Guyton PD came under fire for a similar incident in 2020. According to court records, in 2019, then-Officer Joseph Coppola stopped an impaired driver.

On April 23, 2019, Coppola was notified of a possible drunk driver after a concerned citizen notified him of a driver stumbling in the parking lot of a Guyton gas station and then swerving erratically as he left the business and began traveling on Highway 17. Coppola subsequently initiated a traffic stop just after 10:00 p.m. with the driver of a black pick-up truck identified in 911 dispatch audio as Christopher Hollis. Coppola called the tag information and driver name into dispatch with the stop location and after several minutes, reported back to dispatch that he issued two citations and was following the driver to the address on Old Louisville Road. Public records show Hollis lives on Old Louisville Road – almost three miles from the Parker’s and roughly two miles from the basketball courts at Highland Park where the traffic stop took place.

But inquiries with the City of Guyton and Effingham County Clerk of Courts show no record of any citations issued to Hollis by Guyton police during the month of April or for any traffic offense on or around that date.

Almost one month later on May 22, 2019, the same driver – Christopher Hollis- was just outside the city limits of Guyton on Old Louisville Road when he smashed into the back of a school bus transporting children and was transported to a local hospital. ECSO jail records later revealed that Hollis was charged with driving under the influence of alcohol, following too closely, weaving over roadway, and a seatbelt violation.

The May 22nd DUI made for the second DUI arrest of 2019 for Hollis, the other which occurred on February 2019 and also resulted in an arrest and booking in Effingham County jail. For reference, under Georgia law, a habitual violator is a person who has been arrested and convicted of DUI three or more times in five years.

Coppola was the interim chief of Police, twice removed, and was most recently promoted to the rank of Lieutenant.

In this article:City of Guyton, Effingham County Sheriff's Office