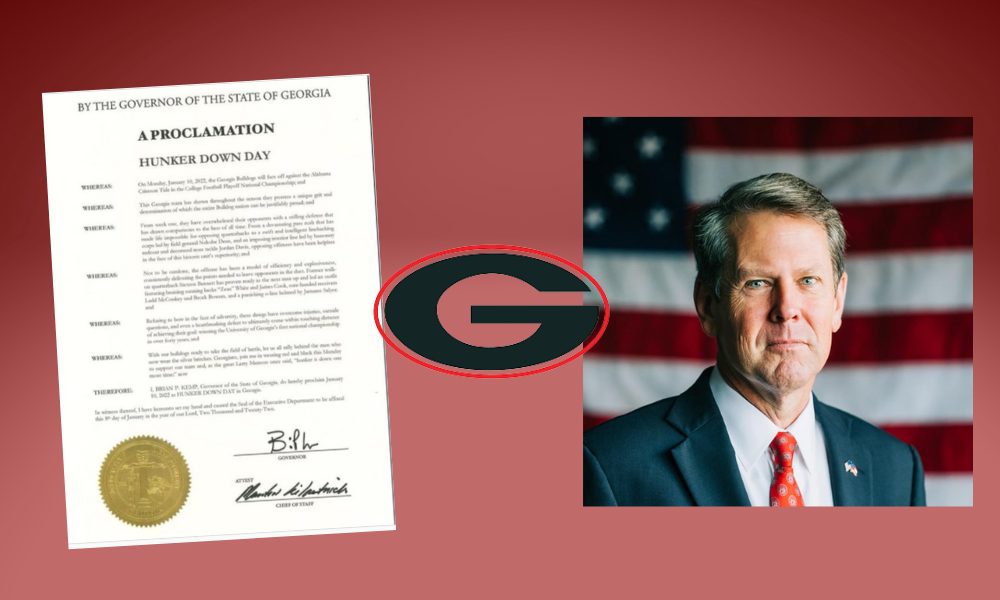 Governor Brian Kemp announced on Saturday that Monday would officially be declared “Hunker Down Day.”

The announcement came as the Georgia Bulldogs prepare for for the College Football Playoff championship game.

On Monday, January 10, 2022, the Georgia Bulldogs will face off against the Alabama Crimson Tide in the College Football Playoff National Championship.

This Georgia team has shown throughout the season they possess a unique grit and determination of which the entire Bulldog nation can be justifiably proud.

From week one, they have overwhelmed their opponents with a stifling defense that has drawn comparisons to the best of all time. From a devastating pass rush that has made life impossible for opposing quarterbacks to a swift and intelligent linebacking corps led by field general Nakobe Dean, and an imposing interior line led by honorary redcoat and decorated nose tackle Jordan Davis, opposing offenses have been helpless in the face of this historic unit’s superiority.

Not to be outdone, the offense has been a model of efficiency and explosiveness, consistently delivering the points needed to leave opponents in the dust. Former walk-on quarterback Stetson Bennett has proven ready as the next man up and led an outfit featuring bruising running backs “Zeus” White and James Cook, sure-handed receivers Ladd McConkey and Brock Bowers, and a punishing O-line helmed by Jamaree Salyer.

Refusing to bow in the face of adversity, these Dawgs have overcome injuries, outside questions, and even a heartbreaking defeat to ultimately come within touching distance of achieving their goal: winning the University of Georgia’s first national championship in over forty years.

With our Bulldogs ready to take the field of battle, let us all rally behind the men who now wear silver britches. Georgians, join me in wearing red and black this Monday to support our team and, as the great Larry Munson once said, “hunker it down one more time.”