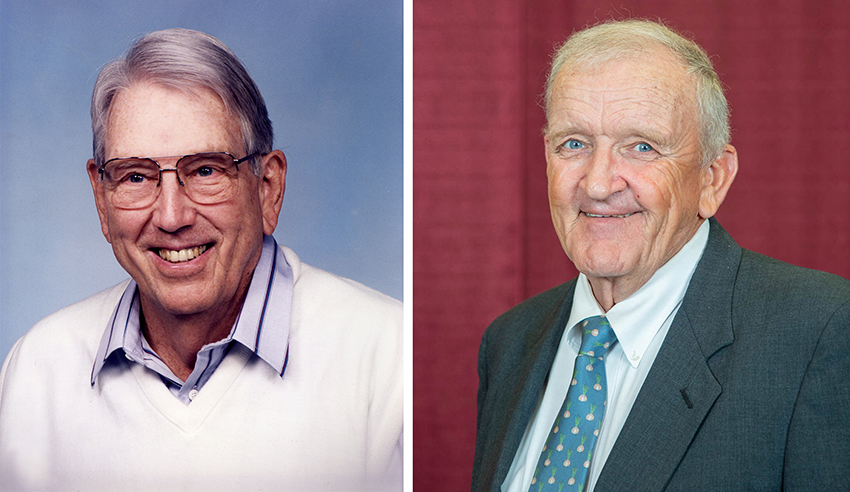 A pioneer in poultry and a producer who has been a strong advocate in agricultural policy will be inducted into the Georgia Agricultural Hall of Fame on April 9 during the 66th University of Georgia College of Agricultural and Environmental Sciences (CAES) Alumni Association Awards in Athens, Georgia.

The honorees are the late J. Henry Massey, who earned both bachelor’s and master’s degrees in poultry science at CAES, a steadfast leader in the poultry science industry in Georgia, and Georgia Farm Bureau President and third-generation farmer Tom McCall, a 1980 animal science CAES alumnus.

Established in 1972, the Georgia Agricultural Hall of Fame honors individuals making unusual and extraordinary contributions to agriculture and agribusiness industries in the state.

Inductees are nominated by members of the public and selected by the awards committee of the UGA CAES Alumni Association. Those nominated must be of impeccable character, have outstanding leadership skills, have made noteworthy contributions to Georgia’s agricultural landscape and been recognized for achievements in agriculture as well as other areas.

Known nationally as a leader in the poultry science industry, Massey spent 26 years with UGA Cooperative Extension, starting as a specialist and ultimately serving as head of North District and Extension Poultry Science. Throughout his career, Massey developed applied-research and educational programs for his constituents, finding practical, research-based solutions for the state’s poultry producers, and many credit his leadership during the 1950s and 1960s with facilitating the success of what is now Georgia’s No. 1 agricultural commodity.

In nomination materials for the honor, Louis Boyd, a 2013 inductee to the Hall of Fame, said, “Before I was thrilled to move to Georgia more than 40 years ago, Henry Massey was well-known in the USA as Mr. Poultry Science of the South. He indeed deserves to be in the Georgia Agricultural Hall of Fame.”

A U.S. Marine Corps veteran, Massey earned the Okinawa Battle Star during World War II, then spent 33 years in the Marine Reserves, serving as president of the Georgia Reserve Officers Association and on the Resolutions Committee of the National Reserve Officers Association. He was a recipient of the Brigade Volunteer Award, only the fourth Georgian to ever receive the recognition.

Massey served on the Governor’s Committee on Georgia Agriculture and the Advisory Council for Vocational Education in Georgia. After his passing in June 1995, both the Georgia Senate and House of Representatives recognized Massey’s outstanding accomplishments with separate resolutions commending him for his service to Georgia agriculture and the state.

Massey’s dedication to agriculture began at CAES, where he served as president of the Ag Hill Council and was elected to the prestigious AGHON Society. He was an active member of the CAES Alumni Association, serving as its president in 1982-1983 and receiving the Distinguished Service Award in 1984.

Massey was a member of the committee that saved the old UGA Dairy Barn from demolition, raising funds to renovate it into the Four Towers Building, which now houses the CAES Alumni Association, the Georgia Agricultural Hall of Fame, the CAES Department of Agricultural Leadership, Education and Communication, and the UGA Visitors Center. UGA named the Henry Massey Pavilion at the Poultry Research Center in his honor, recognizing his contributions to the poultry industry, the university and its students and Georgia 4-H.

McCall, who owns and operates a grain and livestock farm in Elberton, Georgia, served in the Georgia House of Representatives from 1995 through 2020, representing House District 33. During his tenure, he served on the Natural Resources and Environment; Transportation; and Game, Fish and Parks committees, and he chaired the House Agriculture and Consumer Affairs Committee from 2005 until 2020.

He was the author of important legislation in 2009 and 2019 that protected producers’ rights to farm and operate agritourism businesses.

Hailed as “one of Georgia agriculture’s most modest and influential stewards” in his nomination to the Georgia Agriculture Hall of Fame, McCall was instrumental in legislation pertaining to agriculture that passed the Georgia General Assembly during his 25-year tenure.

A former 4-H’er and ardent supporter of Georgia 4-H, McCall received the 2016 Georgia 4-H Green Jacket Award, one of the organization’s highest honors, and a National Honorary American Degree by FFA in 2005.

He is an active member and volunteer with the Friends Helping Friends Club, a nonprofit service organization dedicated to providing inclusive educational opportunities to special-needs students in Elbert County at no cost to the school system or the students served. The organization was formed by his daughter, Katie McCall Archer, in honor of his late son, Bud McCall.

The awards banquet was held April 9 in the Grand Hall of Tate Student Center at 45 Baxter Street on UGA’s Athens campus.

By Maria M. Lameiras, managing editor with the University of Georgia College of Agricultural and Environmental Sciences.