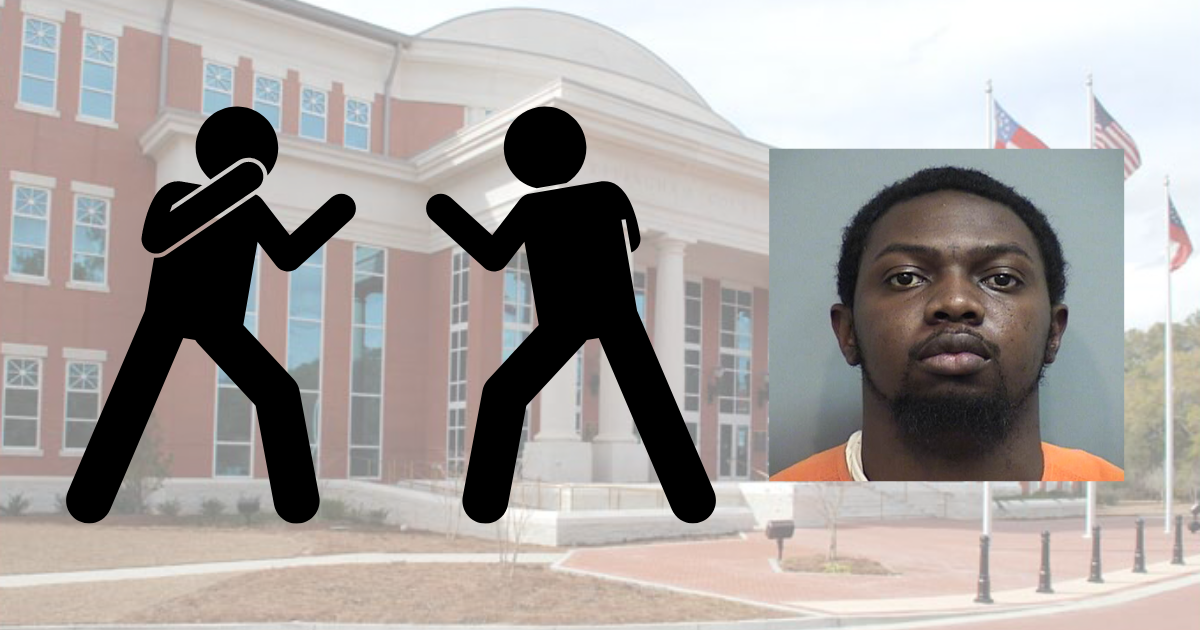 A combative tone and contentious dialogue dominated day two of the multi-felony trial against the man charged with attempting to murder an Effingham County Sheriff’s Deputy.

Franklin Hope Johnson stabbed Sergeant Danny Harrington nine times in 2016 as Harrington and three other deputies attempted to execute a 1013 order filed by Johnson’s grandparents. Harrington knocked on the door and, within seconds, was attacked by a knife-wielding Johnson. A lengthy scuffle ensued as Johnson violently attacked Harrington and, ultimately, it took three deputies, multiple pairs of handcuffs, and two Taser deployments to restrain him.

Initially, Johnson entered a plea of Not Guilty, but that plea changed in 2018 when Johnson stated he was ‘Not Guilty by Reason of Insanity.’ Subsequently, jurors must decide whether or not Johnson’s behavior was based on substance abuse or insanity. .

The second day of the trial in the long-delayed case brought testimony from the GBI agent in charge of the case, Johnson’s father, Johnson’s grandmother, and two individuals with various medical field experience.

Longtime GBI agent Charles Sullenger testified early Thursday morning about his findings in the case. He told jurors that the case was initiated after the Sheriff’s Office asked for an outside evaluation of the Use of Force (Taser deployment, open hand strikes) on Johnson. Sullenger went on to say that it became clear that Johnson was the aggressor and in the days following the incident, GBI command staff made the decision to charge Johnson with Aggravated Assault. The opinion of the agent responsible for the use of force investigation was that Harrington and the other deputies were acting in self-defense and that Harrington was ‘fighting for his life.’

Sullenger also testified that the investigation showed that Johnson took the knife out when he saw deputies entering the yard, furthering the state’s argument that Johnson was waiting for law enforcement and prepared to resist apprehension.

On cross examination, defense attorney Lloyd Murray returned to his earlier narrative that the GBI investigation was less than adequate. He argued through questioning that the GBI failed to conduct a proper investigation and “didn’t even try” to be thorough. He repeatedly asked Sullenger why a test for ‘Spice’ was not conducted. Sullenger testified that no specific test for Spice metabolites was available in 2016 and that the GBI relied on the hospital’s blood tests, which the GBI did not receive until December 2016, because Johnson admitted to the GBI, to medical professionals at the hospital, and to jail personnel that he used Spice.

Murray challenged Sullenger on the agency’s lack of search warrants to locate Spice in the home or vehicle of Johnson, but Sullenger testified that Spice could be purchased at convenience stores at the time of the incident and he was unaware of how he could obtain a search warrant for something that was not illegal to possess. Murray asked why there was no inquiry into the consumption of marijuana or Spice, to which Sullenger replied that there were “more important things that happened on that porch” than additional misdemeanor offenses.

On a second cross examination of Sullenger, Murray again pressed about the GBI’s investigation and what was actually searched on the day of the incident. Sullenger stated for a third time that he was not the individual who searched the house, and that only things pertaining to the scope of the investigation were examined, though he declined to speak on the specifics because that responsibility was assigned to the Crime Scene Specialist (CSS), Sullenger said he could not testify to the specifics. Murray, calling into question the integrity of the work of the CSS, suggested that the CSS should be present in court to explain himself. He then took his seat.

ADA Matt Breedon apprehensively asked Sullenger why that person was not able to testify in court, espousing a very obvious emotion from Sullenger. Leaning back and fighting to keep his composure, Sullenger answered with a tearful, “He committed suicide.”

Murray jumped from his seat and apologized in Sullenger’s direction, stating that he ‘did not know,’ all while wide-eyed jurors watched the exchange.

The suicide of Special Agent Jamie O’Sullivan made national headlines in December 2020 following a series of inaccurate and politically-driven conspiracies circulating online. As a tenured and well-respected Agent who spent the entirety of his career in the region, which includes Richmond Hill, his death rocked both the law enforcement and legal communities.

MOTION FOR A DIRECTED VERDICT

After the state rested, defense counsel made a motion for a directed verdict, asking the judge to halt the trial and find Johnson ‘Not Guilty’ or ‘Not Guilty by Reason of Insanity.’ Murray argued the state failed to prove its case beyond a reasonable doubt. The state, however, argued that the court could not find Johnson ‘Not Guilty’ because Murray admitted in his opening statements that Johnson committed the acts and, therefore, could not say otherwise now. Judge Lovett Bennett denied the motion on both grounds.

Dr. Daniel H. Grant spent three hours on the stand Thursday afternoon as the defense proffered that Johnson had a pattern of mental illness. Grant interviewed Johnson for twelve to fifteen hours over a several month period beginning roughly one year after the incident occurred.

Grant testified that his evaluation found Johnson suffered from delusions, impaired judgment, hallucinations, and perceptual disturbances. He concluded that his behaviors and actions were “unduly influenced at time of incident.”

On cross examination, prosecutors challenged Grant on whether or not he considered Johnson’s repeated diagnoses of “malingering,” or the feigning of symptoms or disorders you don’t have, which were noted at Georgia Regional to be due, in part, because he was in jail.

Ultimately, Grant testified that it appeared he did not have all of the documents that the attorneys had as he was not aware of all of the statements made by Johnson to other parties. Still, he maintained that Johnson was mentally ill and did not consume any substances.

In 2017, the court appointed Dr. Jennifer Rohrer to conduct an independent evaluation of Johnson’s level of criminal responsibility at the time of the act. She testified that she did so in June 2017 at the Effingham County jail. In conducting the evaluation, Rohrer considered testimony of the defendant, background, family interviews, substance abuse, criminal history, and official records. Rohrer’s determination was that Johnson was psychotic at the time of the act, but that it was entirely substance abuse-induced. That substance abuse-induced state, she said, espoused agitation, paranoia, delusions, and psychosis.

She also testified that jail reports and medical records indicated that Johnson would ‘talk to himself and laugh’ when attempts were made by others to interview him, but on the phone with family, he was ‘cognizant’ and coherent. Johnson, she said, reported that he would “go back to illegal drugs” if he was out on the street.

Rohrer also disputed Grant’s testimony, taking specific issue with Grant’s disregard for Johnson’s incidents of malingering, his lack of reliance on legal documents which suggested drug abuse and dependency, and found it concerning that Grant did not assign a diagnosis. She also disagreed with the defense’s position that psychosis is a mental disorder in itself, testifying that she was bound by the DSM IV Manual published by the APA and psychosis is simply ‘symptom.’

On cross examination, Murray boisterously challenged Rohrer’s position and first suggested that she insufficiently informed Johnson of his rights, failing to tell him that she would ‘come to court to try to convict him.’ Following objection, Murray then asked if Rohrer told Johnson that she was going to ‘come to court and testify about things that are adverse to his best interest.’ That, too, was sustained on objection and the court instructed Murray to move on. As his questions continued, he editorialized actions of the court and instructed the witness to “think real hard” before she answered.

Just before 6:00 p.m., attorneys began their closing arguments in the case.

ADA Christy Barker told jurors the defense has only put everyone else on trial – the GBI, the other deputies – in an attempt to deflect from Johnson’s behavior. She asked jurors to ask themselves one question: Did Franklin Hope Johnson commit the acts intentionally?

“It was intentional and you know it,” she told them. “He got high on Spice and he stabbed this officer,” she said as she recounted Johnson’s preparation for a fight.

Murray asked jurors to ‘keep and use good common sense.’ “The fact of this case is that Danny Harrington walked up to the door and Franklin Hope Johnson came out and stabbed him. The state wants you to think that’s because he was on Spice, but they haven’t proven it. Why? Because he’s delusional. He’s insane.”

“Franklin is not mentally ill. He’s insane. At times. And it’s temporary,” Murray told jurors. He closed by saying, “My client really is ‘Not Guilty’, but at worst, he’s ‘Not Guilty by Reason of Insanity.’”