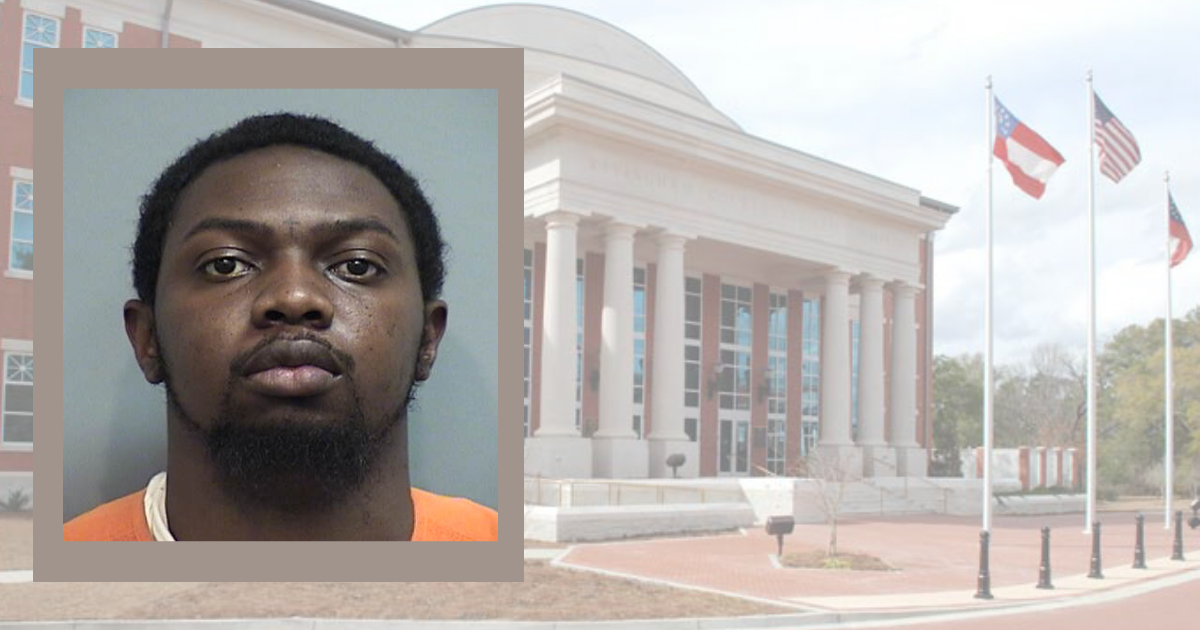 Franklin Hope Johnson is on trial this week in Superior Court for stabbing an Effingham County Sheriff’s deputy in 2016.

It’s a unique case in that whether or not Franklin Hope Johnson stabbed ECSO Sergeant Danny Harrington in the head, shoulders, and back six years ago has never been disputed. If he was in a sound state of mind when he did it is what jurors will decide.

In March 2016, Franklin Johnson’s grandparents sought a 1013 involuntary apprehension for mental incompetency due to drug dependency. On March 17, ECSO Deputy Adam Harmon attempted to serve the 1013 sought by Johnson’s grandmother, but was unable to do so because Johnson could not be located. Family once again contacted law enforcement the next day, prompting Sgt. Harrington and three other deputies attempted to serve the order. According to testimony, moments after ringing the doorbell, Johnson exited the home and began stabbing Sgt. Harrington – first in the head, then the shoulders and back. A struggle ensued, Johnson fought for control of the gun of one deputy before the deputy fired it once, all while Sgt. Harrington used the weight of his body to restrict Johnson’s movement as much as possible. Ultimately, it took multiple deputies, several sets of handcuffs, and two deployments of a Taser to subdue Johnson.

Harrington was life-flighted to Memorial Hospital in Savannah and Johnson was transported to Effingham Hospital where he was interviewed by Special Agent Tracy Sands of the Georgia Bureau of Investigation. During that interview, Johnson told Agent Sands multiple times that he used Spice that day. Four days later, GBI Agent Chuck Sullenger sought warrants for Johnson for two counts of Aggravated Assault on a Peace Officer.

In April 2016, defense counsel made multiple attempts to transfer Johnson to a recovery center and then a treatment center, but then-superior court Judge William Woodrum denied those requests. According to court documents, Johnson has a history of bipolar disorder and schizophrenia and during a hearing on the transfers, Johnson testified that he had no recollection of the event because he “blacked out.”

Defense counsel requested a psychological evaluation from the court on the basis that Johnson would not be able to “effectively assist with his defense because he cannot remember anything regarding the events leading up to, and surrounding his arrest on March 18, 2016.” An attached medical report from the hospital suggested Johnson took ‘Spice’ which caused the memory loss.

In May 2017, the state filed motions to have an independent evaluation conducted with regard to the ‘degree of criminal responsibility or sanity at the time of the act.’ Ten months later, in March 2018, with new defense counsel, Johnson entered a change of plea to ‘Not Guilty by Reason of Insanity’ at the time of the act.

Five years after his arrest,  defense counsel made a renewed motion for bond due to the deteriorating medical status of Johnson due to his Crohn’s disease. Judge Lovett Bennett Jr., set a $100,000 bond for Johnson with an ankle monitor, a 7:00 p.m. curfew, and an order to remain at his father’s home.

Following a series of trial schedules, delays, and the appointment of a new judge, the case was placed on the trial calendar for May 25, 2022.

The courtroom Wednesday had several full pews with people on both sides. On at least two occasions, Johnson’s family was asked to quiet down due to their remarks and responses during testimony from the state’s witnesses.

The state framed its argument around a series of statements made to police by Johnson and a 1013 form from Effingham County Probate Court which listed the reason for the 1013 involuntary commitment by Johnson’s family as ‘drug dependency. Assistant District Attorney Matt Breedon presented seven witnesses Wednesday as jurors heard testimony from a family member of Johnson, four ECSO deputies, a GBI agent, and Sgt. Danny Harrington himself.

Emotional colleagues of Harrington testified about their recollection of the date six years ago, establishing timelines for the incident that began almost immediately upon arrival. One deputy testified that he watched Harrington knock on the door and in a matter of seconds, it swung open for Johnson to exit and violently attack Harrington. When asked why he fired his duty weapon, he said, “He was killing my Sergeant.”

Sgt. Harrington took the stand to describe how quickly the incident escalated. He said he wanted to take as many people as he could because Johnson’s family told ECSO he wouldn’t go willingly. When asked if the situation was handled as the office traditionally handles 1013s, Harrington said, “Yes. We don’t go kicking in doors and windows. We’re trying to help these people.”

He went on to describe the front door opening at “horror movie speed” and an instant pain in his head that initially left him believing he’d been shot. Harrington described the scuffle, Johnson’s attempt to take his gun and that of another deputy while screaming and growling, and the strength and force with which Johnson fought back for an extended period of time.

Breedon then walked Harrington through the 2016 incident, displaying a number of photos depicting injuries from Harrington’s nine stab wounds. He described his loss of hearing and the residual issues from severed nerves, including 28% mobility loss in his right arm. He suffers daily from nerve pain and he cannot ‘retract’ his right arm. When asked how the incident impacted his ability to do his job, Harrington said it “ruined his career technically,” referencing a letter from a doctor which states he cannot complete his duties or defend himself and should be on ‘light duty’ permanently.

Jurors also heard from the grandfather of Johnson who spoke with law enforcement the day of the incident and the days that followed. He told a GBI agent in a recorded interview that he believed the issue was “more drug-related than anything” though he testified Wednesday that he was unaware of any drug use by his grandson.

GBI Agent Tracy Sands took the stand to discuss the interview conducted with Johnson at the hospital after the incident. Sands testified that Johnson appeared to be coherent, of a sound state of mind, and was able to answer the questions asked of him, including personal details about himself beyond the standard form of questioning. He stated Johnson understood the questions and did not appear confused by the answers.

Sands also said he asked Johnson if he had used any illegal substances that day, to which he replied he’d used marijuana with ‘spice. Jurors then heard the full 25-minute recorded interview with Johnson, during which Johnson stated he pulled his weapon on Harrington first.

Much of the defense interaction with state witnesses was marred by a contentious dialogue that led to repeated objections most of the day.

Johnson’s lead attorney, Lloyd Murray, called the state’s case a ‘dump truck’ approach, referencing the twelve felony counts. He implored jurors to focus on whether or not the acts were ‘intentional,’ ‘deliberate,’ and ‘malicious.’ He contended that his client is insane and holds no criminal responsibility for the violent attack on Sgt. Harrington six years ago.

Across witnesses, Murray made every effort to suggest that the Sheriff’s Office handled the 1013 situation poorly. On multiple occasions, Murray alluded to the fact that a better training of deputies would have yielded a different outcome in the three-to-four second period from when Johnson opened the door and when he stabbed Harrington the first time.

What jurors did not consider Wednesday was any testimony or evidence on previous attempts by defense counsel to have Johnson enrolled in drug treatment programs initially following the arrest. Prosecutors did reference a Coastal Harbor Report which quoted Johnson’s statement to medical personnel in which he described ‘a psychotic episode’ brought on by marijuana laced with Spice.

Just before 4:30 p.m., the court received a note from a juror about the tattoos on the arms and chest of Franklin Johnson. Specifically, the juror wanted to know if the tattoos were anti-police in nature and, if so, when the tattoos were obtained. Judge Bennett said the response to the juror would be delivered Thursday.

The trial is set to resume Thursday morning in Effingham County Superior Court.