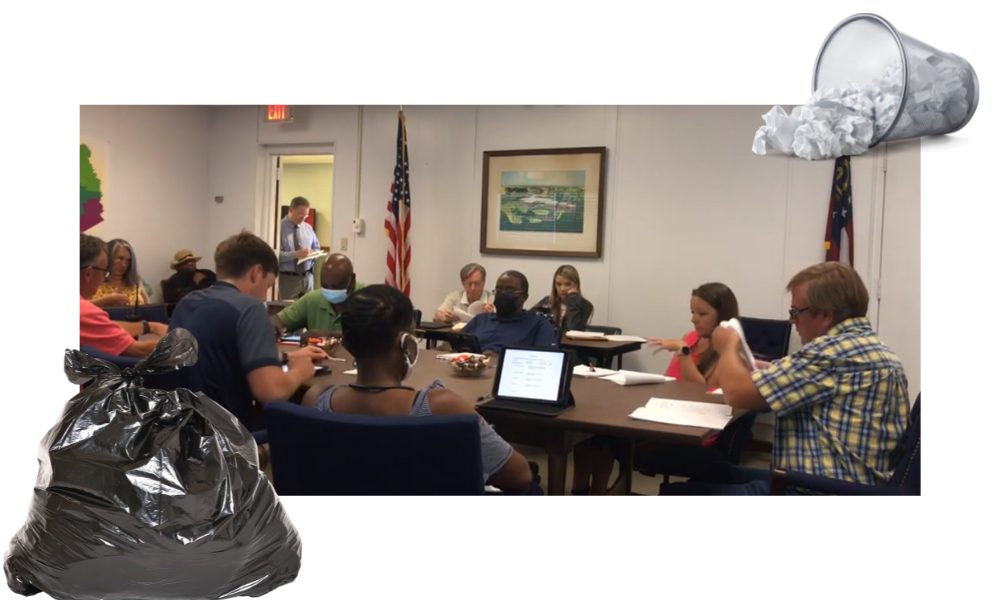 How the county can best manage its solid waste collections and transport was once again a point of contention for a divided Board of Commissioners in Screven County.

Under consideration at Tuesday’s commission meeting was an amendment to the AllGreen agreement for solid waste services as it pertains to county collection and hauling. The amendment was not an addendum to the contract, but a replacement contract of sorts with additional services offered by AllGreen. The issue has been discussed at the last three meetings and drew commissioners out for a workshop with the public in June as well.

When Chairman Will Boyd moved to the agenda item Tuesday, Commissioner Rosa Romeo moved immediately to approve the amendment, with a second by Commissioner John Triplett. When Boyd asked if there was any discussion on the matter, Commissioner Allison Willis said she reviewed the contract and had issues that she wanted to put in writing to ensure they were formally part of the meeting minutes.

Willis read a prepared list of objections that coincided paragraph-by-paragraph to the proposed contract with AllGreen which included that:

Willis also took issue with the contracts lacking stipulations regarding:

“What I mean is this transfer station is directly attached to an undeveloped piece of land that was once under consideration for a local landfill by the county for the county. So, you are granting access to an individual that this county just fought on a landfill, granting them access to a piece of property that has already been approved by the EPD for a landfill,” Willis said.

“I respectfully will vote NO on the Amendment as the stipulations not in the contract are incomplete, inaccurate, and they’re inconsistent with the oath of office I took when I was sworn in. Furthermore, if it’s not the Board’s intent, if it’s not the Board’s intent, to set AllGreen Services and Atlantic Waste Services up for access to a landfill, I implore each commissioner to hold off on voting on this Amendment, let’s make revision and additions, and to hold an open discussion with the citizens of this county before moving forward on it,” she closed.

Commissioner Mike Dixon said Willis raised several good questions. “We’ve voted on resolutions and code amendments and in my opinion we really haven’t discussed them as a Board in a workshop. I think we’re moving too fast and we’re not giving this complete thought as we should.”

When Willis concluded, Commissioner Edwin Lovett said she had gone ‘far outside the scope of the agreement,’ which Boyd echoed.

Dixon said the discussion points brought up by Willis were the ‘beginning of the beginning,’ to which Lovett said the points were ones that cannot be assumed will occur and don’t need to be addressed. Lovett said the contract didn’t need any additions or subtractions because the things mentioned were outside the scope of the agreement. As to the billing issues, he said they had some historically but the county is “gettin’ it under control.”

Commissioner JC Warren said the county “can’t control after hours and all that” but Willis pushed back, saying it’s the county’s transfer station and they’re responsible for it.

Boyd said the Amendment was an opportunity to make the sanitation department more efficient. “I don’t see where, I realize what you’re saying possibly could happen, but it’s pretty far-fetched. Especially the landfill part. That’s way out there. Like, I don’t think that’s possible, much less probable.”

Willis also said there has been a billing issue with the tipping fees and no safeguards in place to make sure it doesn’t happen again, especially when the county has to pay for outgoing trash. She said the county should have been billing more, collecting more, and billing more frequently.

Commissioner Triplett took issue with Willis’ claims, saying they were incorrect and the matter should be taken to a vote. When Willis asked her what was incorrect, Triplett cited “inflation, that collections were up five-fold, there was a one mill savings to date which helped the county avoid a tax increase, an increase in the cost of diesel fuel, health insurance rates increasing 50% over two years, the monetary value in avoiding risks of accidents and lawsuits, and the fact that no one was out of a job.” Triplett said AllGreen and AWS offered jobs to county sanitation workers, as did the prison.

“The savings was substantial,” Triplett said.

Ultimately, Chairman Boyd called for a vote and the amendment was approved 4-2 with Commissioners Allison Willis and Mike Dixon opposing.

You can watch the clip of Willis reading her statement below followed by the discussion by other commissioners.