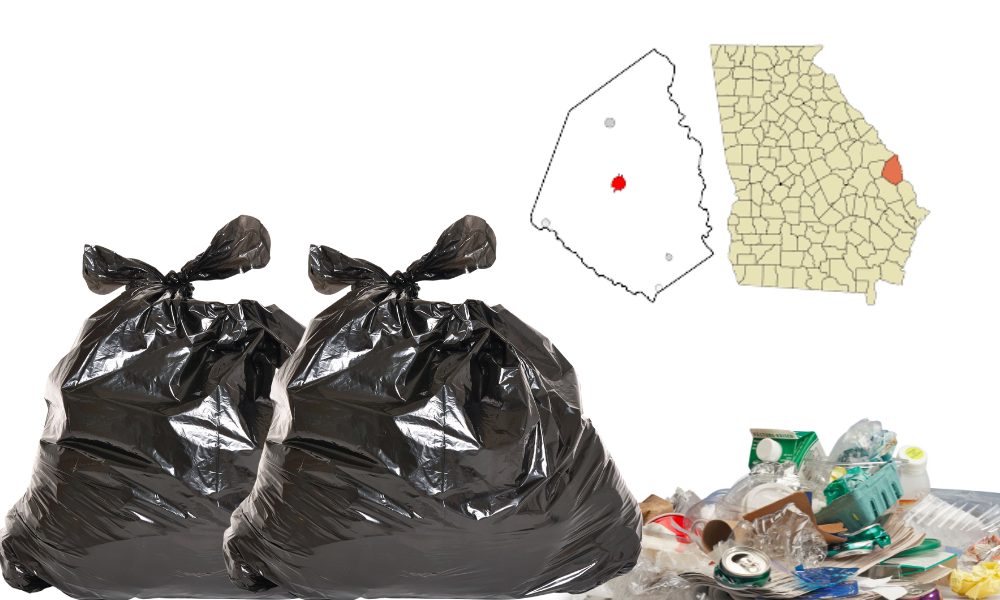 The Screven County Board of Commissioners convened for a workshop on Solid Waste Management Thursday night to inform the public on the status of sanitation service operations, but the discussion was all but free of contention as commissioners fielded questions from the public.

In attendance were a handful of business owners interested in contracting with the county, eight residents, and Sam Sullivan of AllGreen Services, which currently handles the county’s collection and disposal contracts for sanitation. (AllGreen was recently acquired by Atlantic Waste Services, which has been a cause of concern for some residents who opposed the landfill proposed by Atlantic Waste in 2019)

Chairman Will Boyd asked County Attorney Hubert Reeves to give an overview of the contracts by which the county is currently bound. Reeves said there are two contracts in place with AllGreen Services:

County Commissioner Allison Willis took Reeves to task on his interpretation of the contracts and how those contracts came to be. “So it’s your legal opinion that this contract, that we are locked in until 2024 despite the term ‘annually renewable in each annual year?”

“I am,” Reeves told her. He said any deviation from the terms of the contract would subject the county to a lawsuit.

To Bid or Not to Bid

It was contradictory to what Willis says she was told about a recent hospital agreement the county entered into for indigent care support. “When we discussed the hospital contract, it was Mr. Reeves’ advice and opinion that we could not enter into a multi-year lease agreement pursuant to [OCGA] 36-30-13 code. It was in a letter he wrote to us about that. I find it problematic that he was adamant about that with the hospital, but the same board has entered into a multi year contract with the collections. The term he used in his letter with the hospital was ‘binding one board to a contract.”’

Willis also cited a 1949 Screven County ordinance that requires the county to bid out any service or purchase that exceeds $500 unless it is determined to be impractical to do so and such impracticality is subsequently voted on by the Board. Reeves said the commissioners had updated the ordinance since then and that he recently found where he drafted it to increase the amount to $5,000, but he did not have a signed copy of the ordinance as approved. No one in the county office has been able to locate a copy of that ordinance but Reeves said he is hopeful they will soon.

Commissioner J.C. Warren, citing a state law on bidding and procurement said the county has no obligation to bid out solid waste services, which Reeves affirmed, but Willis said the 1949 Screven County ordinance prevails for how the Commission should operate.

Willis said she reviewed the meeting minutes over the last two years and found no indication that the Board voted not to bid the solid waste collection contract before it entered into the contract.

Willis asked if there was a formal vote to which Reeves stated that the formal vote was to adopt the contract ‘as is.’

Sam Sullivan was given an opportunity to explain what services AllGreen currently offers the county and the proposal he’s made to the county, including the purchase of a loader, his employees loading the trash to increase efficiency of loads hauled, and an increase in revenue for trash if Jenkins County can transfer it’s 4,800 tons of MSW trash to the Screven County transfer station each year.

“The contract in place, it has an annual provision for me to raise the price. And I’ve never done that. Every year  I can come back to you, it has an automatic Consumer Price Index price increase. I’ve never done that. So from an annual perspective, if I came back to you and said, ‘I need to raise the price,’ you could say ‘No, we’re not going to do that,’ then I can’t go forward but I’ve never carried that out. I want to do good by y’all and right by y’all. I think y’all got a terrific collection program and we’ve offered something that you should jump all over with both feet like a dog on a bone. It’s an attractive offer,” he said.

Sullivan told Commissioners that AllGreen does more than contract with the county, too. “We hired seven employees from here. We buy fuel here, we buy tires here, not all of our tires, but a lot of them. We try to do business where we do business.”

Willis said it isn’t worth taking on the wear and tear on county equipment for Jenkins County trash for a small increase in revenue.

The issue, however, is that the transfer station in Screven County as it operates right now is not doing so efficiently. Sullivan said a recent loader failure on the part of the county left trash 100 yards outside of the building, which is illegal. “Y’all not only couldn’t load us, you had to stop us from bringing trash to the transfer station so we took it all the way to our transfer station, at our cost, all the way at I-16 and Hwy 301.”

“Why are we…we’re supposed to be helping our people. Not him and his business. So the fact of the matter is, let’s go all the way back to the beginning. We used to have 70 (collection) sites at $50 a year. We’ve got 20 sites at $100 a year now,” Willis asked.

Chairman Boyd said the overhaul to solid waste in general back in 2018 was a result of a change to the Service Delivery Strategy Agreement that came as a result of a lawsuit by the City of Sylvania against the county. Under the agreement, the county could no longer subsidize the trash fund or the city’s trash services with general fund dollars and instead had to raise rates to fully fund the sanitation budget on its own.

The county’s increase in fee per resident does not mean the county is spending more on services because the county is not using general fund dollars at all. Since 2017, the budget expenditures on solid waste have gone from over $1 million annually to approximately $830,000.

Commissioner John Triplett said the county has increased its revenue stream from sanitation considerably since the contract was executed with AllGreen because the county is making money on every ton of trash that moves across the scales at the transfer station. That further reduces the output for the county. He said between the cost reduction and the spike in revenue, it’s at least $200,000.

Sullivan reiterated that his offer for the county was a generous one, especially with the current labor shortages and the spike on costs for equipment that is exacerbated by long manufacturing times. “I hear this gentleman over here saying I’m full of sh*t, it’s the truth. I think you’ve got a good system, your sites are clean” he said.

Opportunity to Bid in the Future?

One of Willis’ main points of contention stems from the lack of opportunity for local contractors to submit a bid for the services. She also expressed her frustration with the lack of advertisement that the county was even considering outsourcing something. She said it should be in the newspaper and on state procurement websites.

Business owner Tre Evans asked several times whether or not he would be allowed to bid when the contracts come close to expiration. “We should keep our tax money in this county. That’s a million dollars. A lot of contracts in this county go out of this county and the money doesn’t go to our local banks. The fact that local businessmen are not even allowed the ability to participate in the bidding process to keep it fair…I mean, when you have a monopoly, that means there’s no incentive to provide a good service.”

Evans has experience with short-term contracts with FEMA, particularly after disasters. He said he’s worked after storms and fires when the end goal is to clean up hundreds of thousands of cubic yards of debris scattered across a hundred miles. “I’m absolutely, 100% experienced at picking trash up as fast and as efficiently as possible. 20 sites that never move? That’s a cake walk.”

Business owner Tyler Oglesby told Commissioners he wants the opportunity to bid as well, but wants everyone to be on the same page. “All I’m asking is for notice in 2024, before this comes up, so I have the chance to give it a shot.”

Resident Tommy O’Barr said he would like to see hard figures on all three parts of the process – collections, hauling, and tipping fees. “We also need to look into seeing if the county can get back into the business of collection. And where you can bid it, it needs to be bid. Period.”

Boyd said when they sought out services for trash collection, no one in the county was in the trash business that commissioners were aware of. The hauling component of the trash did not come about until later. When they sought a contract, the only companies that expressed interest were AllGreen and Atlantic Waste.

“I promise you, if we would have talked to Ben Wall, the roof would have blown off the thing at the time because everybody…a lot of this stuff here now is that they don’t want Ben Wall to be involved in the transfer station. And that’s dirty. That’s just low down,” Boyd said of the 2019 discussions.

Evans replied that it was dirty that local people cannot be involved.

“But there was no effort to keep people from participating,” Boyd said.

Triplett told members of the community that the county was not sure of what services it needed when they officially began outsourcing trash services. As issues arose or needs became evident, they worked with AllGreen to adapt. He says now that they have a better handle on what services need to be outsourced, he believes it’s in the best interest of the county to have a single contractor handling every step of the process.

After an hour and seventeen minutes of discussion, Commissioner Rosa Romeo said “We need to go to church” and the meeting was adjourned.

*Commissioner Mike Dixon was not present for the workshop.