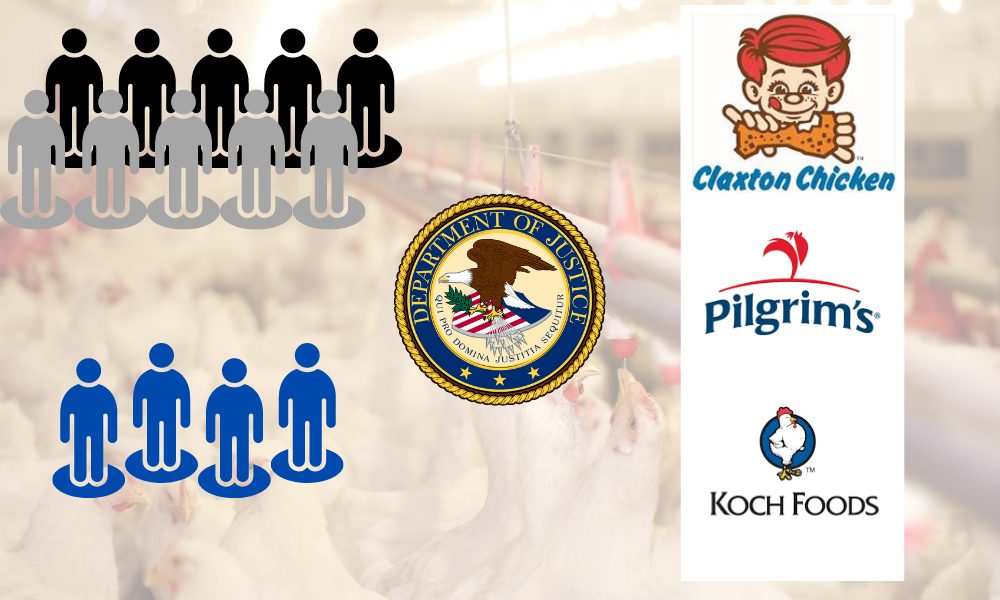 Four more individuals and another company have been indicted in an ongoing investigation into the powers that control poultry products in the United States.

A federal grand jury in Denver, Colorado, returned an indictment last week charging Koch Foods, headquartered in Park Ridge, Illinois, for participating in a nationwide conspiracy to fix prices and rig bids for broiler chicken products. Separately, a federal grand jury in Denver returned an indictment charging four executives for their roles in the same conspiracy.

According to court documents, the four charged former Pilgrim’s Pride executives include:

The indictments allege that the defendants and co-conspirators conspired to suppress and eliminate competition for sales of broiler chicken products, which are chickens raised for human consumption and sold to grocers and restaurants.

Koch’s senior vice president, William Kantola, is among ten individuals indicted in October 2020 for their roles in the conspiracy. On May 19, a grand jury returned an indictment against Claxton Poultry for its role in the same conspiracy, which last week’s indictment supersedes. Pilgrim’s Pride, a major broiler chicken producer based in Greeley, Colorado, pleaded guilty and was sentenced in February 2021 to pay a criminal fine of $107 million for its role in the conspiracy. The long-running conspiracy began as early as 2012 and lasted until at least 2019.

You can read the superseding indictment, which includes Claxton Poultry, here. The indictment against the 4 new individuals is here.

“As today’s charges show, the division remains committed to holding both individuals and companies accountable when they choose profits over following the law,” said Acting Assistant Attorney General Richard A. Powers of the Justice Department’s Antitrust Division. “Our investigation into criminal price fixing of broiler chickens continues, and we will not stop until we ensure that wrongdoers are held accountable and competition is restored to this critical industry.”

“Price fixing is not a victimless crime, and the illegal actions taken by these companies and individuals in the broiler chicken industry have had a direct and negative impact on the American consumer,” said Assistant Director in Charge Steven M. D’Antuono of the FBI Washington Field Office.

The Sherman Act carries a statutory maximum penalty of 10 years in prison and a $1 million fine for individuals, and a $100 million fine for corporations. The maximum fine may be increased to twice the gain derived from the crime or twice the loss suffered by victims, if either of those amounts is greater than the statutory maximum fine. A federal district court judge will determine any sentence after considering the U.S. Sentencing Guidelines and other statutory factors.

This case is the result of an ongoing federal antitrust investigation into price fixing, bid rigging, and other anticompetitive conduct in the broiler chicken industry, which is being conducted by the Antitrust Division with the assistance of the Department of Commerce Inspector General’s Office, the FBI’s Washington Field Office and the U.S. Department of Agriculture Inspector General’s Office. The case is being prosecuted by the Antitrust Division.

Anyone with information on price fixing, bid rigging, or other anticompetitive conduct related to the broiler chicken industry should contact the Antitrust Division’s Citizen Complaint Center at 1-888-647-3258.