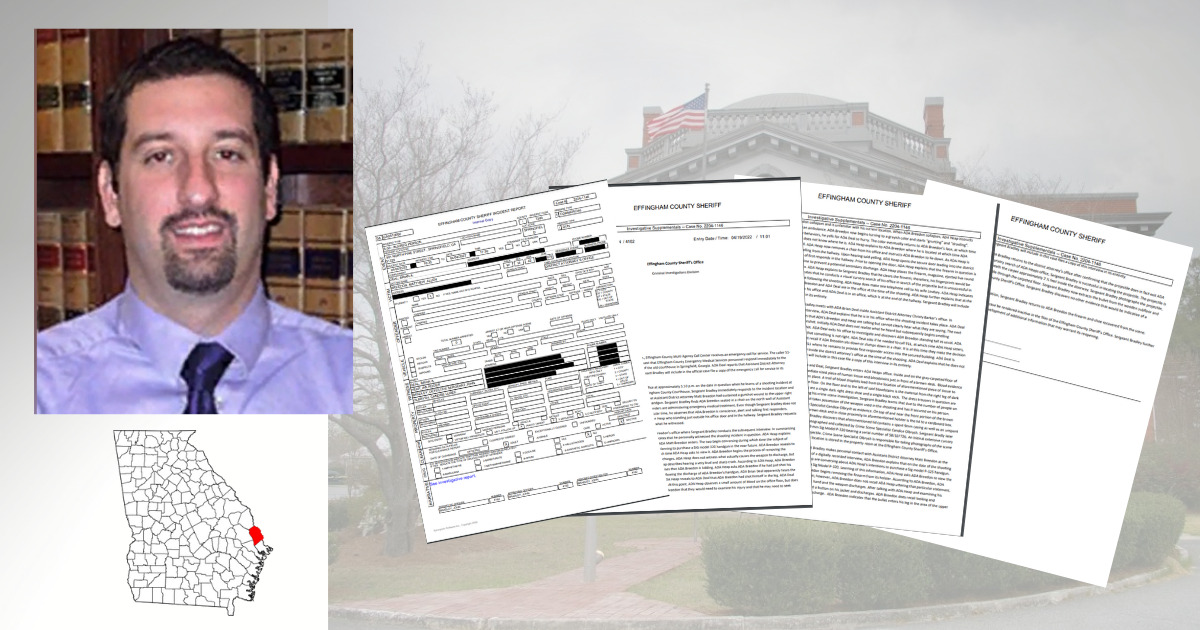 An Assistant District Attorney who ‘accidentally’ shot himself in the leg at the old Effingham County Courthouse will not face charges for the incident.

According to the investigative report by Sgt. John Bradley, ADA Brian Deal called 911 just after 5:00 p.m. on April 4. He requested EMS and stated Breedon ‘accidentally’ shot himself in the upper right leg.

Bradley wrote that he arrived to find a ‘conscious, alert, and talking’ Breedon in a chair in ADA Ian Heap’s office under the care of first responders. Bradley interviewed Heap and summarized Heap’s account of what happened. Breedon was reportedly showing Heap his SIG model 320 handgun. As he removed the firearm from its holster, the gun was fired. In Sgt. Bradley’s report, he refers to the shooting as an ‘unintentional discharge.’

‘Heap describes hearing a very loud and sharp crack….Breedon does not react immediately to the firearm discharging…ADA Deal apparently hears the gunshot, runs into ADA Heap’s office, and asks what happened….Deal asks if he should call 911 at which time ADA Breedon utters ‘No.’

Bradley also interviewed ADA Brian Deal who said he heard the gunshot and then smelled gunpowder. He reported that when he asked if he needed to call 911, Heap replied, “Give him a minute.” Deal did call 911, however, and waited downstairs to open the door for first responders.

Two days after the incident, Bradley spoke with Breedon about the day in question. From that summary:

“According to ADA Breedon, ADA Heap claims to have told him there is no need to clear the weapon; however, ADA Breedon does not recall ADA Heap uttering that particular statement….After talking with ADA Heap and examining his jacket, ADA Breedon surmises that the weapons [sic] trigger caught a button on his jacket and discharges. ADA Breedon does recall looking and observing that his finger is on the weapon’s frame following the discharge.”

The report does not indicate on which date the case was rendered inactive or when Breedon’s weapon was returned to him, but no further action is expected. Breedon has also returned to work.