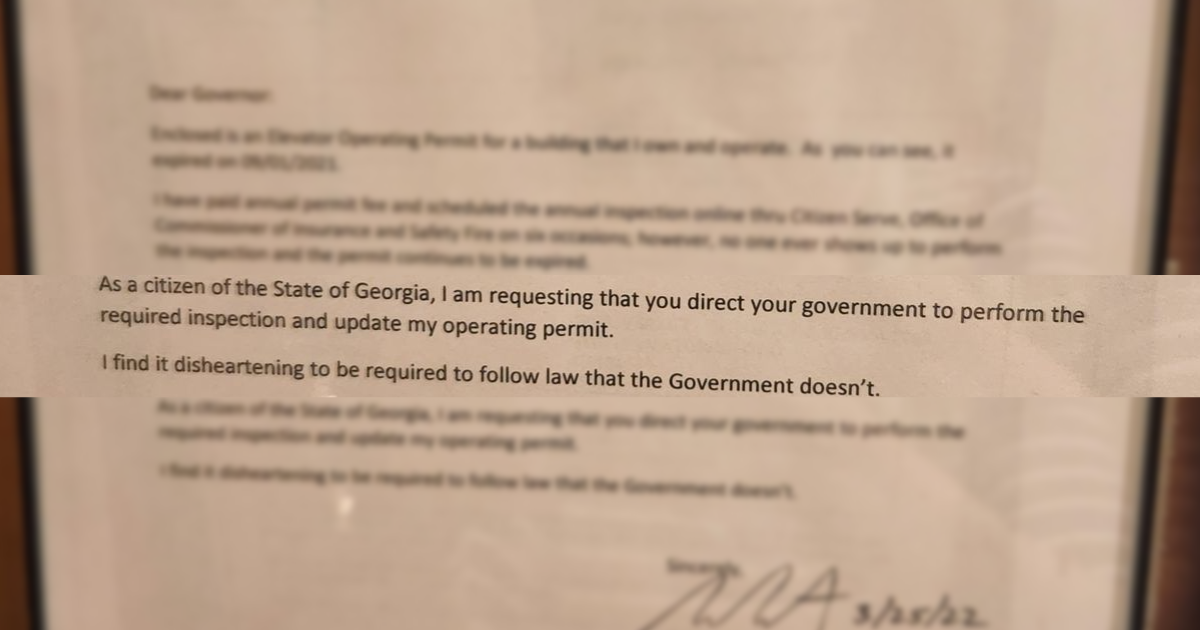 One Effingham County business park recently blasted government double standards and bureaucracy in a less-than-usual, but quite obvious manner.

Stephen H. Schwartz, the registered agent of Goshen Park Commercial Center in Rincon, recently penned a letter to the state over requirements imposed on citizens, property owners and businesses in the name of ‘safety’ while the government fails to uphold its side of the equation for safety.

For Schwartz, the Elevator Operating Permit for the commercial park has been expired for months, leaving him in a state of non-compliance under the law. Despite his many attempts to remedy the expiration, Schwartz says the state has failed to act on the same laws to which it forces others to adhere.

Schwartz fired at the state over its failure to inspect an elevator in the building, prompting Schwartz to have to repeatedly resubmit fees and applications. The letter dated March 25, 2022 says the Elevator Operating Permit expired on September 1, 2021.  As of April 28, 2022, the letter was still displayed.

According to the fee schedule under Georgia law, an annual operating permit fee is $65 while a temporary fee is $100. Additional fees for inspections are also included based on size and space.

“I have paid annual permit fee and scheduled the annual inspection online thru Citizen Serve, Office of Commissioner of Insurance Safety and Fire on six occasions; however, no one ever shows up to perform inspection and permit continues to be expired,” the letter reads.

The letter from Schwartz also appears in the frame inside the elevator, which would otherwise display the elevator permit.

Under Georgia law, each elevator – used or proposed to be used in Georgia – must be “thoroughly inspected regularly,” according to Georgia’s Office of Commission of Insurance Safety Fire, which is responsible for the inspections and certifications.

“A primary purpose of these rules and regulations is to establish the state minimum safety codes and standards for the prevention of loss of life, injury and structural damage in all buildings, structures and other locations governed by state regulations,” the state law reads.

In this article:City of Rincon, Effingham County