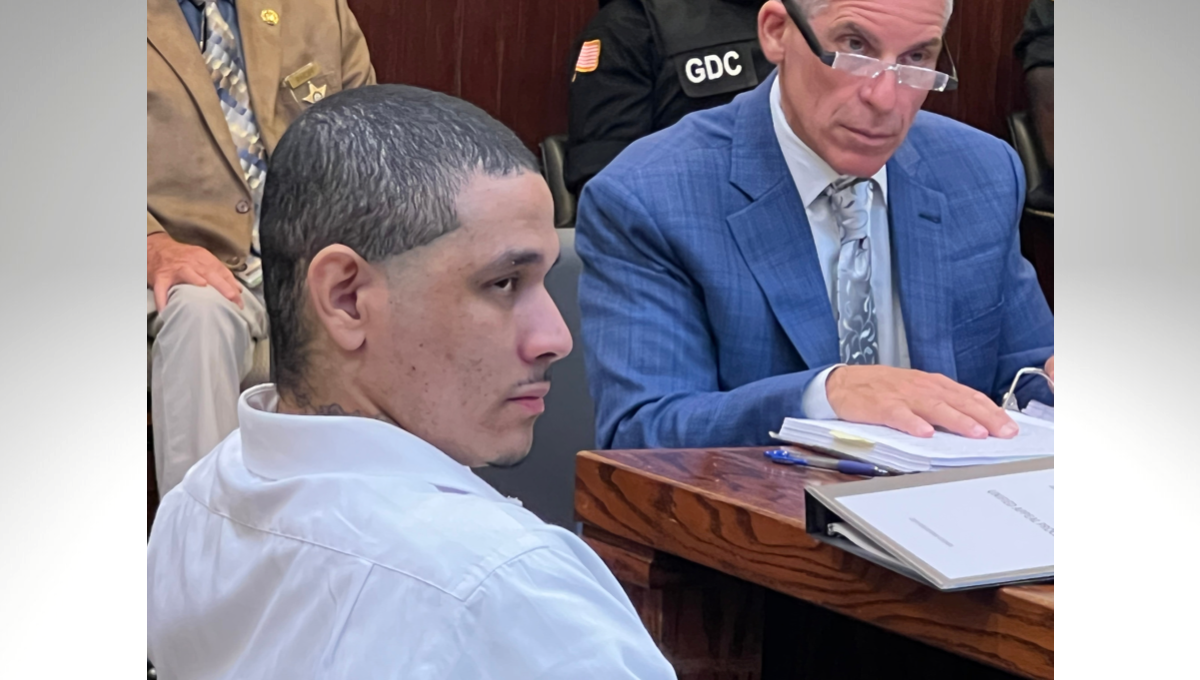 A man charged with murder in Tattnall County announced Tuesday that he is switching legal counsel. The announcement came during a court appearance during which Weekes was officially notified that the state intended to seek the death penalty in his case.

Nathan Weekes appeared in Tattnall County Superior Court Tuesday afternoon for his first post-indictment appearance. He faces a number of charges, including the murder of Glennville native Bobby Kicklighter. Tuesday also marked the first time Weekes appeared in person instead of by video conference from a GDC facility.

The Tattnall County Courthouse Annex was crawling with enhanced security. The Georgia Department of Corrections (GDC) transported Weekes from the Special Management Unit at Georgia Diagnostic & Classification Prison in Jackson. Eight GDC CID agents and administrators appeared in the courtroom in addition to the regular staffing by the Tattnall County Sheriff’s Office. Officers with the Interdiction Response Unit, who are heavily equipped, accompanied Weekes while additional officers were posted outside the courtroom and building doors.

Weekes, a.k.a “Kash” and known in the criminal indictment against him as “Da President” of the Saint Laurent Squad, is alleged to be the ringleader of a multimillion dollar contraband ring operating from within the walls of Smith State Prison in Glennville. That criminal enterprise, according to court documents, assisted with the transport of cell phones, illegal drugs, gold and diamond jewelry, designer clothes, cash, and other prohibited items into Smith SP. In carrying out the operations of this enterprise, the indictment alleges that Weekes and his codefendants plotted a hit on a corrections officer responsible for the interception of contraband. During the execution of the hit, however, they ‘hit’ the wrong house, resulting in the murder of 88-year-old Bobby Kicklighter.

Allegations in the indictment and other court documents suggest that Smith State Prison served as a hub for a criminal enterprise responsible for a number of other offenses.

The Department of Corrections moved Weekes to Smith SP in 2019. Weekes is serving a sentenced for ten counts of Armed Robbery he committed at the age of 14.

Tuesday’s hearing before Judge Jay Stewart stalled for well over thirty minutes as defense attorneys sorted out the logistics of their representation.

Weekes, who appeared in plain civilian clothes and donning a watch and ring, smiled and made small talk with attorneys while awaiting for proceedings to commence.

Special Prosecutor Sheila Ross spoke on behalf of the State, alongside ADA Joe Skeens of the Atlantic Judicial Circuit District Attorney’s Office. As she did with Sumlin earlier in the day, Ross personally presented Weekes with a Notice of the State’s Intention to Seek the Death Penalty.

Defense attorney Jim Berry announced that he was present on behalf of Weekes, to which Judge Jay Stewart asked whether or not he was lead counsel. Berry replied that he was ‘not sure at the moment.’  He explained that he traveled from Cobb County to meet with Weekes about possible legal representation, but that Tuesday marked his first time meeting Weekes and a decision about how to proceed had not yet been made. Berry also said that longtime criminal defense attorney Gerald Word was present and may be joining the legal defense team. Word, he said, had a possible technical conflict that the court needed to hear outside of the presence of the state and the public.

“It shouldn’t be that hard to determine who is lead counsel and who is co-counsel,” Judge Stewart told the attorneys. In the interest of security, Sheriff Kyle Sapp cleared the courtroom of prosecutors, witnesses, and the public so that Weekes could remain present for the on-the-record proceedings.

After a brief hearing, court resumed and Berry and Word announced that both would be participating in the First Proceedings. Weekes’ attorney of record, Brian Steel, sat third chair.

The Court then provided both parties with master juror lists accompanied by a protective order filed by the State to keep the lists under seal. The protective order bars attorneys from sharing the data with Weekes, or any other party. Defense counsel asked for an amendment to the order to share the data with any forthcoming experts, to which the state agreed.

After handling the remaining procedural matters, defense attorney Brian Steel asked for an opportunity to address the court. He stated that upon learning of the state’s intent to seek the death penalty, he felt it was in Weekes’ best interest if he withdrew from the case due to his own upcoming trial schedule in other cases. He stated that he would be refunding all of the money paid to his office thus far and, with the permission of Weekes, would direct the money to the office of Mr. Berry.

Stewart asked the standard questions regarding Berry and Word’s qualifications to serve as defense attorneys in a capital murder case for the death penalty.

Word has been an active member in good standing of the State Bar of Georgia for 40 years. He’s seen 13 death penalty cases to verdict.  Similarly, Berry has practiced law for 52 years and has a tried a handful of murder cases, including capital cases.

Stewart asked Weekes if his legal representation was satisfactory thus far, to which he answered affirmatively. Weekes, along with his codefendants Aerial Murphy, Christopher Sumlin, and Keisha Jones, will appear in court in November for their arraignment proceedings.