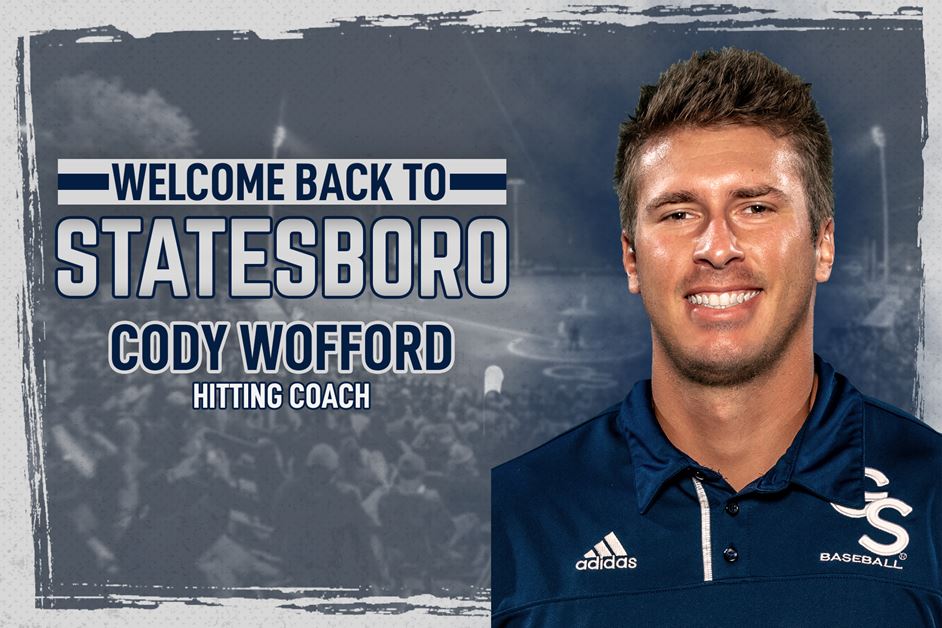 “I am excited to welcome Cody Wofford back to Georgia Southern to serve as our Hitting Coach,” Coach Hennon said. “Cody is a talented, versatile young coach whose positive energy is infectious and he will once again make an impact on our program. Cody’s hard work during his previous stint as our Volunteer Coach was instrumental in the development of many of our players that are still present in our program. His efforts as a coach and recruiter have helped in the resurgence of the Eastern Kentucky program these past two years. Along with coaching the hitters, Cody will work alongside Coach Battisto in our recruiting efforts and also coordinate our infield defense. Coach Wofford is a natural fit with the program and he will work tirelessly as we constantly seek to improve and reach the ultimate goal of Omaha.”

Wofford is a familiar name to Statesboro, as he served as a volunteer assistant coach for the Eagles in 2019 and 2020. In 2019, he helped the Eagles post a 35-24 record and help the team claim its first ever Sun Belt East Division title. In 2020, the Eagles posted an 11-5 record, including finishing a sweep over #3 UGA before the season was cut short.

During his time at Eastern Kentucky, Wofford was responsible for coaching the infielders, team defense, and hitting. Wofford saw the Colonels post back-to-back program-highs in fielding percentage, posting a .972 fielding percentage in 2021 and a .975 in 2022. EKU posted a 38-20 record in 2022, which was the most wins the program has earned since 1990.

Prior to his first stint at Georgia Southern, Wofford was a student assistant at South Alabama, where he helped with the infielders, hitting, and coached first base. South Alabama posted two top-25 fielding percentage seasons under Wofford’s guidance. The Jaguars won the Sun Belt Tournament Championship in 2017.

Wofford played collegiate baseball at Darton College from 2011-2013 before transferring to Western Kentucky prior to the 2014 season and finishing his playing career there in 2015. Wofford was the starting shortstop both seasons he was with the Hilltoppers, posting 14 home runs in his two seasons. Wofford led off and scored a run in a 3-2 win over #4 Vanderbilt in 2014.