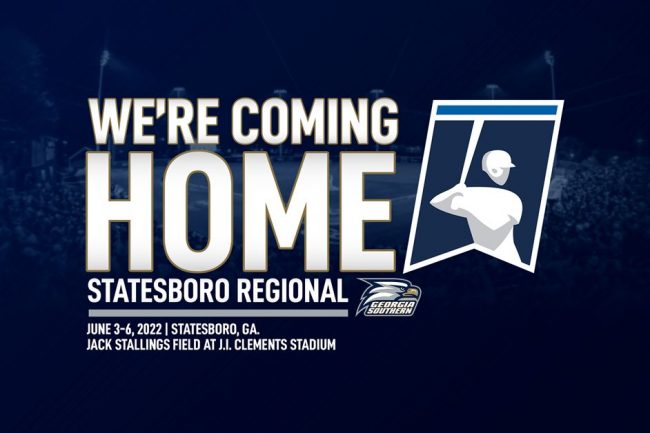 Competition for the Statesboro Regional will get underway on Friday, June 3 with a pair of games. The other three teams who will make up the bracket will be announced Monday at noon on ESPN2 as part of the release of the entire 2022 NCAA Baseball Championship field. Game times will be announced shortly thereafter.

Tickets for the Statesboro Regional will be available for purchase online at GSEagles.com/Tickets beginning at 1 p.m. (ET) on Monday, May 30. Season ticket holders and donors who already completed their pre-order will have their orders processed later tonight.

All-regional ticket passes will range from $60-$90 depending on seat locations. For all ticket pricing and parking information, please CLICK HERE (PDF).

Single-game tickets will go on sale Thursday at noon, if available. Tickets can be purchased online at GSEagles.com/Tickets or over the phone by calling (800) GSU-WINS during normal business hours from Tuesday through Friday from 8:30 a.m.-5 p.m. The Athletics Ticket Office is closed on Monday, May 30 in observance of Memorial Day.

For Georgia Southern (40-18), the selection marks the Eagles’ 14th overall appearance in NCAA postseason play and the first since 2014.

Each regional field features four teams, playing a double-elimination format. All 16 regionals are scheduled to be conducted from Friday, June 3 to Monday, June 6. Start times for each game will be determined once television broadcast selections have been finalized.

Thirty (30) Division I conferences receive an automatic berth in the field of 64, along with 34 at-large selections. The College World Series (CWS) begins play Friday, June 17 at TD Ameritrade Park in Omaha, Nebraska.