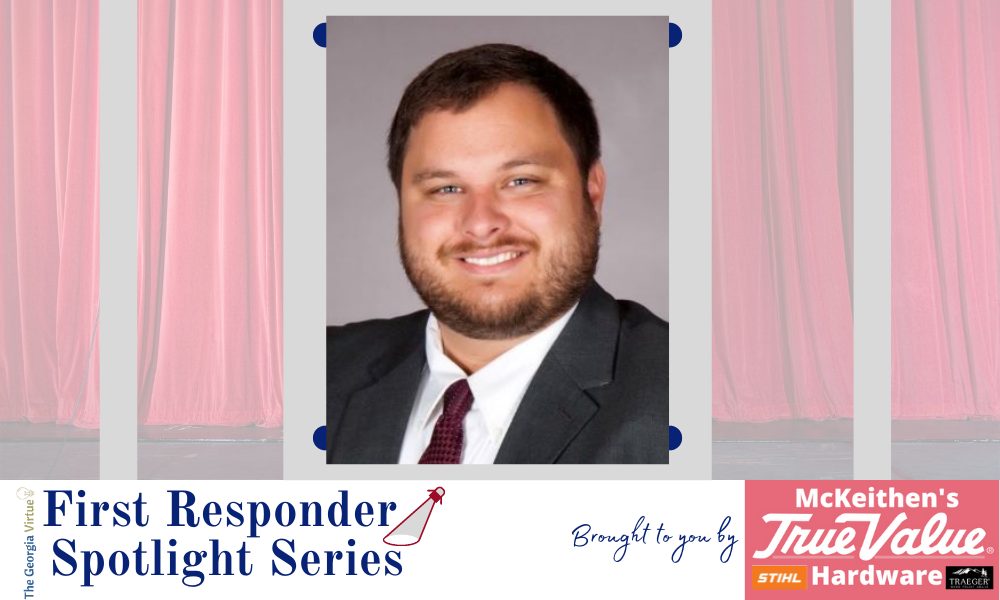 Sheriff Mac Edwards has been Evans County’s chief law enforcement officer for a little over six months now, but the office has transformed tremendously – both functionally and structurally – in that short period of time.

The Evans County Sheriff’s Office is in a unique location in rural southeast Georgia. Adjacent to the historic courthouse, the office has add-ons based on original rooms, enclosures where you wouldn’t expect them, and a maze of rooms winding to the back of the building. Since taking over in January, Edwards’ administration has worked to make the office more accessible and visible, including a modest office for the Sheriff himself right up front.

Edwards is obviously a familiar face in Claxton, but he has a network well beyond Evans County with his history working in both Bulloch and Tattnall counties. He started his career in the City of Claxton as a dispatcher and a volunteer fireman before he was sent to the police academy at Ogeechee Tech. Upon graduation, he was hired by the Glennville Police Department, where he worked for three years before he moved on to the Bulloch County Sheriff’s Office. There, he became a Field Training Officer, worked the Sheriff’s Targeted Enforcement Patrol team, and then Crime Suppression Investigations. In 2017, he returned to the Evans County Sheriff’s Office to work as an investigator and he worked in that capacity, and as the county EMA director, until he was elected as Sheriff in November 2020.

While he says he always knew he would want to run for sheriff one day, Edwards did not expect it to be so early on in his career. He’s just 30 years old, but Edwards comes from a family of influential law enforcement officials which simply made his career choice – and his political aspirations – a good fit. His grandmother was sheriff back in the 1940s, having been appointed one term and elected after that. His dad, John B. Edwards, was a law enforcement officer and then worked for the Georgia Bureau of Investigation for thirty years.

Some of the changes to the office have been minor, like the changes to the uniforms and the outfitted vehicles. Those things were paid for by seizure funds and not from general fund accounts. Other changes are part of long-term plans to expand the office to a point that it ebbs and flows with the community needs without a lag, funded from a number of sources, including grants, SPLOST dollars, and, of course, the county.

The county commissioners and the Sheriff’s Office have a great working relationship already, Edwards said in his interview.

“We’ve been very open about what we want to do. There’s a stigma that the Sheriff can just go and buy something, and by law I can, but when I’m a taxpayer and they’re taxpayers and we all have to answer to other taxpayers, I just felt like if we let them know what we’re doing and what we want to do ahead of time, it is going to work a little bit better for everyone.”

The Office has budgeted 40 hours of training for everyone on top of the state mandated and standardized minimums. “I’m a big believer of learning from others. I wouldn’t be where I am if I hadn’t learned from friends, experts, people who have done these things before,” he said.

Edwards also shut down the county jail a few months into his term, a facility that was well beyond a state of disrepair for its short 33-year tenure.  He said he shared with commissioners about the immense liability that existed because of it and they were supportive of his desire to outsource inmate housing in the short term.

Evans County has contracted with Tattnall County Sheriff Kyle Sapp to handle up to 20 inmates at any given time since the facility, which is in Reidsville, is just five miles from the county line. Even with transport costs and the contracted rates owed to Tattnall, the county has already seen considerable cost savings.

Luckily, it didn’t mean any job cuts for full-time jailers either. All three became transport deputies, assist with the sex offender registry, and serve as courthouse security and baliffs when court is in session – a first for Evans County. Edwards said the hope in the next year or two is to expand the courthouse security because of the growing need.

Also pertaining to security and the courthouse annex, the office has transitioned to a closed-door policy system for the buildings it is responsible for securing. All of the judicial offices and annex offices have either a lobby or a window at which the public can handle their respective business.

In closing the jail, the new administration has also been able to focus heavily on implementing new policies and initiatives, including an overhaul of internal policies for the office that will align with the way law enforcement has evolved in recent years. Edwards has relied heavily on the standards outlined by the Georgia Sheriff’s Association for those protocols.

Part of the reforms do include a detention policy for circumstances such as those that led up to the officer-involved shooting last year. If an individual is placed in handcuffs, they will be booked into the jail and transported to Tattnall County if the charges don’t warrant immediate posting of bond. Also related to the 2020 incident, every city officer in both Claxton and Hagan is deputized to make arrests in the county with a memorandum of understanding and guidelines for when the agencies will assist each other.

Most importantly, Edwards said, “We’re pushing to standardize how we do things…and then enforcing the standards.”

The Office also has a Road Patrol Commander to serve as a supervisor of road deputies, a position they hope to expand to a swing shift-based position so there is a superior officer to oversee every two-deputy shift. Specifically, the position is assigned to someone with more training and experience so deputies have a resource while on shift and can ask questions when necessary.

When he was sworn in, Edwards told his employees that he wanted three things: to be accountable, to be professional, and to be a part of the community.

For accountability, the office has repaired and replaced a number of the malfunctioning dash camera video cameras and is in the process of implementing body-worn cameras for every Sheriff’s Office employee. Transport officers, patrol deputies, and investigators and even the Sheriff will wear a body camera. If there is evidentiary contact or interaction with the public, there will be a camera. That, of course, naturally coincides with professionalism, in addition to the other initiatives already outlined.

As for the third point, Edwards said, he just wants an office that is embedded in the community it serves. “You can be the guy they run to when something’s going bad, that’s our job, but we also want to be there for the good.”