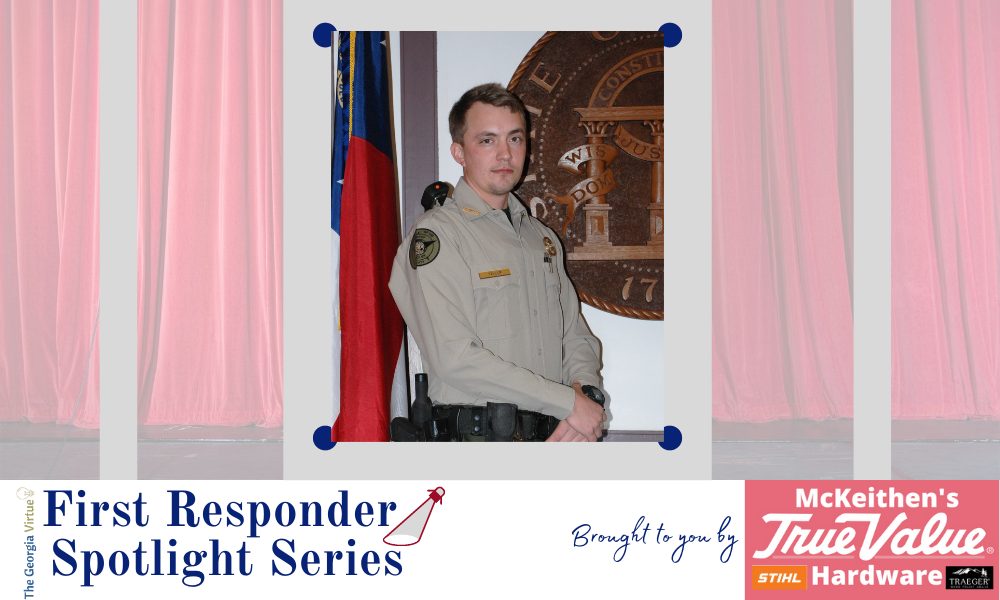 Sergeant Ashleigh Taylor of the Candler County Sheriff’s Office has been in law enforcement for almost five years. It wasn’t always his plan, but it’s where he belongs now.

A native of Jacksonville Beach, Taylor’s been in Georgia for roughly seven years, having moved to Metter to start farming. While he had a longtime interest in law enforcement and serving the community in some way, he doesn’t come from a long line of first responders and Taylor said he said he never really saw it as a career.

The idea of entering the law enforcement field didn’t gain momentum until Taylor requested information from Ogeechee Technical College’s Law Enforcement Academy in Hagan. When the school reached out about the recruitment process, Taylor said all the doors opened at the right time and he was able to go all in.

“I just wanted to do something that I felt was honorable and do it the right way,” Taylor said. He shared a story about a traffic stop in Florida that he felt could have been handled differently by the deputies, one he said has lingered in his head and reminded him to consider how the people he interacts with are perceiving what he is saying and doing.

Upon graduating in 2016, Taylor was hired by the Emanuel County Sheriff’s Office where he worked full-time for five months until he was recruited by a deputy friend in Candler County. Sheriff John Miles had just been sworn in for his first full-term in office and had a need for additional patrol deputies. Taylor continued to work part-time for ECSO for another six months or so before he transitioned to working for Candler County exclusively.

Since then, he was promoted to the position of Senior Deputy and served in that capacity for several years before recently advancing to the rank of Sergeant.

Sheriff John Miles said for the duration of Taylor’s tenure with the Candler County Sheriff’s Office, he has been consistent in his work product and extremely professional.

“We have a lot of great people in our Office and I’m very proud, but at the time of the nomination, Sgt. Taylor came to mind because of how he conducted himself recently during two extremely high stress situations. He was very calm and measured and did not rush to act without thinking.”

One of those incidents involved Taylor successfully talking a barricaded subject out of a home, giving the CCSO the ability to apprehend the subject without additional incident. Miles also said Taylor often works his own felony cases without the assistance of CCSO investigators and requires very little supervision generally. His work ethic and diligence contributed to both his recent promotion to Sergeant and his nomination by Miles for this Public Safety Spotlight.

In the short five years Taylor has been in law enforcement, he says it has changed drastically. “But you just roll with it, know each day is going to be different, and try to find a good cup of coffee.”

Candler County is home to Taylor, his wife Hayley, and their son, which is one of the reasons Taylor feels blessed to work there. “Our community doesn’t have the major problems you see elsewhere. We have a good relationship with the public, most people support us,” he said.

When asked why, Taylor said the answer was simple: “We’re fair. Unbiased as humans can be. We give everyone the same treatment and we’re professional. It’s what has kept me here.”

As for anyone looking to get into law enforcement in these seemingly unprecedented times, Taylor said they just need to think about it long and hard. “Once you’re in, you’re stuck. Not because you can’t leave, but if you’re good at it and you enjoy it, you can’t help but do it. And if you can get to that point, it’s very rewarding.”

Retired Georgia Teacher Inducted into a Hall of Fame