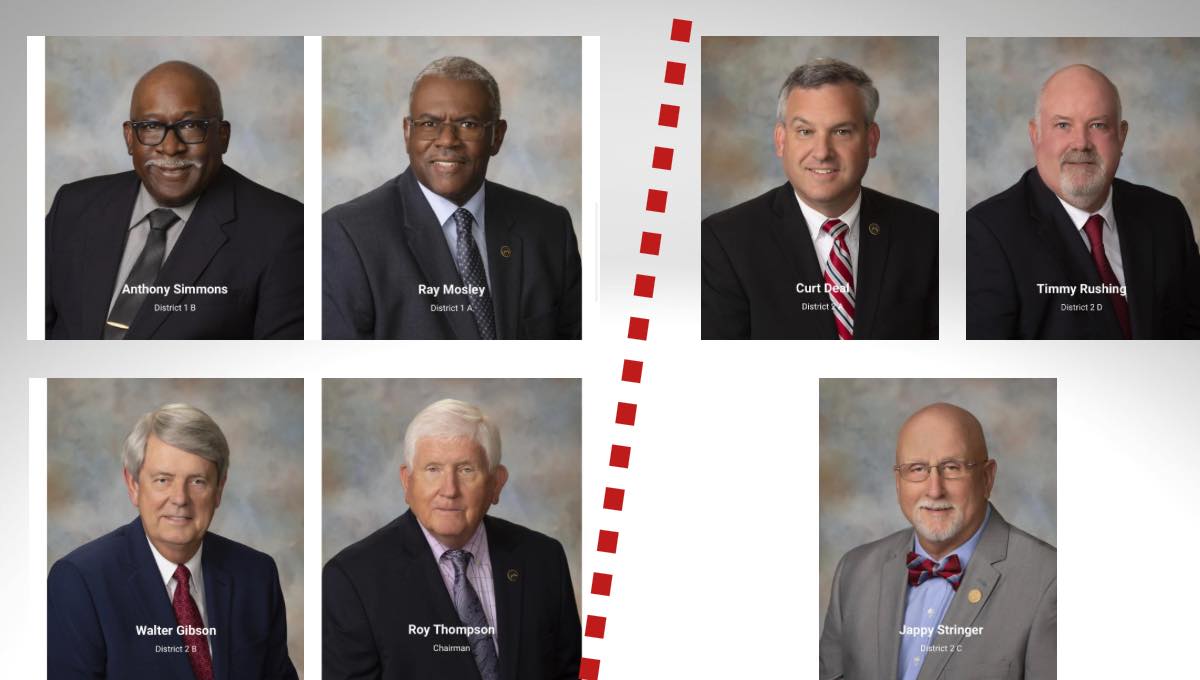 In a split vote broken by the chairman, Bulloch Commissioners were divided on yet another decision to delay the vote on employee retirement plans.

A workshop followed Tuesday’s regular commission meeting for the sole purpose of discussing possible changes to the employee retirement plan. The current plan and the proposed plan diverge when it comes to the liability for the county in the long run, but the ‘long run’ is another month closer after commissioners voted 4-3 to delay the vote until the November meeting.

Over a Year in the Making

Bulloch Commissioners created a study committee last year after Sheriff Noel Brown approached commissioners about revisiting the issue of an enhanced retirement benefits plan. At the time, Brown cited issues with recruitment and retention, not just with BCSO employees but county employees as whole, as the reasons for revisiting retirement structures.

The committee, charged with gauging the desires of county employees, included representatives from each department and the Sheriff’s Office. The main goal of the committee from the start focused on the implications and benefits of converting from a defined contribution retirement plan to a defined benefits plan. They met for the first time in September 2021 and then routinely over the months that followed.

In April 2022, BCSO Captain Marcus Nesmith, the committee’s selected chairperson, addressed commissioners with the findings of an analysis conducted by the Association of County Commissions of Georgia (ACCG). He delivered three possible scenarios, each with their own pros and cons and varying levels of support from county employees.

“This is a big ask. But we ask that you take your time and you do your due diligence and you decide. Which is the most viable and you come back in this room and you vote. I think that’s a fair ask for all the employees,” Nesmith said at the time.

Four month later, in August 2022, commissioners hosted a work session for a deep dive on a specific plan. Present for that meeting was ACCG Retirement Services representative Greg Gease. Gease facilitated county employees on the committee and those working on behalf of the commissioners throughout the process, often lending resources at no expense to the county. The focus at that time narrowed to a pension plan with a 1.5% multiplier with a normal retirement age of 65. The study group indicated their support for a pension plan with these parameters.

The proposal’s discussion concluded with an understanding of an additional 60 days for due diligence on plan structure, employee communication, and employee feedback.

The 34-page Due Diligence Report, prepared by County Manager Tom Couch and other officials, summarizes the work and findings from the past thirteen months. Couch said in a memo to commissioners within the report that the document was provided to give commissioners ‘information and data pertinent to evaluating that request.’

The plan details the origins of the data, the process to date, how the plan will impact current and future employees/retirees, and what the next steps would entail.

Under the county’s current operations, Bulloch County offers a defined contribution plan, which invests contributions (via 401a/457b plans) made by both the employer and the employee into an account, which is in turn invested in stocks. Subsequently, the value relies on market conditions. The County contributes 6.5% of participating employee’s gross earnings into a 401a defined contribution plan. It also adds a 50% match of up to 2% of gross earnings into the 457b account. The county has no long-term liability under this plan.

[More on pros and cons and what other counties do here]

Employees say the county’s current plan is unsustainable and keeps people from retiring because they cannot afford to do so – be it because of the low return or the fluctuation of benefits because of the volatility of the stock market.

The proposed plan changes the plan to a ‘defined benefits’ plan, which means the county pays eligible retirees in the amount calculated at their retirement.

The plans come with a higher level of liability because the county is obligated to pay out to retirees, even if the cash balance in the retirement account is depleted. Retirees, however, have more stability because they can count on the same payment every month.

According to the report, “If the plan account loses money due to market losses, the County’s unfunded liability for the plan would increase.”

Under the changes, employees who wished to return their money to the county and invest in the pension could do so, but it would not be required for current employees. New hires, of course, would enter the pension system. The “returned” money would be placed in an account and reinvested into the pension plan. The exact dollar amount cannot be estimated until all employees decide whether they will enter the pension plan, if it is approved by commissioners.

You can read the complete county Due Diligence report prepared by county officials here.

As commissioners entered the workshop portion of the meeting, Chairman Roy Thompson polled commissioners on whether or not they wished to make a decision on the retirement plan Tuesday.

Commissioner Walter Gibson announced that he needed additional time before making a decision. He stated that commissioners hadn’t had the report all that long. Commissioner Ray Mosley said he agreed because the decision they make will “long outlast” their time on the board. Commissioner Simmons seconded Mosley’s position.

Commissioner Timmy Rushing, on the other hand,  said he wanted to hear the employee presentation from the agenda but said, “I’m ready to make a decision today. I want to make that known,” he told his colleagues.

BCSO Captain Marcus Nesmith presented to  commissioners once again, providing them with a hard copy of the Due Diligence Report. He said that the report was emailed to everyone in the county on October 4th, two weeks prior, and the pension plan details themselves had been available for upwards of two months. Nesmith also detailed the lengths the committee went to in order to poll employees on their positions throughout the process. He said 209 employees were interested in the pension plan while 81 were not necessarily interested. He also said the committee convened several times over the last year without arguments or issues because everyone shared the same goal: finding a viable option for the county that benefited the employees.

“These people are here today because it matters to them,” Nesmith told commissioners, referencing the overflowing room. “We’ve done everything the board has asked us to do. This is a win for employees and a win for the county.”

Nesmith presented briefly before Chairman Thompson asked if any commissioners had any comment. None spoke up.

Thompson poses a hypothetical question of Nesmith about a 60 year-old employee with $363,000 in their 401 account. “Let’s day the employee gives all their money back. Retired. And dies the next day. What does their spouse get?”

Nesmith said the spouse would receive the death penalty from the pension, prompting Thompson to ask what happens to the rest of the money. Nesmith explained that the money would remain in the pension fund. “This is not a risk-fee decision. Nothing is. Every employee will have to decide for themselves what is best.” He also said that anyone could die the day after retirement, but that the majority of employees will not.

Thompson followed up with reference to other counties. “I asked for studies on other counties and I have a list. They don’t have pensions. They can’t afford it.”

“But you can,” Nesmith told Thompson. “It’s math. The numbers show this plan as projected offers a $285,000 savings for the county. That’s based off of what the county currently budgets for 8.5% of payroll for retirement. What taxpayer doesn’t want to hear about savings and employees getting a pension?”

“I just don’t want to see a tax increase to pay for it,” Thompson said.

Nesmith again reiterated that there is a projected savings for the county and that ACCG has facilitated the process from the start, never suggesting that this plan wasn’t viable for Bulloch County.

Another member of the employee study committee, Paul Conner, said that perhaps a more ideal way to look at the plan is without comparing to other counties but instead as a way to set Bulloch County apart from the rest.

Ultimately, Commissioner Ray Mosley said he would be good to make a vote either way but he wanted to make the best decision possible for the county to fund and sustain for years to come.

Chairman Thompson asked for a motion to delay the vote until the next commission meeting on November 1. That motion was made by Mosley and seconded by Gibson. Simmons also voted to delay a decision. Commissioners Rushing, Deal, and Stringer were opposed to delaying the vote again and voted No, causing a tie-breaking vote by Chairman Thompson.

2nd Britt Brother Slated to Plead to Federal Charges, More Revealed About Prior Lies Under Oath