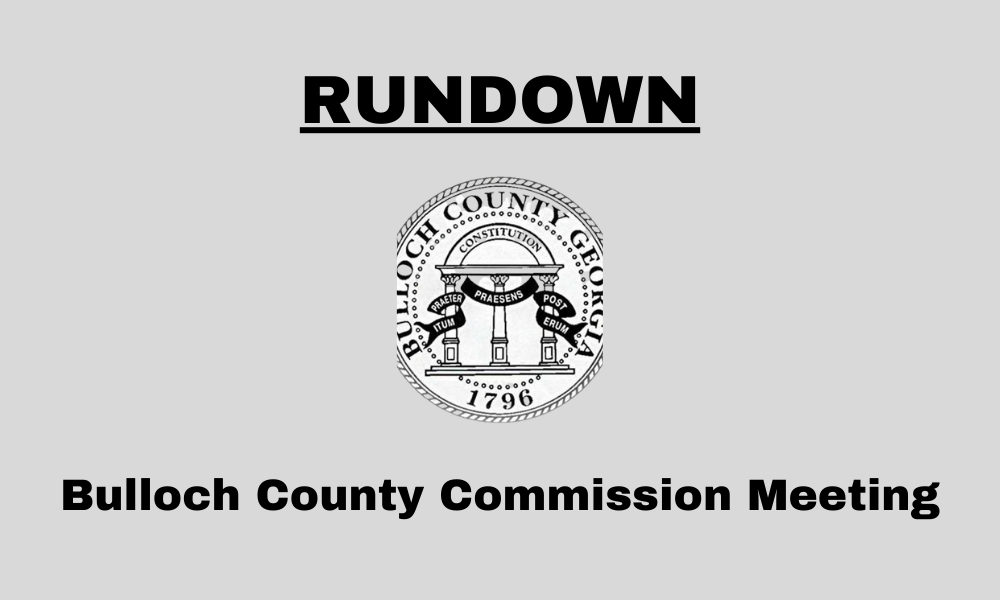 Citizen Sandra Butler appeared before Commissioners to express her concern about road conditions and littering on Hightower Road.

Commissioners unanimously approved the consent agenda, which included Resolutions to Establish Special Streetlight Districts in River Bluff, Iron Gate, and Chatham Place subdivisions, amendments to the FY 2021 budget, the renewal apparatus maintenance agreement with Palmetto Fire Apparatus Holding, LLC, approval of ambulance purchase from Custom Truck and Body Works, Inc, and the renewal the second of a three-year contract with Coca-Cola to provide beverages for resale at Concessions (Athletics, Splash in the Boro, & Ag Complex).

Vending Contract: In March 2020, a request for proposal was sent out to two primary beverage vendors, Pepsi and Coca-Cola. Pepsi did not submit a proposal. Coca-Cola has been the beverage vendor for Mill Creek Park since it opened in 1993, as well as Splash in the Boro and Bulloch County Ag Complex since their openings. The agreement will permit Bulloch County facilities to continue to serve Coca-Cola products, and to receive over $25,000 in benefits from them annually in return.

Possible relocation of the traffic signal by Georgia Power at Cypress Lake Road is under consideration.

The county has been working to resolve issues with Georgia Power on pole locations and has, over the last year, submitted new designs to try to accommodate the company’s needs. County engineer Brad Deal said the county has struggled to have adequate communication with GP, as they have only worked by email, and new designs have been rejected. He told Commissioners a meeting was recently scheduled for the near future in hopes of acquiring some sort of approval by GP so construction can begin, but the county could be facing a $287,000 expense on redesign if GP does not agree.

County manager Tom Couch emphasized Deal’s assertions and said he has also attempted to work with regional representatives from Georgia Power to negotiate a way out of a $287,000 expense to redesign the intersection entirely. He told Commissioners that the meeting with GP would dictate whether or not the $287,000 cost would be incurred, pending approval by the Board of Commissioners.

Commissioner Thompson expressed concern about conditionally approving the $287,000 expense if GP does not agree to one of the newer/amended designs. Thompson suggested that GP would have no reason to consider approving an amended design if they knew commissioners already approved an exorbitant expense for full redesign. He also said one of the top questions citizens inquire about is the status of that traffic light.

Couch concurred with Thompson’s concern and suggested deferring on approval of any new action until after county engineers meet with Georgia Power representatives since it would not unnecessarily delay the project.

Commissioners agreed and voted to defer the matter until after the next meeting with GP.

Adoption of Changes to the Employee Health Benefits Plan

Based on feedback offered by county employees in a monthly survey, minor changes were presented to commissioners for changes to the employee health plan, including the incorporation of telehealth coverage, added coverage of certain preventive services (including but not limited to routine physical examinations, immunizations, and laboratory blood tests) at 100%, and an increase to the annual limit on dental care by $250 per person covered.

Human Resource staff reported that there would be no immediate cost to the county, though an anticipated claim increase for the year would likely not surpass $50,000.

Commissioners voted unanimously to approve the changes to the health benefits plan.

Commissioners heard a presentation on the year-to-date budget position for the county. No official action was taken. Check back to The Georgia Virtue for the full article on this.