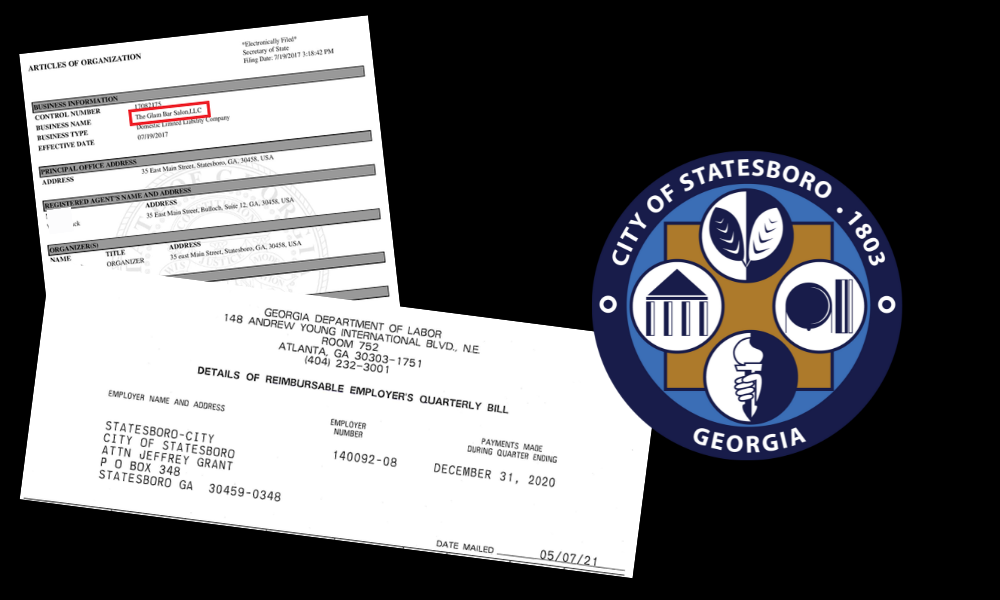 Councilwoman Venus Mack Hall was paid at least $378.00 in benefits for the part-time public service position, according to documents released under the Georgia Open Records Act. Hall was elected to serve the 3rd district in November 2019 and was sworn in in January 2020. She is not a former or current employee of the City of Statesboro and she operates her own business, The Glam Bar Salon, LLC,* which provides a number of salon services in Statesboro. As an elected official, Mack is not paid via wages but instead as a flat fee similar to that of a 1099-contractor.

The allocation of unemployment to Hall, who is listed on the city website, her official city council Facebook page, SOS paperwork, and on the unemployment documentation as ‘Venus Mack,’ is a curious one given the parameters of state law governing who is eligible to collect unemployment benefits.

The Georgia Virtue requested GDOL records for employment benefits paid out beginning in March 2020 and ending September 1, 2021, along with other paperwork, but only received the corresponding documents for one quarter during the request period.

Those public records indicate that Mack was paid at least $378 from the benefits paid into the Georgia Department of Labor unemployment fund by the City of Statesboro. The documentation provided was for the quarter ending December 31, 2020 but showed Mack with a benefit year running through March 27, 2021.

Despite alterations made during the pandemic, there has been no reduction in compensation for Statesboro elected officials in 2020 or 2021. But even in the event that there was such a reduction, Georgia law OCGA § 34-8-35 (2019) specifically exempts work conducted as an elected official and work conducted as a member of the legislative branch of any political subdivision as a type of ‘employment’ under Georgia unemployment law. No other elected officials in the City of Statesboro have received benefits, according to the records provided.

Additionally, Georgia law and paperwork filed by an individual seeking unemployment both stipulate that in order to collect unemployment benefits, an individual must file a Separation Notice they receive from an employer with the Georgia Department of Labor. If no Separation Notice is given to the ‘employee,’ it means that the paperwork is filed on behalf of the employer, or the City of Statesboro in this case.

The Georgia Virtue asked the City for a copy of Mack’s Separation Notice, but city officials said one did not exist.

The City, however, did not contest Mack’s filing against the City of Statesboro for the benefits.

Mack was asked for a comment on the matter and she provided the following response to TGV:

Thank you for reaching out to me directly. I’d heard that this might be a developing story, though I don’t have any details beyond hearsay. I’m not sure what is happening and , why in regards to unemployment payouts from the GDOL and the City of Statesboro.

As far as my unemployment benefits, I only received compensation after being laid off from United Airlines during the pandemic. I am not currently receiving any benefits.  I have not applied for any unemployement benefits from the city of Statesboro.

As a city council member, I want to see this city continue to thrive as its citizens thrive. 2020 presented a lot of challenges and I believe that both individuals and business have been doing the best they can to maneuver through an unprecedented time. Again, I don’t know the details surrounding this story, but I hope that every citizen and business owner is getting the support they need and can eventually move forward successfully.

If Mack erroneously received the money and did not pay the funds back to the city, the action could meet the standard for an ethics violation under the City of Statesboro’s Charter.

*Venus Mack Hall was the organizer and Registered Agent for The Glam Bar Statesboro every filing year until November 2020, when she transferred the organizer name to Devon Amir Mack, her 19-year-old son. Social media posts, however, indicate that Hall is still the operator of The Glam Bar and her son is employed elsewhere.