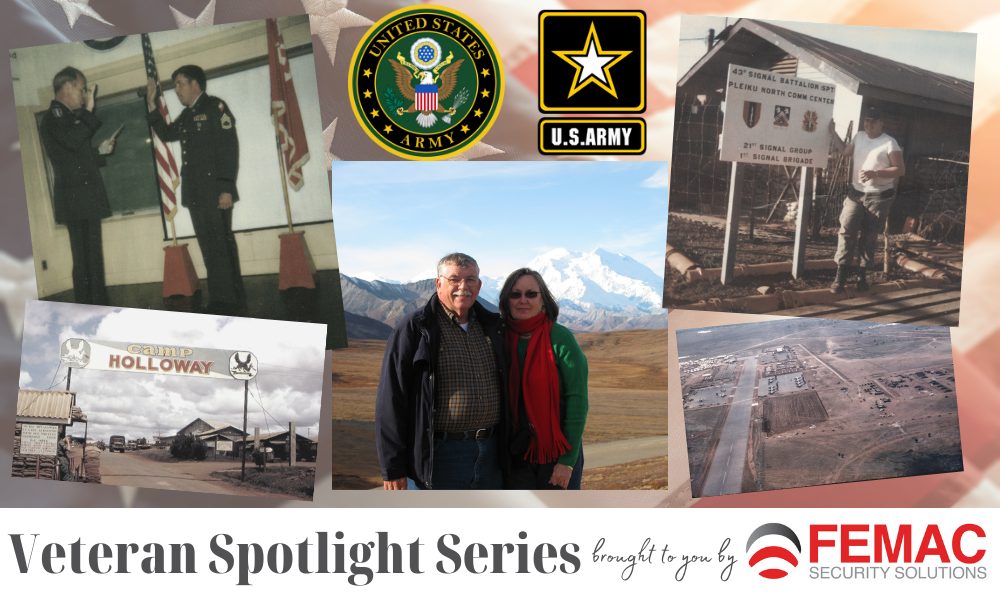 Alan Stewart enlisted in the U.S. Army when he was seventeen years old. In 1965, the Vietnam war was boiling and roughly 185,000 U.S. troops were in the Asian country. Enlisting instead of being drafted, of course, presented a host of other opportunities. He wasn’t the first one in his family to do so. His father was a D-Day Veteran who fought on Omaha Beach in Normandy during World War II.

He was sent off to Fort Dix in New Jersey for Basic Training. The eight-week stay yielded $69 per month in pay. He then spent time in Massachusetts before he was sent to Fort Gordon in Augusta. In early 1966, Stewart was off to France, though it wasn’t long before his communications-related operations were moved to Germany in late 1966.

He was working as a teletype operator and teletype interceptor. For those unfamiliar with the technology, radio operations then used Morse code to communicate with people on the same frequency because it cut through noise better than voices, given the quality. It was encrypted texting before encrypted texting as we know it today was ever a thing. Messages could be typed into the analog radio, a signal would be sent out and another radio receiver somewhere else would get the message. It allowed longer messages to be sent between administration and officers without fully revealing all of the details to everyone.

Germany would be where he would stay until 1968. There, he received his papers that he was headed for Vietnam and after a 30-day leave, Alan Stewart was off to Vietnam in June 1968. He was stationed in the Central Highlands which borders the lower part of Laos and northeastern Cambodia the year the number of U.S. troops in Vietnam peaked at nearly 550,000.

Among his first assignments was working in Torn Tape Relay. In this communication, messages were sent by cutting a tape, feeding it into a machine, sending it, taking the next cut of tape, feeding it into the next machine, sending it, and so on until the entire tape was relayed to the intended recipient. He worked that job for three months before he was sent to an outlying station where a Buck Sergeant was needed. Stewart had been promoted by that point and subsequently stayed with a combat engineer group until roughly May of 1970.  When the combat engineer group moved, Stewart was ordered to Camp Holloway Combat Aviation for the next five months.

In sharing his stories, Stewart said he wasn’t in combat, but when pressed on the conditions of the country at the time of his deployments, he conceded that they were mortared and rocketed a number of times even though his specific job was not ‘front line’ oriented. He recalled one instance at Camp Holloway:

“There were only two of us working out there so we were working 12-hour shifts seven days a week. For some reason, I was late. When the other guy came to get me up and we were still in the barracks, a rocket came and hit the building where all of the operations were. If we’d have been there, that would have been it.” Laughing, he said, “I never worried about being on time after that.”

Stewart said he was fairly disconnected from everything that was happening elsewhere. “We got a newspaper maybe once a week,” he said.”We were kind of in a vacuum in Vietnam, never really knew what was going on. I wasn’t aware of all the political stuff that was going on about it while we were there.”

In September 1970, Stewart returned stateside to Fort Meade near Annapolis, Maryland, but not for long. In January 1972, Stewart returned to Vietnam. By this point, the war was almost to the point of winding down but tensions remained high. Toward the end of the tour, the unit began shutting down operations, turning equipment over to contractors, and preparing to return home. Stewart, however, had to reenlist from abroad in order to help his unit finish the drills. They officially pulled out of Vietnam on March 21, 1973. Roughly 6,500 troops remained when he left.

During the interview, Stewart recalled marching from the base camp to the airstrip.

“It wasn’t very far, only a couple miles. We had to turn our weapons in at the plane and we got checked off the list. While we were doing all of that, the Vietnamese were going into the compound taking sinks off the wall, commodes, beds, anything they could carry.”

Returning to the U.S., Stewart found himself back at Fort Gordon and would call the base ‘home’ for the next four years. During that time, in 1975, Alan Stewart met Sharon, who was in the National Guard stationed at Fort Gordon and attending AIT for school. She was an honor student. He was an instructor…but not her instructor.  After dating for about three months, they married at a courthouse in Aiken, South Carolina. In 1976, they welcomed their first child, Shannon, and their sons Philip and Anthony would follow in 1980 and 1986, respectively.

Stewart was ordered overseas again in 1977, just before his first born’s first birthday. Stationed near the North Sea, Stewart ran the communications center and managed the data before he was promoted to the Comm Center Chief for the Battalion, which meant he was responsible for stations in England, Belgium, Holland, and in Germany. Stewart routinely traveled to various stations while Sharon and their young daughter remained at their apartment in Germany, a place Sharon said she loved.

In 1980, he became a Staff Sergeant and the family returned home to Fort Gordon. During that time, he worked as a Warrant Officer and in 1983, Alan Stewart was promoted to Sergeant First Class. In 1984, the family returned to Germany again and Stewart’s main mission was to support the brigade responsible for nuclear weapons. It was a completely different operation, with the brigade moving on a near-daily basis and Stewart’s team setting up support sites across the region.

In 1987, after 22 ½ years, Alan Stewart retired from the U.S. Army as a Chief Warrant Officer. When the family of five made it back to the United States, Stewart enrolled in school at Georgia Southern. He went on to get Associate’s degrees in both liberal arts and business and then returned for a Bachelor’s degree in business, with a desire to teach high school. Before Stewart was able to land a job teaching, he ran into two guys he had once been stationed with and they suggested he apply with their company.

GTE Corporation had a contract with the U.S. Army dealing with communications systems and automated data. Alan was hired as an Instructor and simultaneously worked to get the network system up and running. After a period of time there, he spent four years at Georgia Southern in programming while also attaining his Master’s degree. But his path took him back to GTE Corp, which had been acquired by General Dynamics at Fort Gordon, and that’s where he remained until he retired in 2010. He went on to do some part-time contract work on various projects, but by and large, made more time to travel and be with family once he called it quits on his full-time gig.

Alan and Sharon have now been married for 47 years. She retired in 2017 after working as an L.P.N, a job she referred to as ‘the best job’ she ever had. She had attended Ogeechee Tech when they returned stateside as well and at some point over the last few decades, all of the Stewarts attended the technical college for some degree or certification.

In reflecting on his time in the Army, Stewart said he enjoyed all of the work that he did, but found his time teaching at Fort Gordon to be the most satisfying. “Teaching during the day and learning at night was really great.” The most difficult part was a little more complicated.

“Having to move so much was hard, but coming home, especially from Vietnam, was hard. I had a real hard time dealing with the political side of things and a lot of people weren’t aware of what so many were willing to invest in for their country,” he said.

Stewart also talked about the hardships that followed following the mass exodus of trained non-commissioned officers. So, the guys that were trained and experienced had lower ranks. It was hard to rebuild and hard to train new people in the middle of all of that.”

Overall, it was an experience he wouldn’t undo or do differently, given the chance. When asked what the best thing about his service was, Stewart said “taking every opportunity given to him, opportunities he wouldn’t have had otherwise.” For anyone considering enlisting, Stewart said one must have a goal and know what they want to do. “Talk to recruiters, know what you’re getting into before you sign the dotted line.”

Did you enjoy the feature on Alan Stewart? Read other Veteran Spotlights on The Georgia Virtue.

If you would like to nominate a veteran to be featured, please complete the following form.