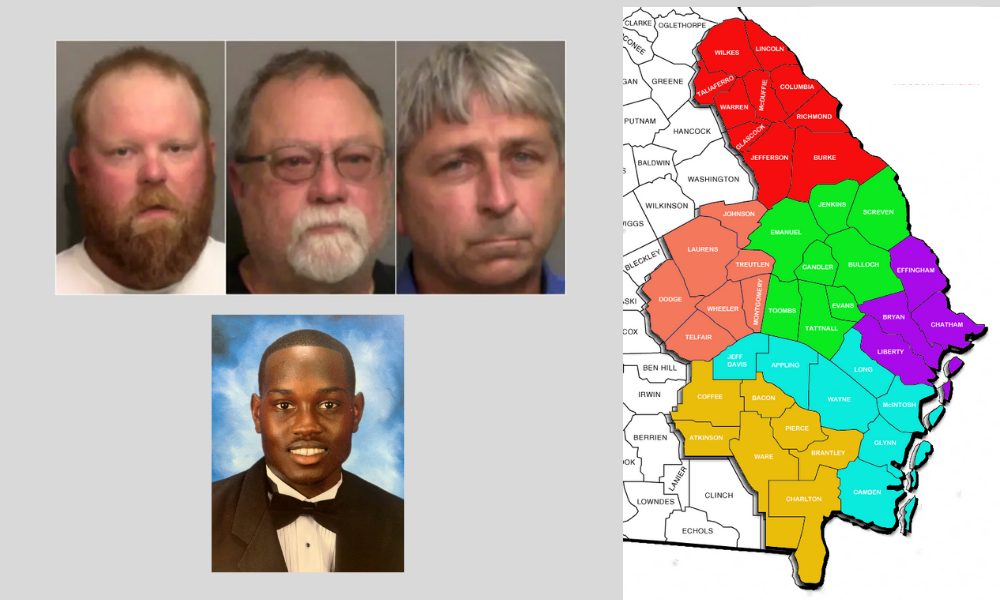 Jurors should come from the entire 43-county region that encompasses the Southern District of Georgia for the upcoming federal trial against Greg McMichael, Travis McMichael, and William “Roddie” Bryan.

That’s what lawyers on both sides said before a judge in U.S. District Court this week. “Casting a wider net for potential jurors will improve the odds of seating an impartial jury,” the Associated Press reported on Thursday’s proceedings.  The AP also stated:

Like the state trial, the federal case will be tried in Glynn County, where the killing occurred just outside the port city of Brunswick. Typically, a federal jury would be drawn from residents of Glynn County as well as six neighboring counties that make up the Brunswick Division of the federal court system’s Southern District of Georgia.

In the motion filed in court, attorneys said: “The parties believe that it is likely that many potential jurors from the Brunswick Division will have experienced sustained exposure to the case and may have formed immutable opinions, in one direction or the other, that will ultimately preclude them from sitting on a jury in this case.”

The broader net opens up the jury pool to approximately 1.6 million people, which attorneys say could keep the jury selection process from moving as slowly as it did in the state trial in Glynn County. To speed up the process, prosecutors and defense attorneys have also asked the judge to consider allowing a 14-page questionnaire to be sent to jurors with their service notices. Doing so would allow attorneys to weed through and strike jurors based on questions that are traditionally asked by both sides regardless.

Defense attorneys have also asked that the trial take place in another city still within the Southern District of Georgia. A decision was not immediately rendered.

All three defendants were found guilty of varying crimes, including felony murder, after a lengthy trial in Glynn County. The jury returned the verdicts the day before Thanksgiving. The three were charged in the February 2020 death of 25-year-old Ahmaud Arbery after Bryan recorded the moments leading up to the shotgun shooting of Arbery by Travis McMichael. Arbery had been jogging on foot when both McMichael’s began following him in a pickup truck.

The federal trial is slated to begin February 7, 2022. They now face hate crime charges alleging that they violated Arbery’s civil rights, when they pursued him and threatened him on a public street, purportedly because he was black.

Counts One and Two of the indictment allege that the defendants used force and threats of force to intimidate and interfere with Arbery’s right to use a public street because of his race. Specifically, Count One of the indictment alleges that as Arbery was running on a public street in the Satilla Shores neighborhood of Brunswick, Georgia, Travis and Gregory McMichael armed themselves with firearms, got into a truck, and chased Arbery through the public streets of the neighborhood while yelling at him, using their truck to cut off his route, and threatening him with firearms. Count One also alleges that the offense resulted in Arbery’s death. Count Two alleges that William “Roddie” Bryan joined the chase and used his truck to cut off Arbery’s route.

In addition to the hate-crime charges,

Count Three alleges that all three defendants attempted to unlawfully seize and confine Arbery by chasing after him in their trucks in an attempt to restrain him, restrict his free movement, corral and detain him against his will, and prevent his escape.

Counts Four and Five allege that during the course of the crime of violence charged in Count One, Travis used, carried, brandished, and discharged a Remington shotgun, and Gregory used, carried, and brandished a .357 Magnum revolver.

All three have entered ‘not guilty’ pleas.
Read the complete federal indictment here.