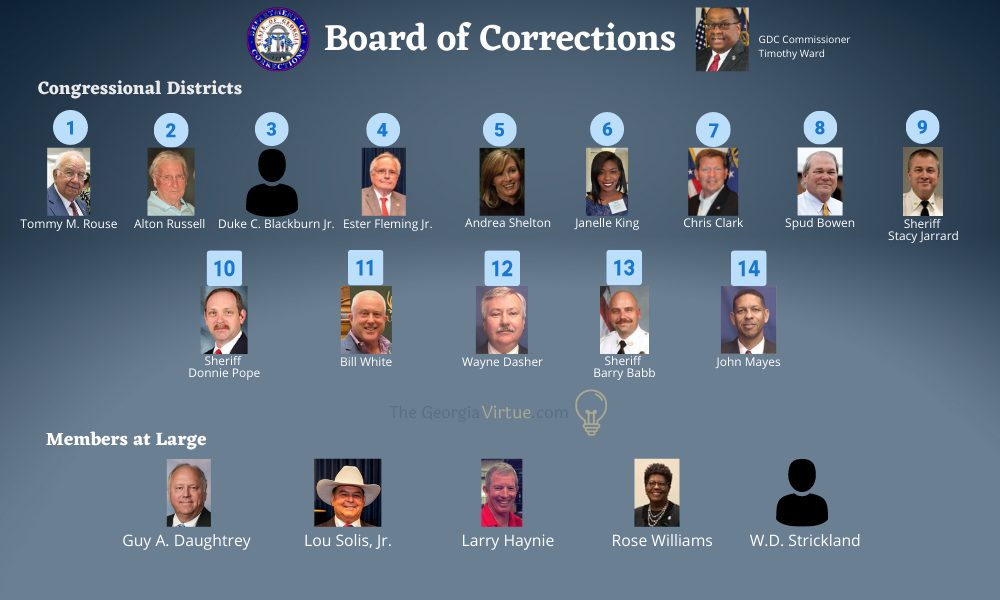 A deep dive into the backgrounds of the appointees on the Board of Corrections for the State of Georgia reveals that more than half of the members don’t even work in an industry related to corrections.

In fact, only three of the nineteen have ever worked in a prison and only one currently does and he happens to be the Commissioner of the Georgia Department of Corrections.

The examination is particularly concerning given that the Board is not advisory and was created by state law to write the policies on how the state corrections system operates.

What the Board is Supposed to Do

The Board of Corrections is composed of 19 members, one from each congressional district in the state and five members from the state at large. The Governor appoints all members to serve staggered five-year terms. They are not elected and are not accountable to the people of Georgia.

According to the state GDC website, the Board “develops rules governing the conduct and welfare of employees under its authority. These include the assignment, housing, feeding, clothing, treatment, discipline, rehabilitation, training, and hospitalization of all inmates coming under its custody. OCGA § 42-2-11 outlines a lengthy list of policies the board is charged with maintaining. The job is not ‘volunteer,’ as members are compensated on a per diem basis, plus expenses.

The Board of Corrections makes the policy. The operations and management of the GDC institutions, and facilities themselves are the responsibility of the Commissioner – who serves on the Board.

What the Board Has Actually Been Doing

In 2021, Board meetings have consisted of the following subjects:

Link to Board Meeting Minutes.

What Has Not Been Discussed

The latter three items were included in presentations by GDC employees, but not discussed by the Board. They merely ‘received informational updates.’

So who serves on the Board?

The website for the Board of Corrections offers no information on the training and experience of the members, some of whom have been serving for 17+ years. All of the information contained below was obtained through public records and newspaper articles.

BOARD OF CORRECTIONS MEMBERS

GDC Commissioner Timothy C. Ward
Ward was appointed by Governor Kemp in February 2019. Ward began his career as a correctional officer and worked his way up through the ranks. State documents note that Ward’s job is to “protect the public by supervising more than 50,000 state offenders through the operation of secure and safe facilities, while reducing recidivism through effective programming, education and healthcare.”

1st District: Tommy M. Rouse
Rouse was appointed by Governor Sonny Perdue in February 2004. He is 89 years old. He has no corrections experience but worked probation for municipal courts which handle misdemeanor and traffic offenses.

2nd District: Alton Russell
Russell was appointed in July 2013 by Governor Nathan Deal. Russell has no corrections experience and has spent the last 35 years selling janitorial products to nursing homes and jails. He is 83.

3rd District: Duke C. Blackburn Jr. (Chairman)
Blackburn was appointed by Governor Nathan Deal in March 2013. Blackburn retired from the Ga. Dept. of Corrections in 2009 after 20 years of service. He worked as a Hostage Negotiator, a Counter Sniper and a K-9 Instructor and a 1989 report from GDC lists him as warden for the Coweta County Correctional Facility. He is also a founding member of the U.S. Marshal Southeast Region Fugitive Task Force

Fleming was appointed in August 2019 by Governor Brian Kemp. He is the father of Kemp’s Chief of Staff at the time of his appointment. He has no corrections experience and owns a real estate holdings company. He’s 73.

5th District: Andrea Shelton (Secretary)
Shelton was appointed by Governor Deal in 2014. She is the Executive Director of HeartBound Ministries, a nonprofit that contracts with prisons to “meet the needs of the prison community — incarcerated people, their families, and correctional staff.” It does contract with DOC. Shelton is a lawyer by trade and has never worked in a correctional facility. She helped organize a program in which inmate art is auctioned to the public – and a portion of the proceeds went to her charity.

6th District: Janelle King
King was appointed by Governor Kemp in August 2020. The 35-year-old was previously a Republican volunteer community event organizer but now works for her husband’s company. Her husband is Kelvin King, who is running for United States Senate. She has no corrections experience.

7th District: Christopher Clark
Clark was appointed by Governor Deal in September 2016. He is the sales manager for Stephens Industries LP, a residential construction company.

8th District: J.C. “Spud” Bowen
Bowen was appointed by Governor Kemp in August 2020. He is the president of Spud Bowen & Associates – Herff Jones, which creates class rings and letterman jackets, and he has worked with the company for over 40 years. He unsuccessfully ran for Georgia Senate in 2020 and his appointment came shortly thereafter. At age 59, he has no corrections experience.

9th District: Stacy Jarrard
Jarrard is the current Sheriff of Lumpkin County, which means he operates a jail. He was appointed by Governor Deal in November 2012.

10th District: Donnie Pope
Pope was appointed by Governor Kemp in August 2019. He has been the Sheriff of Jasper County since 2012, so he is familiar with the duties of operating a jail. He is 48.

11th District: Bill White
White was appointed by Governor Kemp in August 2020. He is the CEO for Constellations Group Ltd, a “consulting firm that advises corporations, foundations, and high-net-worth individuals with their business challenges and philanthropic endeavors.” He also has a culinary arts degree. He has no experience in corrections.

12 District: Wayne Dasher (Vice-Chairman)
Dasher was appointed to the Board in 2004 by Governor Sonny Perdue and has served in perpetuity ever since. He doesn’t have any background in corrections, according to a Statesboro Herald article on his career, as he spent his life in the banking industry. He is 71.

13th District: Barry Babb
Babb was appointed by Governor Kemp in August 2020. He is the Sheriff of Fayette County, which means he has operated a jail, and has 30+ years of experience in law enforcement. He is 55.

14th District: John Mayes
Mayes was appointed by Governor Sonny Perdue. He served as a Commissioner in Floyd County for decades and is the owner of Pro Systems Clean Care, a cleaning and restoration company that opened in 1983. He has never worked in corrections and is 69-years-old.

W.D. Strickland
When Strickland was appointed is unclear. He has served as a Regional Principal in the Office of Education for the Georgia Department of Juvenile Justice. The DJJ does not have

Guy A. Daughtrey
Daughtrey was appointed by Governor Kemp in August 2021. He retired after 38 years as an auditor for Southern Company where he worked in accounting, operations, and admin budgeting. He has no experience in corrections. He’s 71.

Rose Williams
Williams was appointed by Governor Deal in 2015. She has worked as a prison warden in GDC and also supervised youth detention centers.

Larry E. Haynie
Haynie was appointed by Governor Deal in 2015. He is co-owner of Georgia Arms and Master Cartridge in Carrollton. He has no experience in corrections and is 65-years-old.

Luis “Lou” M. Solis Jr.–
Solis was appointed by Governor Kemp in September 2019 and announced his candidacy for Sheriff 6 months later. At the time of appointment, he was Chief Deputy of Gwinnett County Sheriff’s Office. His current employment is not known, but he once worked for Braselton PD, as a hostage translator for Georgia State Patrol, and as an Army Ranger. He is 61.

Board Attorney: Tina Piper of the Georgia Attorney General’s OfficeBoard Liaison: Simone Juhmi, an administrative assistant for the Georgia Department of Corrections.

In this article:Georgia Department of Corrections, Governor Brian Kemp