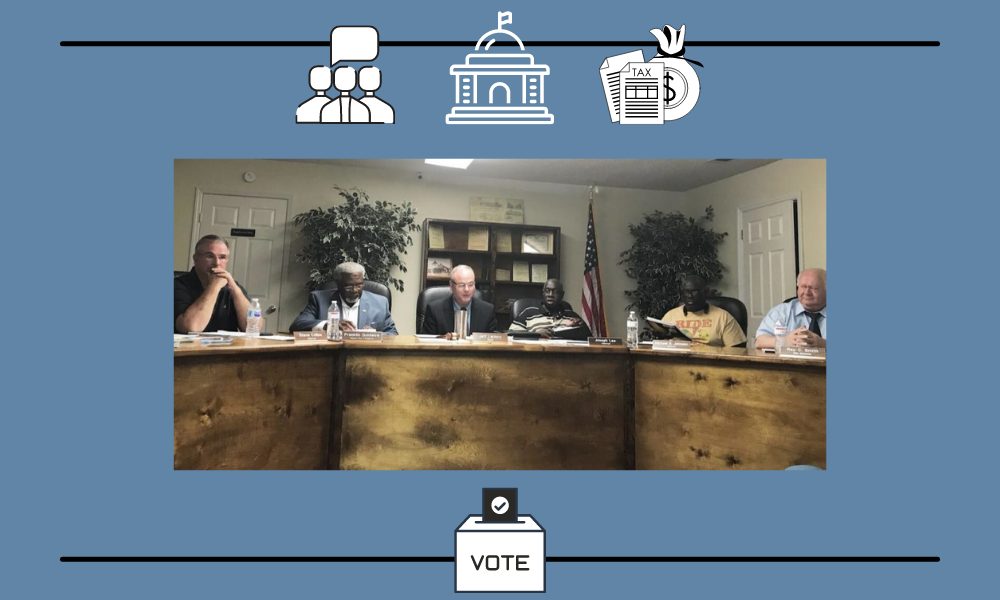 A number of citizens left the Guyton City Council meeting angry after a motion to appoint a new police chief failed not once, but twice in the same meeting.

The council meeting room was standing room only when the meeting convened Tuesday evening. Nearly 40 minutes into the agenda action items, Mayor Jeff Lariscy announced his desire to once again discuss the consideration to employ Richard Zapal as the Police Chief. Lariscy said that after an article in The Effingham Herald highlighted a number of Zapal’s recommendations and additional ‘independent information’ on Zapal’s 30+ years in law enforcement, all of which was in the Savannah Police Department, he would like to discuss the matter again

Councilman Joseph Lee vocalized his opposition to the hiring, citing disdain for the three applications brought before council for consideration. Lariscy was responsible for narrowing the candidate pool from six to three and presenting the choices to a committee and then to council, per the governing rules of the City Charter.  Along with the Interim City Manager Alison Bruton, Councilman Steve Collins, Russ Deen, Mr. Hoffman, Mr. Lee, and Effingham County Sheriff’s Office Chief Deputy Richard Bush, Lariscy ultimately interviewed three candidates for council’s consideration. The process outlined by the City Charter is standard for municipalities around the state.

But while Lee said Zapal was the most qualified of the three candidates presented to council, upon reviewing the six applications, he felt that the most qualified candidate was overlooked. Standing to distribute copies of resumes, Lee stated he had a more qualified candidate. “Mr. Mayor,” Lee said as he tossed the packet to Lariscy, “…here you go. You did not include that man right there in there. You did not include him. You gave me three applications that he beat out, but as I look through the six of them, here you go.”

Lariscy said he could not immediately recall why the candidate – who was not named during the initial discussion – was eliminated from consideration, but Councilman Steve Collins noted that the elimination was due to the candidate’s expected salary of $70,000 when the City had only budgeted $50,000.

“That’s something we could have negotiated. We cannot not interview someone because of price,” Lee told his colleagues.

“Actually, I think if we approve a budget for a certain amount, we do have to consider that,” Lariscy told Lee.

Lee also took Lariscy to task over the qualifications due to the advertisement for employment for a Public Safety Director who would be responsible for overseeing both police and fire. “He didn’t have no experience in fire and he was not qualified for a chief,” seemingly referencing that Zapal had not yet been to Chief’s School. Georgia, however, does permit a POST-certified person to act as an interim chief for a limited time or to be employed as chief without the Chief’s School education so long as the person is enrolled in the next class offered – a notion that was not brought up during the meeting.

Lariscy maintained that the committee considered candidates based on the approved budget and the fire experience was less important now that the City handed over fire services to the county. He acknowledged Lee’s concerns but asked that the Council still re-consider the appointment of Zapal.

Councilman Collins followed Smith’s warning with a motion. “For the third time, I’d like to recommend that we hire Mr. Zapal.” The motion was not initially seconded, so Mayor Lariscy exercised his authority to second for the purposes of furthering discussion, again asking council members to not vote based on the process, but on the applicants.

Lee and Councilman Johnson both noted that ‘Coppola,’ referring to the current interim chief Joseph Coppola, was not interviewed either. “He was qualified for fire and the chief of police,” Lee told Lariscy, who said he would refrain from commenting on that matter specifically. Coppola was standing in the back of the room during the discussion.

The motion to employ Zapal, however, failed to garner a majority with council members Lee, Johnson, and Goldwire voting no.

“We’ll move forward then,” Mayor Lariscy said. “And perhaps you gentlemen will explain to the citizens of Guyton why we will be collecting taxes without providing services we agreed to provide.”

Citizens were vocal in their disdain for the decision, many speaking out from the audience and offering questions of council members.

“Well, isn’t that surprising,” one lady said from the audience.

Citing her own background in staffing, another resident expressed her dissatisfaction with the state of the police department and the council’s decision. “I think that it’s in poor form that we have a reservation of a process rather than a reservation of a candidate that has 30 years experience that can help take care of the citizens of our city. Mr. Lee…if you had a better candidate, why didn’t it come out before a council meeting when you knew this was going to be on the agenda tonight?”

“Are you saying because I didn’t aware him [the mayor] of it?” Lee asked. “When he threatened a face off with me, I wanted to get him in the public. Not on Facebook.” His statement was met with a number of comments from citizens, calling Lee’s behavior high school-like and childish.

The same woman asked Lee how long he had the candidate’s resume before the meeting, but Lee said he did not have to answer her question. “That’s the problem,” she said. “It’s unfortunate that a process has compromised the safety of citizens.”

Lee accused the mayor of misleading the citizens on the best candidates, but Lariscy maintained the process was correct and that the budget was a sound reason for eliminating a candidate. Councilman Johnson said the candidate Lee wanted had 26 years experience and that the city council have negotiated the salary.

Councilman Collins asked if any of the candidates present and running for office would like to offer their opinion on the matter, which Lee objected to but was overruled by Lariscy who said it was part of the public comment which is permitted on agenda items.

Russ Deen, who is running for mayor, served on the selection committee and said Zapal was most qualified. “Even though he was interviewed for Public Safety Director, I had no issues with him not having as much fire experience as other candidates and felt he would have brought something to Guyton for the price agreed upon. When asked about salary and why he could take less, he said “I’m a pensioned officer and I just want to continue to work.” It was my vote and I said we should bring him in.”

Post 2 Council candidate Andy Harville said the lengthy list of recommendations for Zapal led to his support for the hiring of Zapal.

Mayoral candidate Michael Garvin and Post 2 Council candidate Hursula Pelote both stated that they did not have enough information or detail to offer support or not offer support to hire Zapal. Garvin did, however, say that a salary is not a reason for someone to be eliminated from consideration. “I wasn’t the right road to walk down,” he said. “With it just being six, everyone probably should have had a look at it.”

Additional citizens voiced opposition to the failure to hire and noted that the decision not to hire by Lee, Johnson, and Goldwire was because of personal reasons, not qualifications.

“We need to provide the services we agreed to provide,” Lariscy said. “We have a highly qualified candidate that is willing to serve. He may not be Mr. Braxton (referring to Lee’s pick), but Mr. Braxton wanted $70,000 according to his application.” Mayor Lariscy again asked for a motion to employ Zapal.

“Y’all are the ones who wanted to close the police department down,” Johnson said. “So, I’m a no.”

“Thank you gentlemen,” Lariscy said as a number of citizens cleared the room uttering their disdain. “Elections are coming,” Larisy said.

A number of other agenda items were discussed before members adjourned to go into closed session to discuss litigation, including the monthly report for September as offered by Interim Chief Coppola. Coppola reported that Guyton responded to 191 calls for service in September with another 9 answered by the Effingham County Sheriff’s Office for GPD. He also reported 6 incident reports, 3 accident reports, 2 arrests, and 6 citations.

Upon returning from executive session, the council members had two litigation-related matters before them on which they needed to take action due to the city being served with ante litem notices.

An ante litem notice, or a notice of intent to file a lawsuit, is the official documentation required to initiate suits against local government entities and doubles as an opportunity for a settlement before the issue moves into the court system. Both notices were set to be denied by council following discussion in closed session.

The second of the two claims, however, was initiated by current interim police chief Joseph Coppola. When asked by Mayor Lariscy for a motion, no council member vocalized their intention to move on the matter, so Lariscy exercised the authority granted to him by the city charter and made the motion himself, which was finally seconded, and ultimately passed 4-0.

The meeting was promptly adjourned just before 10:00 p.m.