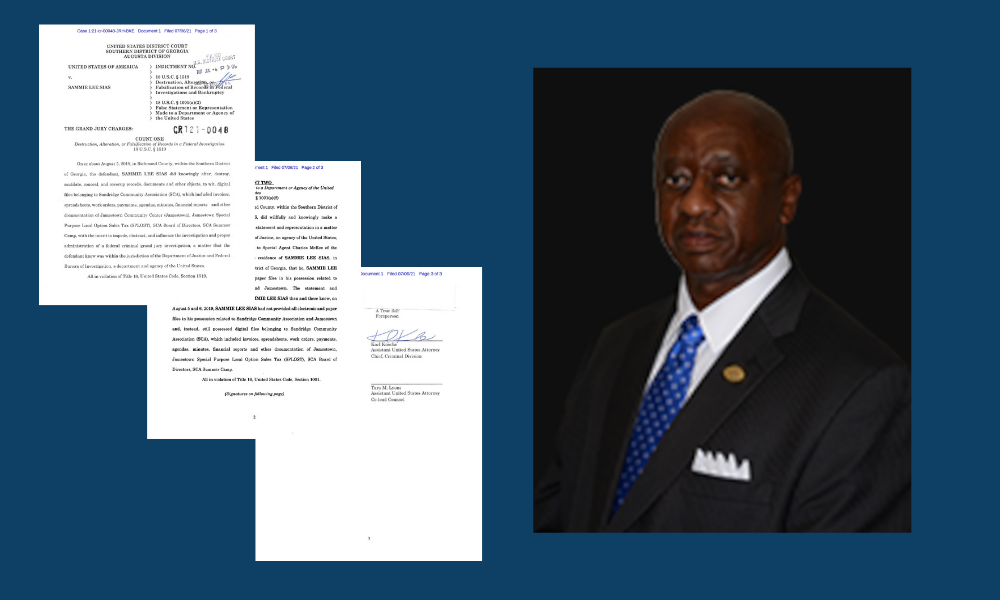 Sammie Lee Sias, 66, of Hephzibah, Ga., who serves as District 4 commissioner on the Augusta Commission, is charged with Destruction, Alteration, of Falsification of Records in Federal Investigations; and False Statement or Representation Made to a Department or Agency of the United States, said David H. Estes, Acting U.S. Attorney for the Southern District of Georgia. The charges carry a maximum statutory penalty of up to 20 years in federal prison, along with substantial financial penalties and up to five years of supervised release following completion of any prison term. There is no parole in the federal system.

“Federal investigations play a significant oversight role in maintaining integrity and transparency from elected officials and in government agencies at all levels,” said Acting U.S. Attorney Estes. “We commend our law enforcement partners in the FBI and GBI for their diligence in seeking timely and accurate information from those who are chosen to serve the taxpayers of our communities.”

As outlined in Count One of USA v. Sias, the indictment alleges that on or about Aug. 5, 2019, Sias “did knowingly alter, destroy, mutilate, conceal, and coverup records, documents and other objects, to wit, digital files belonging to Sandridge Community Association (SCA), which included invoices, spreadsheets, work orders, payments, agendas, minutes, financial reports and other documentation of Jamestown Community Center (Jamestown), Jamestown Special Purpose Local Option Sales Tax (SPLOST), SCA Board of Directors, SCA Summer Camp, with the intent to impede, obstruct, and influence the investigation and proper administration of a federal criminal grand jury investigation.”

Subsequently, Count Two alleges that on or about Aug. 9, 2019, Sias “did willfully and knowingly make a materially false, fictitious, and fraudulent statement and representation in a matter within the jurisdiction of the Department of Justice, an agency of the United States,” when Sias told an FBI special agent that he had provided all electronic and paper files in his possession related to the investigation.

Arraignment on the charges has not yet been scheduled.

“The alleged cover up was not only a violation of the oath taken by this elected official, but a theft of the public’s trust,” said Chris Hacker, Special Agent in Charge of FBI Atlanta. “Public corruption is one of the FBI’s top priorities and we will do everything in our power to pursue officials who abuse their positions.”

“Elected officials must uphold the public’s trust,” said Georgia Bureau of Investigation Director Vic Reynolds. “The GBI is committed to working with federal partners to hold accountable those who would violate that trust.”