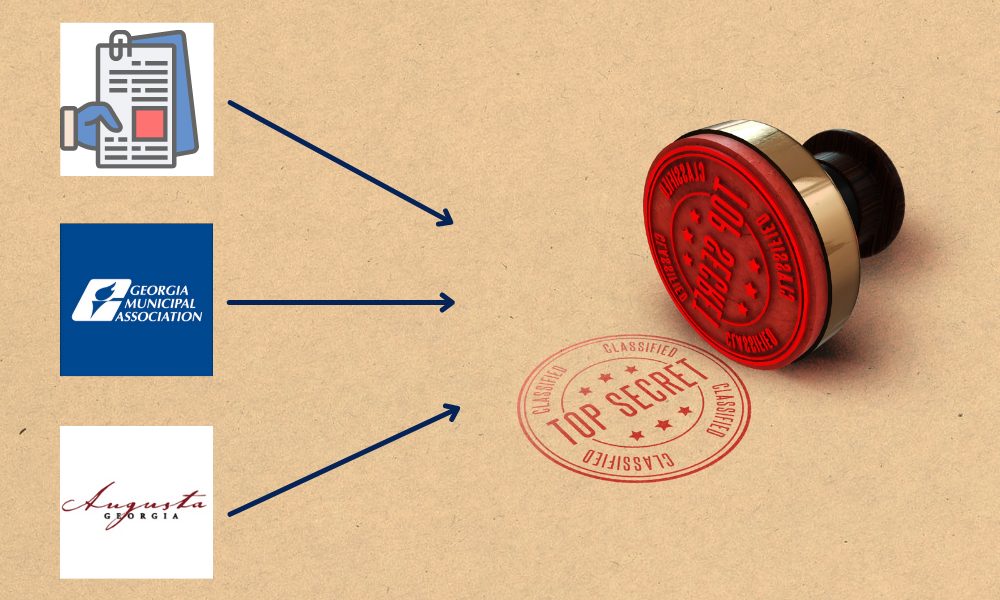 When the City of Augusta was sued by a handful of media entities over its purported violation of state law and refusal to release public records pertaining to a hiring decision, it was the taxpayer funded Georgia Municipal Association that stepped in to support the city’s quest for secrecy.

The Augusta Chronicle, Augusta Press, WJBF, and WRDW sued the City of Augusta recently because it released only one name on the list of individuals for city fire chief. Though only one was up for final consideration by the city commission, the media had an interest in examining the applicants who were second and third in line for consideration.

The City of Augusta made the argument that three was the maximum number of individuals that could be released in public records and that it complied with the law in releasing just one since it did not exceed the cap. To that end, the city also argued that it was protecting identities of applicants who have jobs in other cities and counties, so as to prevent any retaliation. You can read more about the specifics of the fire chief hiring process in Augusta here.

Despite the codified standard, the Georgia Municipal Association, a taxpayer funded lobbying organization that advocates for city officials, sided with the City of Augusta and filed a brief in support.

In the brief, GMA said:

If the phrase “as many as” in O.C.G.A. § 50-18-72(a)(11) were changed to mean “at least” or something analogous, what effects would this have on the hiring processes of local governments? Such a situation would leave many unanswered questions, namely: What would happen if there were not “at least” three applicants for the position? What if there were “at least” three applicants initially but several were quickly discounted as they did not meet the necessary criteria? Should the information of such discounted applicants be released to the public despite these applicants having no chance at being hired for the position, thereby making it known to their current employers that they applied for the position? Should the local government alert the discounted applicants to give them the option of removing themselves from consideration prior to their personal information being released? If local governments were mandated to release the personal information of “at least” three candidates, there are no good answers to the above questions.

Rather than potentially exposing themselves to a public “vetting” by the press, or potentially losing their current job, such possible candidates might well choose to instead apply for a private sector job where their candidacies are not made public. Applicants for executive head positions are not politicians, they are experts in their chosen profession.

The chilling effect the practice of disclosing records of applicants who are not actually under consideration for a high-profile job might have on local government hiring could lead to the best candidates looking elsewhere.

You can read the full brief here.

What the Law Says

O.C.G.A. 50-18-72(a)(11) provides for public release of the names and the corresponding documents of up to three individuals in the 14 days leading up to a hiring decision. “…all documents concerning as many as three persons under consideration whom the agency has determined to be the best qualified for the position shall be subject to inspection and copying,” the code section reads.

The purpose is to allow the press and the public the opportunity to review information about possible employees and department heads before any hiring decisions are made.

If an individual withdraws from being considered for the job any time prior to the 14-day window for public inspection, the city can exempt their name and application from release, but must release information pertaining to the next most qualified individual.

Superior Court Judge Jesse Stone, who served in the legislature when the Open Records Act was amended in 2012 and 2016, disagreed with the City of Augusta. In his order, he said that state open government laws “serve the important policy of bringing ‘sunshine’ to the process of governing,” which assists in educating citizens and holding public officials accountable. He emphasized that exceptions to the law are to be interpreted ‘narrowly.’

“Otherwise, the public will have no meaningful input into the selection of the city’s next fire chief. Without information, the citizenry cannot engage in effective discourse with their elected representatives about making this important decision.”

Stone also ordered the city to release all documentation for three candidates, as requested by the media entities.

Augusta City Commissioner John Clarke told The Augusta Chronicle on Wednesday that he believed the city would appeal Stone’s decision. On Thursday, the city filed a motion asking for Stone to reconsider and offer additional direction. That is expected to take place on Friday afternoon.

This is not the first time the Georgia Municipal Association has meddled in lawsuits involving cities in Georgia. In the summer of 2020, GMA supported the City of Atlanta’s suit against Governor Brian Kemp, again filing a brief in support, over the authority to instate mask mandates amid the pandemic.