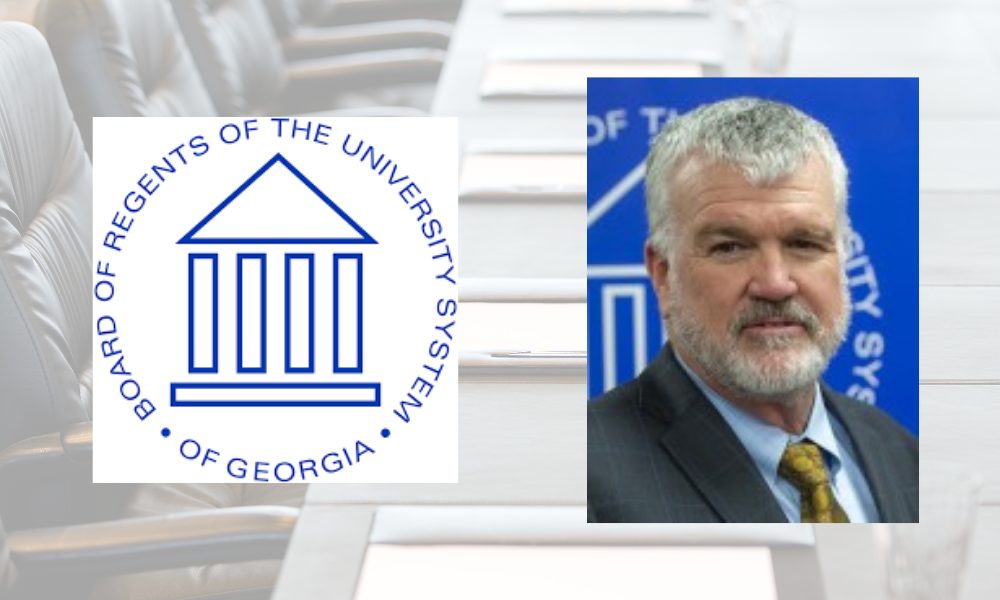 Reynolds will serve as Board chair from Jan. 1, 2022, through Dec. 31, 2022. Representing the 10th district on the Board of Regents since 2020, Reynolds is the Chief Executive Officer of the privately held BankSouth Holding Company headquartered in Greene County, Georgia. The company owns and operates BankSouth, BankSouth Mortgage headquartered in Atlanta, Coldwell Banker Lake Oconee Realty and other subsidiaries. He is a graduate of Georgia Tech where he earned his bachelor’s degree in Industrial Systems Engineering and has been inducted into the Council of Outstanding Young Engineering Alumni.

During the early 1980s, Reynolds was among the first developers of property near the newly impounded Lake Oconee. He was also General Manager of Greensboro Lumber Company, a local, innovative manufacturer of pine and hardwood timber products. The company operated a steam-powered electrical generating plant that was entirely fueled by waste and byproducts of milling and logging operations. The facility was one of the first in Georgia to export excess generation capacity to the electrical grid.

In 1987 through 1992, Reynolds was a founding partner, President and the Chief Operating Officer of Linger Longer Development Company. The company owned, developed and operated Reynolds Plantation, now known as Reynolds Lake Oconee. Reynolds served on Savannah-based Coastal Bankshares Board of Directors. He was a founder and director of Specialty Surgery Center Partners.

“It’s a privilege to serve the current and future students of Georgia’s public colleges and universities as we remain focused on our priorities and being good stewards of the resources we have,” Reynolds said. “As a graduate of Georgia Tech, one of the 26 outstanding institutions in this system, I am committed to making sure Georgia keeps its reputation for innovation and success in higher education.”

Reynolds is also past chairman of the State Board of Technical and Adult Education, now known as the Technical College System of Georgia, having served 13 years on that board after an appointment by Gov. Zell Miller. Reynolds and his wife, Lesley, reside on Lake Oconee. They have an adult daughter, Chandler, and a son, Jackson, attending Southern Methodist University.

Regent Hames will serve as vice chair of the Board from Jan. 1, 2022, to Dec. 31, 2022. Having joined the Board in 2018 as an at-large member, Hames is the Headmaster at Heritage Preparatory School, a classical Christian school in Atlanta. She previously served as the President of ReformEd, a law and consulting firm focused on improving educational opportunities and outcomes for children and students.

Prior to launching ReformEd, Hames served as Gov. Nathan Deal’s Deputy Chief of Staff and, prior to that, as Gov. Sonny Perdue’s Policy Director and Chief of Staff at the Georgia Department of Education. She started her career as a public school classroom teacher where she was named as her school’s First Year Teacher of the Year. She received her undergraduate degree from the University of Georgia College of Education and a law degree from Georgia State University College of Law. She also earned a Women’s Certificate from Southeastern Baptist Theological Seminary.

“I look forward to working with my colleagues on the Board and leaders across the system to ensure our focus remains on student success,” Hames said. “I appreciate the trust of the Board as we work together to ensure the USG is the best in the nation.”

Hames is a member of the State Bar of Georgia. She received the 2016 Professional Achievement Award from UGA’s College of Education, was a member of the 2013 40 Under 40 Class by the UGA’s Alumni Association and was selected as a 2010 Henry Toll Fellow by the Council of State Governments. She and her husband, Ben, natives of Clarksville, Georgia, live in Atlanta with their two children, Isaac and Rachel.