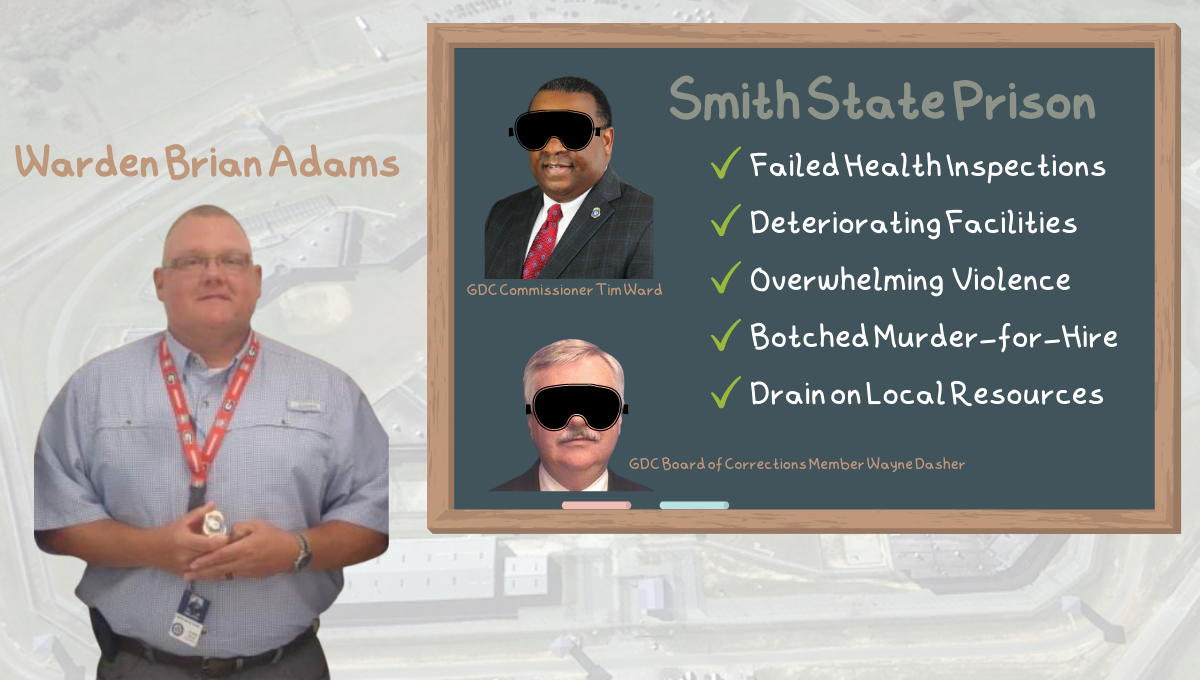 While the notorious Georgia State Prison and its inmates, came with a host of problems before the facility shuttered for good, Smith State Prison just down the road in Glennville, GA, has continued to operate with considerably less scrutiny despite its overwhelmingly obvious violence and out of control operations.

Georgia State Prison in Reidsville ‘closed’ for general operations in early 2022, though it is routinely used as a transfer hub for inmates coming and going from other jurisdictions. The 100-year-old prison once home to death row and the electric chair shuttered as the Georgia Department of Corrections announced it was contemplating building an even larger maximum security site in Tattnall County – to the tune of several hundred million dollars – which would return the number of prisons in the small, rural county to three.

But with everything taking place at the existing facilities in Tattnall County, can taxpayers really afford it? An examination of Smith State Prison in just the last three years says ‘no.’

Warden Brian Adams has served as the warden at Smith SP since October 2019. His lateral move to the facility followed a series of violent riots at the correctional institution, or ‘disturbances’ as they are referred to by the Department of Corrections, which resulted in a handful of deaths and several helicopter life flights out of the facility. His presence at the facility was supposed to bring a semblance of peace and order, but public records indicate his tenure has been full of everything but.

According to according to court records, charges against inmates since the arrival of Warden Adams include:

NOTE: The chart below is not the NUMBER of cases, but the number of each charge pending as some defendants may have more than one offense. (i.e – John Smith charged with Aggravated Assault, Contraband, and Gang Activity)

Also on Warden Adams’ watch in 2021 was a botched murder for hire plot which was orchestrated from his facility in an attempt to take out a GDC corrections officer. The plot to ‘eliminate’ a contraband-aggressive C.O. resulted in a hit on the wrong house and claimed the life of 88-year-old Bobby Kicklighter – the next door neighbor of the intended target. The GBI’s investigation into Kicklighter’s murder revealed another connected case in Jesup, where husband and father Jerry Lee Davis was murdered in his own home, allegedly by the same crowd.

Though, according to court testimony from GBI agents investigating the criminal enterprise, there is photographic and video evidence of inmates over several months time displaying designer clothing, cell phones, gold and diamond jewelry, drugs, and cash,– all of which are prohibited contraband items –  the operations of Smith SP have yet to be scrutinized, overhauled, or even questioned.

While Warden Adams approved the purchase of video game consoles and flat screen televisions as rewards for inmates, the Smith SP facility itself is seemingly overrun with pests, rodents, and filthy mold and mildew.

This is important to note, considering that, among the reasons listed for the closure of Georgia State Prison, deferred maintenance which would cost more to repair than rebuild topped the charts. But GDC seems to have learned little from GSP, as conditions at Smith State Prison have deteriorated drastically since Adams took the helm in October 2019.

Dating back to 2017, Smith State Prison consistently hovered in the ‘A’ score territory. Within 30 days of Adams taking over, the score dropped below an ‘A,’ and has declined in perpetuity. In May of this year, the facility failed its health inspection. DPH notified the facility that it would return in three days for reinspection, prompting the facility to remedy some of the issues, but many of the more severe issues remain.

The May 2022 failed health inspection reported eight violations, six of which were ‘repeat’ violations, according to DPH.

Among the repeat violations:

When DPH returned three days later for a re-inspection, the facility still lacked soap for handwashing, foods were not covered and stored at the correct temperatures, a water supply that could not be shut off was noted within the kitchen area, and while fly and roach activity had declined, ‘heavy rodent activity’ was still present.

The issue is seemingly one that will not be addressed, however. According to previous DPH reports:

You can read all of the Smith State Prison public health inspection reports from the Georgia Department of Health here.

Perplexing Silence from Board of Corrections Member Based in Glennville

With Tattnall County’s unique position as the only county in the state to have three prisons within its borders, presumably the county would reap some benefit from also having a Board of Corrections member for the 12th Congressional District as a resident of Tattnall County. But just the opposite is true.

Wayne Dasher of Glennville has served as a member of the Board of Corrections since 2004. The 71-year-old lacks any background in corrections, having spent his working life in banking. Dasher has been silent on the goings on inside Smith State Prison, or any of the Tattnall County prisons generally, and has failed to bring the matters up at any of the Board of Corrections meetings over the last 22-months since the murder of Bobby Kicklighter.

Dasher, however, has been a vocal advocate for the reduced water rates for GDC facilities provided at the expense of City of Glennville taxpayers. As such, for decades, the city of Glennville has provided water to Smith State Prison at a subsidized rate that is only made whole through taxation on city residents.