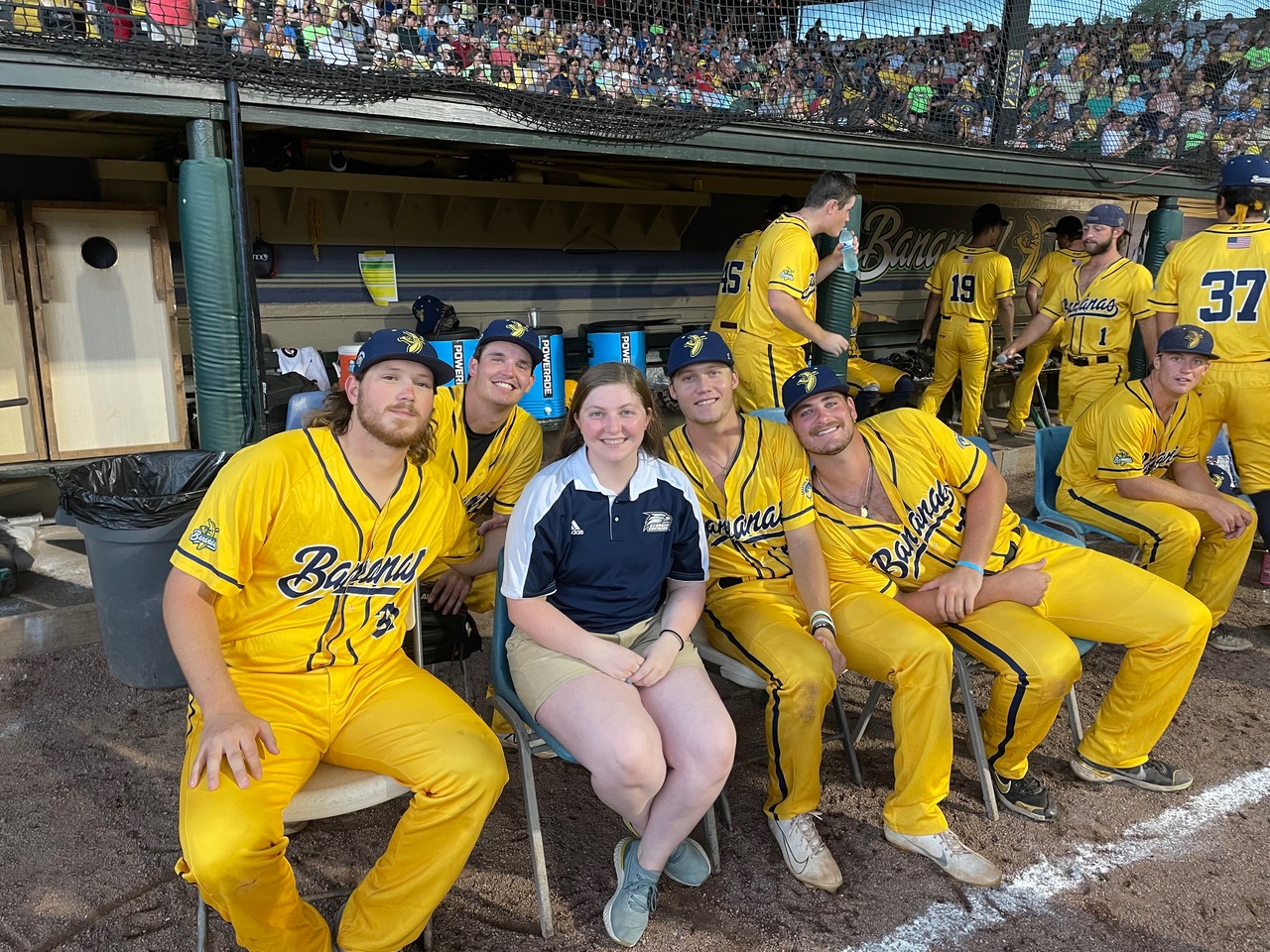 Over the summer, seven Georgia Southern athletic training graduate students have been helping the hometown Savannah Bananas. In addition to acquiring hands-on experiences with the local ball club, students are having the most fun summer with the most fun team in baseball.

“I have definitely been using it for bragging rights,” said Caitlyn Shoffer, one of the training students. “I’ll tell people I got to work with the Bananas and everyone immediately knows what I’m talking about, and they’re always so amazed and excited.”

Shoffer grew up in a sports family. Both of her parents were heavily involved in athletics, and that was passed on to Caitlyn, who was a high school cheerleader. However, she needed to have surgery following an injury during her senior year of high school.

While the injury ended her cheering career, she describes it as a “blessing in disguise.” The experience opened her eyes to a path that allowed her to stay in sports and help athletes avoid making the same injuries.

After graduating from Georgia Southern University with a degree in kinesiology, she returned to her alma mater to pursue a master’s degree in athletic training. That is how she connected with the Savannah Bananas.

Steve Patterson, Ed.D., is the athletic training program director for Georgia Southern University. He is also an athletic trainer for the Bananas and offered his students the opportunity to shadow him on the field.

“I can teach them all kinds of different scenarios in class, but I can’t recreate how students respond to emergencies,” said Patterson. “I value the fact that we put such an emphasis on it so that the students come out and they’re ready to handle pretty much any situation.”

Shoffer, who’s heading into her first year in the master’s program, said this impactful experience wasn’t just a fun way to get to see a popular baseball team but it also boosted her confidence in her skills and choices.

After observing the respect the players and organization have for Patterson, Shoffer said she’s looking for more opportunities for baseball clubs down the road.

“I never really had considered working baseball, honestly,” she said. “But I loved seeing how the baseball guys interacted with each other and how much they cared about the game and they cared about everyone around them. Getting to actually meet the guys and being a part of baseball made me really consider that maybe this is what I want to do now.”

The athletic training program is continuing to grow, which also helps it expand its impact on the community. In addition to working with the Bananas, students are also assisting local school districts and will be working with the newly formed ECHL hockey team, The Savannah Ghost Pirates.

The master’s program is intentionally designed to accommodate students with different majors, including exercise science and rehabilitation sciences. It’s structured in a way where students have already fulfilled many of the prerequisites before entering the program. Those prerequisites and more information about joining the program can be found here.

This is a press release from Georgia Southern University.