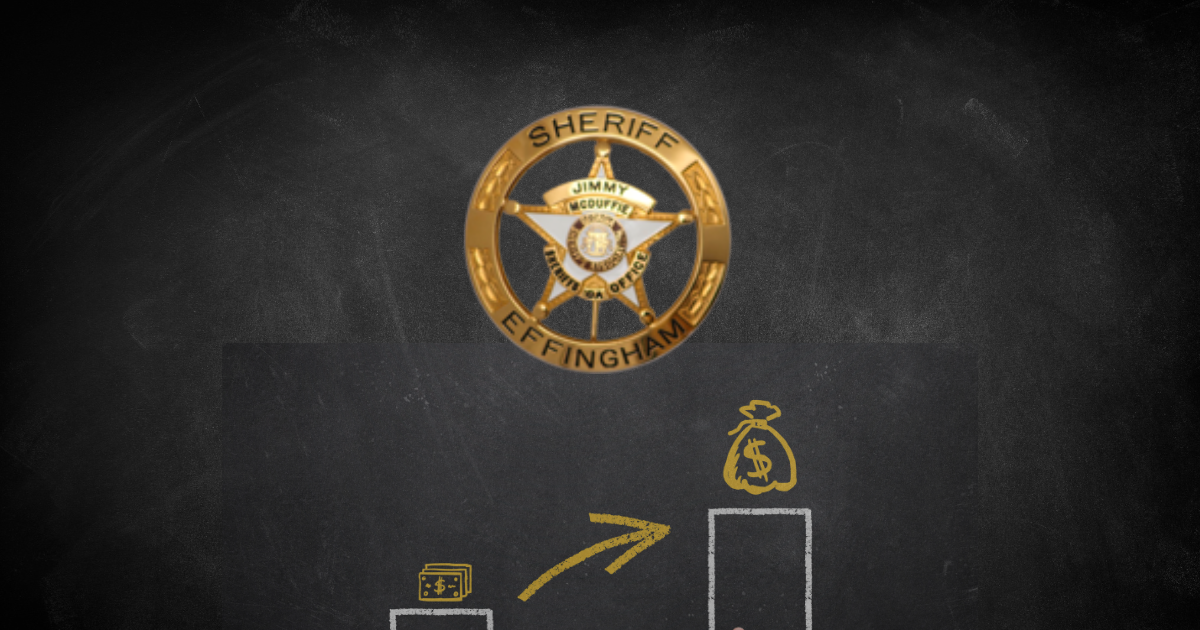 The revised FY 2023 budget for Effingham County includes across the board pay increases for all Sheriff’s Office employees.

The revision comes as part of the second reading of the FY 2023 budget set to begin on July 1. The 11th hour pay increase follows the continued departure of employees of the Effingham County Sheriff’s Office, most of whom have left for higher pay at other agencies. In April 2022, ECSO Chief Deputy Richard Bush told attendees of the “State of the County” address that the office was down thirty employees. Those dire numbers, however, were not enough to prompt changes in the initial draft of the upcoming year’s budget and no action was taken to make the jobs ‘more attractive.’

But with ten days remaining before the start of the next budget year and a shortage of even more deputies, commissioners now plan to appropriate additional funding to add $3.00 per hour onto the pay rate of each Sheriff’s Office employee.

With $91,119,151 million in ‘governmental funds’ reserves, of which $30,086,735 is unrestricted cash for county operations, and enough to set aside $6 million for ‘economic stabilization and another $4 million for a capital contribution toward the multi-county joint IDA project, it begs the question of why such a decision wasn’t made before the county lost so much of its workforce.

With 482 square miles of county to patrol, Effingham County has long been at the bottom of the barrel in paying their law enforcement personnel, particularly as it relates to population, county size, and tax base. As the tax digest has grown and the county collected more money, salaries have largely remained stagnant.

The starting pay at the Effingham County Sheriff’s Office is currently $19.63 per hour, well below what smaller municipalities with much more limited budgets, like Rincon and Garden City, are paying officers. The $19.63 rate equates to $1,648.92 every two weeks, or $42,871.92 annually, before taxes. The pay is hardly attractive in a county where the median monthly rent is $1,009 and the median monthly mortgage is $1,402.

The $19.63 starting pay is one that only recently took effect, following a $18,500 Salary Compensation Study commissioned by the Board of Commissioners in November 2020. That study, however, made no considerations for the distinction between first responders and typical county employees with forty-hour work weeks. The recommendations of that study have been implemented in two phases, which exacerbated pay compression issues within departments and failed to resolve issues related to tenure and longevity with the county.

The $3.00 per hour increase, however, will set starting pay for Sheriff’s Office deputies at $$22.63 per hour and some existing employees will still see a bump from Phase II of the pay study recommendations, effective July 1, 2022.

Effingham is also one of the only counties in the area which does not pay the Peace Officers’ Annuity and Benefit Fund of Georgia dues for its employees. The POAB Fund is a supplemental retirement plan for Georgia peace officers which is, in most places, considered an additional ‘benefit’ of employment.

The proposed FY 2023 budget for Effingham County is currently $45,442,304, not including SPLOST spending and other special fund projects.

Personnel increases are largely due to the implementation of stage two of the county’s compensation study and makes no account for raises otherwise. There is no cost of living adjustment (COLA) appropriated in the FY 2023.

Revenues are projected to increase at the same rate as expenditures – 10.58%. The budget accounts for a decrease in functional revenues (3.27%) and a 55% decrease in “other revenues,” but a 10.67% increase in property tax collections

Like nearly everywhere else, Effingham County anticipates collecting more taxes in the upcoming year due to property assessment increases. Even with a rollback, Effingham County is budgeting for property tax and TAVT revenue of $22,849,172 in the upcoming fiscal year. The county also accounts for functional revenue of $7,312,358, LOST revenue of $10,697,828; and other general revenues of $4,582,945 which includes using $2,872,133 of fund balance (or reserves) for capital expenditures.

Capital expenditures paid for by various General Funds, SPLOST funds, Water & Sewer, and other similar accounts budget $80,166,646 in projects out of a requested $102,799,817 from county departments.

The county reports that $11,615,462 of these projects will be paid for with American Rescue Plan Act funding.

Additionally, property taxes are collected on the calendar year schedule while the county budgets on a fiscal year which runs from July 1 to June 30.

Commissioners will meet on Tuesday, June 21, 2022 at 5:00 p.m.. To view other agenda items scheduled for discussion, view the agenda.
View the complete FY 2023 budget here.