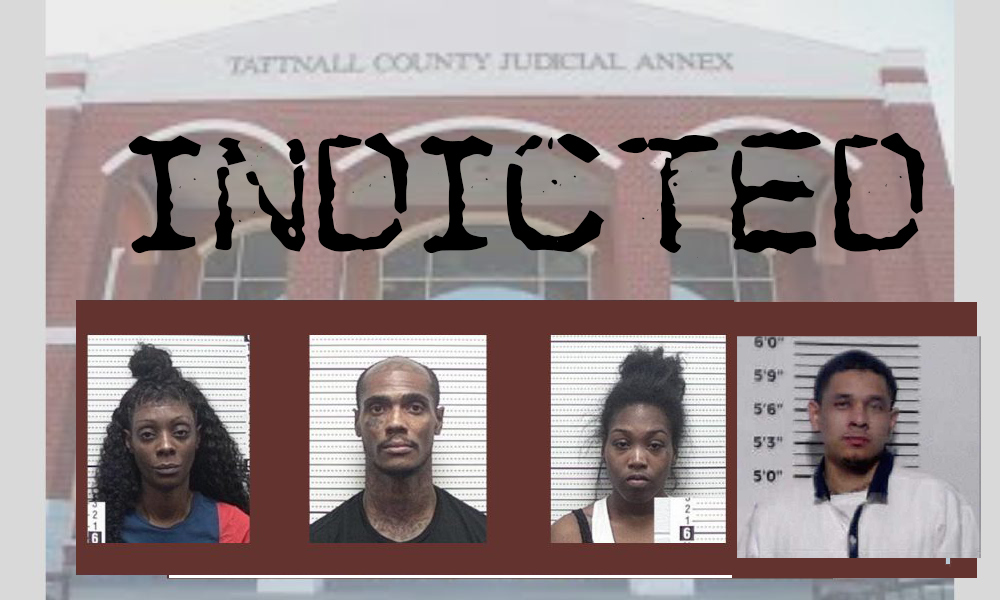 A lengthy indictment was returned Monday for the man charged in the botched murder-for-hire plot that targeted a corrections officer and claimed the life of an innocent 88-year-old man.

A Tattnall County Grand Jury returned a true bill of indictment Monday for Christopher Reginald Sumlin on a host of charges related to Sumlin’s alleged acts, including a multimillion contraband scheme operating from inside Smith State Prison in Glennville. That scheme, GBI agents said last fall, spanned much further than the acts of violence for which Sumlin and his co-defendants were initially accused.

Sumlin and three others were charged in July 2021 for the murder of Bobby Kicklighter, an elderly man who was killed while he slept in a hit intended for his neighbor, a correctional officer at Smith SP.

Shortly after, Sumlin was charged with the murder of Jerry Lee Davis of Wayne County. Davis was an employee with a private vendor contracted at Smith State Prison and was brutally murdered in his home with his wife and three children present. Sumlin was also said to be responsible for an attempted carjacking in Hinesville, the victim there reportedly a corrections employee as well.

The GBI case agent on the Tattnall County case, SA Christian Johnson, said in a hearing in September that the investigation revealed much of the scheme was organized from behind the walls of a state prison. There, inmates dressed in designer clothing and diamond and gold jewelry, possessed cell phones with internet access, among other things, allowing them to research and orchestrate the entire plan.

Nathan Weekes, Aerial Murphy, and Keisha Jones were all indicted one count of Malice Murder, three counts of Felony Murder, one count of Burglary in the 1st Degree, one count of Aggravated Assault, one count of Possession of a Firearm by a Convicted Felon, and Conspiracy to Commit Murder.

Jones and Weekes were also charged, like Sumlin, with one count of Conspiracy to Violate the Racketeer Influenced and Corrupt Organizations Act (Georgia RICO Act”).

Jones and Murphy, like Sumlin, were charged with one count of Possession of a Firearm During the Commission of a Felony. Weekes could not be charged with such as he was an inmate at Smith State Prison at the time of the incidents.

The indictment lists an “Yves Saint Laurent Squad” as a group of individuals associated for the purpose of profiting from the smuggling of contraband into Smith State Prison and using violence to further and protect the enterprise’s activities.

“In videos filmed inside Smith State Prison with contraband cell phones and posted on social media, Nathan Weekes, the President of the Squad declared the motto of the Yves Saint Laurent Squad: “Shit don’t stop cuz the motherf***ing door lock.”

The enterprise utilized Cash App, Venmo, Western Union, cryptocurrency, and US currency to purchase contraband, bribe guards, and finance murder and other crimes of violence to protect other inmates for profit.

The indictment continues “In some circumstances, inmates use those contraband cell phones to talk with corrupt GDC staff, whom the inmates have cajoled, bribed, or intimidated, to facilitate the smuggling of additional contraband into the prison system.”

Nathan Weekes utilized girlfriends and associates on the outside to help his contraband ring, in addition to bribing and intimidating corrections officers into joining in the activities. “There are still co-conspirators unknown to law enforcement and the grand jury at this time,” the indictment reads.

Jessica Gerling AKA “The Queen” or “The Star” AKA “The First Lady” was employed by GDC at Smith State Prison. She was romantically involved with Weekes and assisted with the contraband ring and was subsequently terminated by GDC. She was charged by CID but murdered before her case was adjudicated.

Ireon Moore was employed at Smith State Prison before she was terminated for bringing contraband into the facility for the YSL Squad. She was also involved with Devion Waller, according to the indictment, and has been charged criminally.

Part II of the indictment outlines twelve overt and predicate acts of racketeering activity by all of the parties, and then some, to include smuggling drugs, drone drops of drugs, evidence tampering, the murder of Jerry Lee Davis in Wayne County, use of cell phones from inside prisons for the racketeering acts, the solicitation of guards to bring in more than $29,000 into the prison, threats against the life and safety of correctional officers, and other acts of violence.

Jessica Gerling was shot and killed in Long County in June 2021.

A GDC employee who was named in the indictment but omitted for the purposes of this report, who was chased and shot in Liberty County in March 2021.

The indictment also refers to the Criminal Investigations Division charged with investigating corruption among guards and staff as stuck in a cycle of “whack-a-mole.”

Though the information on the investigation has been slow to trickle out, it has largely been irrefutable. Nevertheless, the Georgia Department of Corrections, Commissioner Timothy Ward, the Board of Corrections, the BOC Representative for the 12th District (Wayne Dasher), and the warden have all been silent on the contraband, the scheme, and the murders.

Now that an indictment has been returned, the case will track for jury trial. Prosecutors previously announced their intention to seek the death penalty.