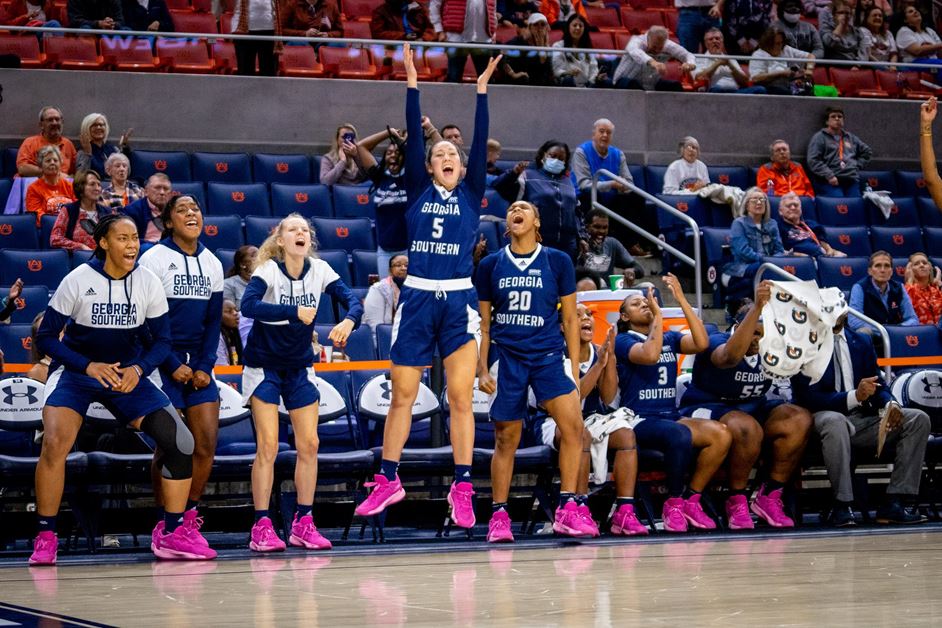 Georgia Southern opened up the 2021-22 season by knocking off an SEC opponent for the first time since 2005, defeating Auburn by a 68-66 score on Thursday evening at Auburn Arena.

The Eagles (1-0) ended a five-game losing skid to the Tigers (0-1), defeating Auburn for the first time since 1977. It was Auburn’s first loss to a Sun Belt Conference team since 1985, snapping a streak of 47 straight wins against the league.

Georgia Southern made the first two baskets of the game, taking a 5-0 lead on a three-pointer by Eden Johnson and a bucket by Mya Burns. The Eagles held the Tigers to just 17 percent shooting from the floor in the first period, taking a 13-9 lead after the quarter.

In the second quarter, a three-pointer by Annie Hughes put the Tigers in front, 22-20, but the Eagles scored the final three points of the period to take a 31-29 lead at halftime.

Georgia Southern led by as many as six in the third quarter, 39-33, but the home team closed to within one, 44-43, right before the end of the quarter on a Sania Wells jumper.

The end of the game came down to the final minute as a three-pointer by Aicha Coulibaly made the score 63-60 in favor of Auburn, but Ja’nya Love-Hill drove in for a layup, and a turnover on the inbounds pass resulted a layup by Marks to put the Eagles back in front. The Eagles were able to work the clock down to 10 seconds, and Daeja Holmes’ pair of free throws sealed the victory.

Eagle of the Game
Johnson registered her first double-double as an Eagle with 10 points and a game-high 13 rebounds. She also blocked four shots and nabbed three steals. Georgia Southern blocked 10 shots tonight, the first time the Eagles have been in double digit blocks since 2012.

Stat of the Game
Georgia Southern improved to 4-3 when opening up the season against SEC foes. The Eagles defeated Georgia to open up the 1976-77 and 1977-78 seasons and also downed Florida in the 1987-88 season opener.

Redshirt sophomore Eden Johnson on what this win means to the team
“It means everything to us. It’s what we’ve been working on ever since last season. We knew we had to turn it around and we did.”

Johnson on the key to the victory tonight over the Eagles
“The biggest key was our composure. We had to look like it was a practice, playing against each other, and we did that.”

Head Coach Anita Howard on the season-opening win over the Eagles
“I’m in awe. I knew it was going to be tough. The crowd was phenomenal, and not just for Auburn, we had fans here too. This win does set a tone, but at the end of the day it’s all about consistency. As excited as I am about this huge win, we can’t settle for this. I think there’s some even stronger opponents in our future, that we can’t let this win define us. We’ve just begun.”

Next Up
The Eagles will take on Fort Valley State in the 2021-22 home opener for Georgia Southern on Saturday, November 13, at 1 p.m. at Hanner Fieldhouse.