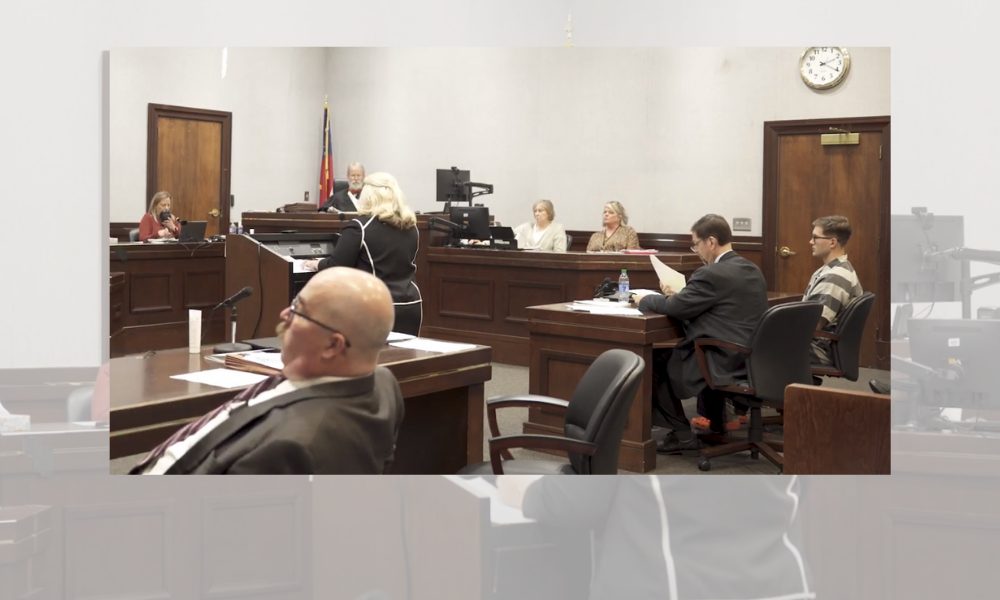 Grant Spencer appeared in Bulloch County Superior Court Monday afternoon to ask Judge Gates Peed to make adjustments to his sentence ordered in the death of Michael Gatto back in 2014. Spencer has been incarcerated in the state correctional system since 2016.

Spencer, who is now 27 years-old, was transported to Bulloch County for Monday’s hearing where he appeared with his attorney, Matt Hube, to ask for a sentence revision under the Youthful Offender Act. The YOA is for male individuals who were between 17 and 25 years of age and were convicted of a felony offense for which the maximum punishment did not include death or life imprisonment. The program is through the Department of Corrections and is limited to individuals who “have the potential and desire for rehabilitation” with the idea of offenders having skills upon release back after incarceration. Spencer, who was 20 years old at the time of the incident, is an ideal candidate for the program, Hube said.

Seven years ago, Grant Spencer was working as a bouncer at Rude Rudy’s in Statesboro. A bartender reportedly informed him that 18-year-old Michael Gatto was stealing money from the tip jar, prompting Spencer to remove Gatto from the bar. Both Gatto and Spencer had been drinking at the time and a tussle ensued and Spencer ultimately struck Gatto five times in the head/face, at which point Gatto was unconscious. According to reports from 2014, Spencer then pulled Gatto outside where he was found by emergency personnel. He was airlifted to a hospital in Savannah where he died.

Spencer was charged with felony murder and aggravated battery by ADA Daphne Totten, but pled guilty to voluntary manslaughter. He was sentenced to 20 years in prison and must serve 13 before he will be eligible for parole. For the last five years, Spencer has been incarcerated and he received credit for time served from the time of the incident in August 2014 to the time of the plea in August 2016 for an approximate total of seven years.

Arguments Made by the Defense

“We’re not here to ask that you reduce his sentence, give him lenient treatment, let him out earlier, put him in a better position for parole. We’re not asking for any of those things. I also want to be clear that Grant has been punished and he continues to be punished and, quite frankly, in talking to him…he’ll be punished for the rest of his life,” Statesboro defense attorney Matt Hube said ahead of his arguments in favor of the sentence alterations. He said Spencer thinks about the case every single day, every single hour, and that will not change, regardless of whether or not he is incarcerated.

Hube shared details with the Court about Spencer’s experience in prison thus far, including his growth personally and the avoidance of alliances with gangs and others participating in nefarious behavior behind bars. He also referenced the lengthy list of educational accomplishments Spencer has achieved over the last five years, including a number of certificates and a Bachelor’s degree. Spencer also teaches a class on investments to other inmates and works in the metal shop making furniture for prisons across the state. (More details on certificates in article on initial Motion filed)

“The only thing he has left that he can do with regards to programs is to complete a welding program,” Hube said, explaining the five-month course that is available. “After that, he’s done. There’s nothing else available to him in the Department of Corrections at this point that he can take advantage of…except be resentenced under the Georgia Youthful Offender Act, where there may be some additional doors opened for him with regards to programs, training, those types of things that he could be involved in.”

Hube referenced the GDC Firefighter program and others that are only afforded to those who are sentenced as youthful offenders.

He then spent time preemptively refuting claims made in the State’s motion in opposition filed ahead of the hearing. Hube stated that the court does have the authority to resentence Spencer because it does not impact the term of the sentence or his eligibility for parole.

“The fact is that Grant Spencer is going to get out of prison. Some people in this room don’t like that idea, probably. Some people in this room can’t wait for that day to get here. But it’s going to happen. It is an eventuality and it’s a certainty. So if we understand that and we know that Grant Spencer is going to be living among the rest of us, why wouldn’t we want him to be able to take advantage of every opportunity that’s going to potentially result in him being able to make that transition in a more successful way? Why would we not want that? Isn’t that what we ultimately want? Commit a crime, get punished, serve your punishment, you re-enter society and you contribute. And you live amongst the rest of us and you don’t cause mayhem.”

Arguments Made by the State

Totten opened by telling the court that the negotiated plea back in 2016 was based on negotiations between the State, the defense attorneys, and the Gatto family and it was entered in Judge William Woodrum’s court. “At no point prior to us appearing that day had the Youthful Offender Act ever been part of our discussions.” She explained she was approached by one of the defense attorneys, David Wolfe, prior to the sentencing hearing then, asking if there was opposition to Youthful Offender Act sentencing, which she affirmed. “We were beside ourselves…In my eighteen years, it’s not something we ever use or that has been used in a murder case.”

She also said Spencer could subsequently be eligible for parole earlier than year thirteen, as initially sentenced. She said that possibility along with the fact that it was not part of the initial plea agreement, the State opposed the resentencing.

“We’re now over six years past the actual sentencing and we would take the position that there is nothing in the law at this point that would allow the court to modify the sentence…this would be a modification of the sentence and it would, if the parole board, were to look at him in the program, it would result in him being paroled much earlier,” Totten told the court.

She then went on to discuss testimony and evidence the State would have presented had the case gone to trial six years ago and argued that the information Spencer was given on the night in question, prompting the confrontation between him and Gatto, was not accurate.

Totten then deferred to Gatto’s mother, Katherine Gatto, to share her feelings about the potential resentencing, saying the plea entered previously was done compassionately and with the ‘blessing’ of their family.

“It is ‘traumatizing’ to be back in the same courtroom again, in the presence of my son’s murderer, asking again for justice for Michael.” She went on to say that she opposed the request by Spencer because her son will not be afforded those opportunities. “An additional reward would be an insult to my family,” she told the court.

Totten then offered 186 pages of statements from 2014 and offered to hook up a laptop to show the video of the assault to assist Peed in making a decision. The defense objected to the video being shown, saying it was not relevant to the Motion filed. “We’re not here to re-try the case,” Hube said.

Peed overruled the objection, but said he would view the view if he saw necessary.

The defense briefly addressed the court again before the hearing ended to state that the State’s position in opposition was ‘punitive.’ He smacked down the State’s reference to early parole as a result of this resentencing and clarified for the court that anyone sentenced to twenty or more years is eligible under the law after six and a half years.

“Grant became eligible for parole in 2021. He’s got paperwork at Walker State Prison that says that. The code sections under YOA specifically state this doesn’t affect the parole calculation or analysis. Specifically stated,” Hube said. “All this is about is giving Grant Spencer, if the Department of Corrections sees fit, some additional opportunities for programs he would otherwise not have the opportunity to take advantage of.”

Peed did not make a ruling after hearing arguments Monday and will enter an Order on the matter at a later time. In the event that he grants the defense’s request, Spencer will not automatically enter the YOA program. Ultimately the decision will be up to the Georgia Department of Corrections, but GDC cannot make such a decision unless Spencer is resentenced.

Check back to TheGeorgiaVirtue.com for updates.