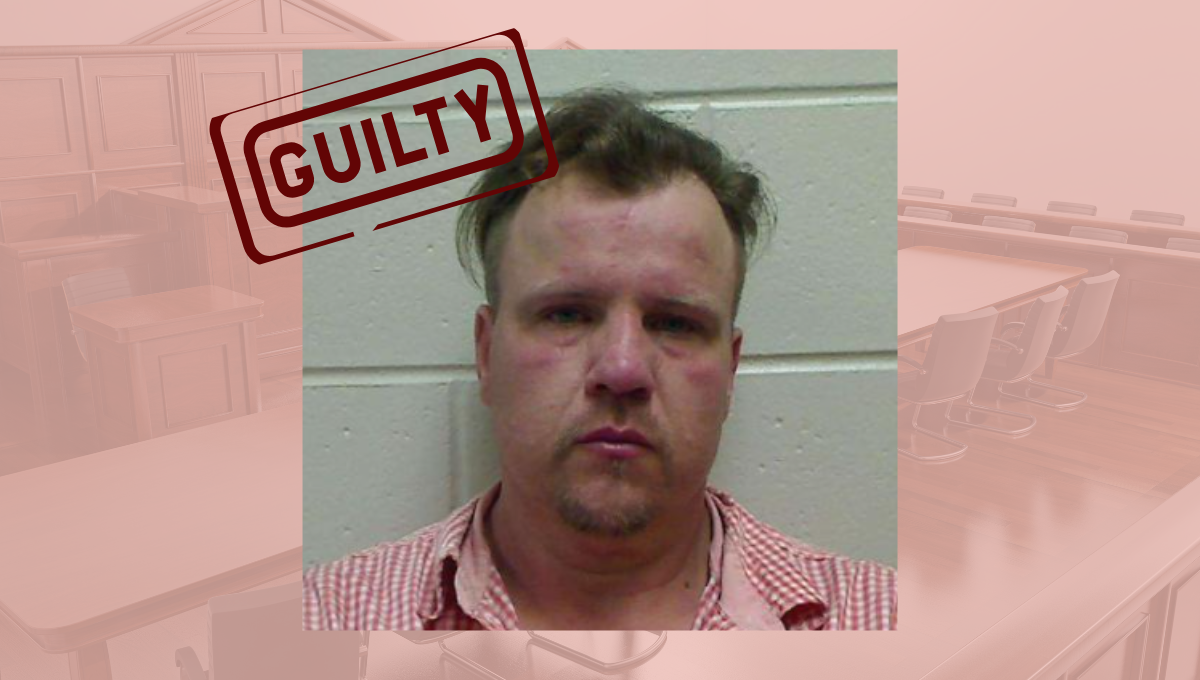 Initials are used to identify the victim in this article out of respect for the privacy of her and her minor children.

A Bulloch County jury found a Brooklet man guilty of Aggravated Assault this week in a case that garnered attention after two parties were charged as the primary aggressor.

The case stems from an incident in May 2020 involving Robert James Littleton, Lloyd Fortier, and JF. BCSO deputies had served Littleton with Criminal Trespass warnings in January 2020 because of an incident with Littleton and JF’s father. As a result, Littleton was barred from entering onto the Fortier property.

On the date in question, Bulloch County Sheriff’s deputies responded to an incident at the Fortier home after Littleton reportedly showed up, unannounced, in hopes of picking up a daughter he shared with his ex-wife, JF.

Lloyd Fortier, his wife JF, and JF’s mother, Tabitha Hanks, told law enforcement on May 20, 2020 that Littleton parked his car on the shoulder of the road in front of the home. JF exited the house and approached the vehicle to knock on the window in hopes of talking with Littleton about the children and some reportedly inappropriate messages sent by Littleton to JF.

Hanks called 911 and deputies responded to the scene to take a report.

During the same time, Littleton drove himself to East Georgia Regional Medical Center. He had been struck in the leg by the bullet after a ricochet off the ground. Gunshot wounds prompt mandatory response by law enforcement and BCSO deputies responded to take a report from Littleton at EGRMC.

Upon realizing the incidents were related, deputies with the Bulloch County Sheriff’s Office launched a more in-depth investigation and investigators ultimately arrested both Fortier and Littleton for their roles in the incident.

Fortier served 21 days in jail before he was granted a bond. His attorney argued Fortier should be immune from prosecution because he was defending his wife against a threat.

18 months after his arrest, the case against Fortier was dead docketed, but not dismissed, by the District Attorney’s Office. According to the Order signed by DA Daphne Totten and Judge Michael Muldrew, it was “appropriate and in the interests of justice for the State of Georgia to suspend its prosecution of the Defendant on the above charges until such a time as the matter in [Littleton’s case number] is resolved.” The order implies that if Littleton was found ‘not guilty,’ the state would then pursue the prosecution of Fortier.

The case of State v. Robert Littleton was tried by Assistant District Attorney Leland McElveen before Judge Michael Muldrew. Public defenders Renatta Newbill-Jallow and Elise Miller represented Littleton. The trial itself lasted only three-quarters of the day Thursday, as both the state and the defense shared several common points about how the incident at hand unfolded more than two years prior.

McElveen’s presentation for the state painted a picture of Robert James Littleton as an angry former spouse with a history of violence. JF testified about a 2015 incident in Screven County during which Littleton removed the girls from school and refused to let them see JF for more than a week. Littleton, JF said, agreed to give the girls back if JF came to his home alone for the exchange. JF instead brought a friend for her own protection and the incident escalated to a confrontation where Littleton pushed JF to the ground and left her with several bruises. JF then described the incident from May 2020, at which time she told jurors that she believed Littleton was going to hit her with the bat.

On cross examination, Newbill-Jallow pressed JF on why she didn’t retreat further, but JF said she had her hands in front of her face, but didn’t have much reaction time otherwise because the events unfolded so quickly. The contentious line of questioning also included Newbill-Jallow asking JF why she didn’t block him, whether or not she started the confrontation with Littleton, and why her mother called the police instead of her.

Both JF’s mother, Tabitha Hanks, and Lloyd Fortier testified to the court about what unfolded on May 20, 2020 before jurors heard from BCSO Deputy Rhett Kelley and BCSO Investigator Jonathan Fadden.

Kelley’s testimony was particularly noteworthy, as he was the deputy to serve Littleton with the Criminal Trespass notice a few months earlier. He testified that Littleton would routinely call the Sheriff’s Office to conduct welfare checks on JF and his minor children. Kelley said that being unable to reach them by phone for a short period of time would result in a welfare check request and that Littleton’s frequent use of such bordered the line of harassment.

Jurors also heard from Investigator Fadden who detailed his investigation of both the Littleton case and the Fortier case. Fadden testified that he charged both parties because both used a weapon for serious bodily injury.

Newbill-Jallow called two BCSO deputies, Hunter Oglesby – who responded to EGRMC – and Paul Morris – who was among the first on the scene at the Fortiers. Each testified for less than five minutes.

The defense then recalled Lloyd Fortier to the stand. Fortier was asked how, and why his case was dead docketed. He said that he was unsure of the exact meaning of ‘dead docket,’ but that he assumed it was dead docketed because “they don’t have a case against me because I was defending my wife.” Newbill-Jallow then asked Fortier who his attorney was and the last time he spoke with said attorney, but after an objection from the state, the questioning of Fortier ceased altogether.

Littleton ultimately opted to invoke his 5th Amendment right and did not testify.

While jurors were excused from the courtroom, attorneys discussed the applicability of lesser included offenses.

Newbill-Jallow asked the court to allow jurors to consider the charge of Simple Assault, a misdemeanor, as well. McElveen offered no objection, saying it would not be proper to oppose the defense’s request.

The addition of the lesser included offenses meant jurors would be given the opportunity to find Littleton:

Jurors would not, however, be able to find Littleton ‘guilty’ of both Aggravated Assault and Simple Assault for the same act.

Newbill-Jallow’s closing statement to jurors relied heavily on discrediting the witnesses. She asserted that the testimony of the victim, Lloyd Fortier, and Tabitha Hanks was different than it was in their written statements to police in 2020. “The state wants you to ignore evidence and statements made immediately after the event. If she had bruises in 2015, why would she go talk to him on the date of the incident? Because she wasn’t afraid. She never ran. She knew he wasn’t swinging a bat.”

Newbill-Jallow lamented that the state”s case “didn’t make sense.” She contended that Lloyd Fortier realized he was going to be charged and subsequently made a story up to help his own case. She closed by saying that the victim provoked Littleton and that she was angry with him when she knocked on the vehicle window.

“I’m asking that you return a verdict of ‘not guilty’ of Aggravated Assault,” she said before explaining that jurors would also have the opportunity to find Littleton guilty of Simple Assault if they believed he placed the victim in reasonable apprehension of serious bodily injury.

McElveen, on the other hand, told jurors they needed to determine the facts and apply the law. He urged them to ‘search for the truth, not find the doubt.’ He also urged jurors to remember that Aggravated Assault does not require contact and ‘intent’ did not mean that Littleton intended to violate the law – only that he intended to commit the act.

“If you believe one witness, the evidence is sufficient.” McElveen rehashed the evidence presented to jurors which outlined ‘Misery Loves Company,’ and that Littleton had a history of being irate and aggressive since at least the marriage separation. He displayed a picture of a $100 bill as a puzzle, missing a few of the ‘pieces.’ “It’s missing pieces,” he told the jurors, but you still know what it is. You can see the full picture.”

Littleton shook his head for most of the state’s closing argument.

Muldrew charged the jury and they retreated to the deliberation room just after 3:00 p.m. on Thursday afternoon. A half hour later, they announced they had a question about the definitions of Aggravated Assault and Simple Assault. Muldrew brought them back to the courtroom for clarification and deliberations promptly resumed. However, at 5:15 p.m., the Court summoned them to the courtroom for an update. The jury foreman announced that they were not close to a verdicted and wished to be released for the day.

They returned Friday morning and began deliberating again shortly after 9:00 a.m. After just under twenty minutes of deliberations, jurors announced they had reached a verdict – Guilty on the charge of Aggravated Assault. Littleton shook his head as the clerk read the verdict aloud.

Newbill-Jallow asked that the jury be polled and all jurors attested that each made their decision freely and willingly.

Muldrew thanked the jury for their service and then ordered a pre-sentencing investigation through probation. He scheduled a sentencing hearing for Monday, September 12.

Littleton was not released due to additional pending charges in Bulloch County Superior Court. Back in August 2021, Littleton was charged with Intimidation or Injury of a Grand or Petit Juror or Court Officer after he reportedly made threats of harm against a Bulloch County Superior Court Judge and a courthouse deputy  He’s remained in the Bulloch County Jail ever since. At the time of publishing, it was not clear when the court would proceed on the other case. He’s also requested a jury trial in a proceeding in which he is accused of violating a Family Violence Protective Order.

IRS waives penalties for 2019 and 2020 late filers, will issue refunds for those who already paid