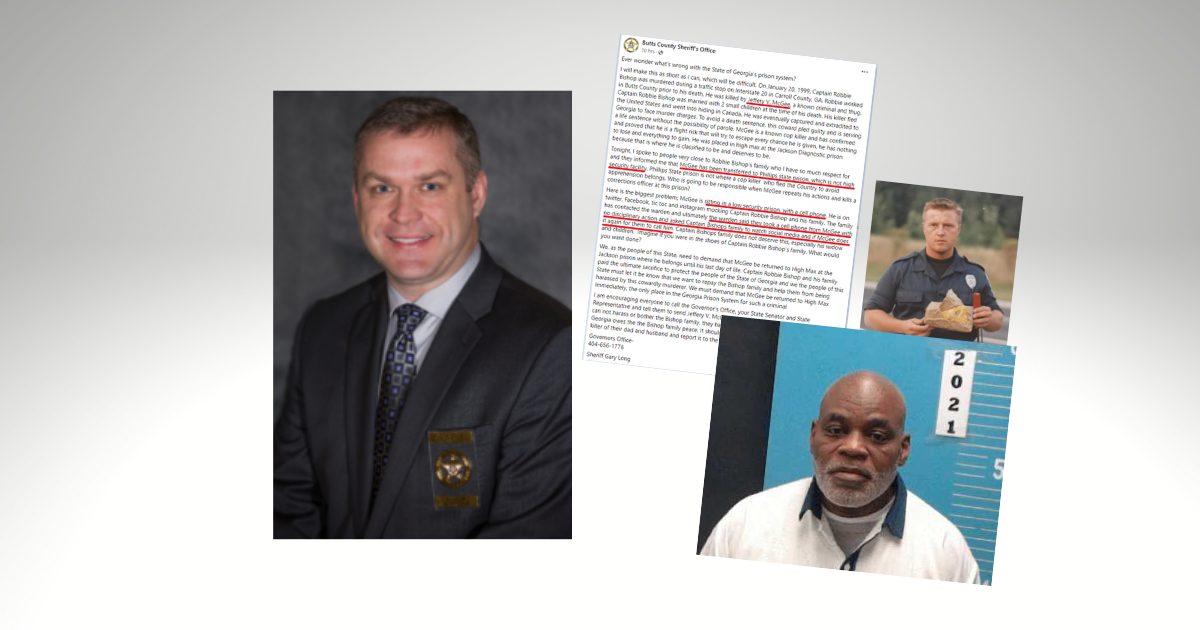 In a recent social media post, one Georgia Sheriff blasts the Dept of Corrections over one inmate’s transfer to a facility with a lower security level and the use of contraband behind bars.

Butts County Sheriff Gary Long took to social media Friday evening to lambast the agency after social media posts surfaced from a man convicted of killing a Captain with the Carroll County Sheriff’s Office. Specifically, the convicted murderer made posts from his prison cell regarding the late Captain’s family.

35-year-old Captain Robbie Bishop died during a traffic stop on I-20 in 1999. Investigators identified Jeffrey Vincent McGee as the one responsible for Bishop’s death. Responding deputies located a copy of a warning ticket written to McGee in Bishop’s ticket book. McGee fled the United States and was later captured in Toronto, Canada. Authorities extradited him to Georgia to stand trial for murder, though he ultimately accepted a plea to avoid a trial. A judge sentenced McGee to life in prison without the possibility of parole.

After his conviction, McGee was housed at Georgia Diagnostic and Classification State Prison in Jackson. The facility is a maximum security with death row inmates and some of the most dangerous convicted offenders. McGee’s recent transfer out of Jackson is the root of the issue for the Butts County Sheriff.

McGee, indeed, resides at Phillips State Prison in Buford, according to the Georgia Department of Corrections. The state website lists the facility as “medium security.”

Phillips State Prison’s capacity tops 918 inmates with 10 work details. Those details work outside the prison in cities and counties in the area. The GDC website also says Phillips is suitable for:

“inmates who have had management problems at other prisons or centers and those who could pose a risk if housed elsewhere. Provides all levels of Mental Health service to include Level IV, Crisis Stabilization. Host facility Atlanta Medical Center and Phillips Transitional Center.”

GDC is no stranger to contraband issues. In the last year:

Commissioner Timothy Ward has offered very little comment on the agency’s growing contraband problem. One exception involved his recent testimony before Georgia lawmakers. In requesting more than $600+ million for new facilities, Ward told lawmakers that cell phone-jamming technology is is not at the forefront of the agency’s initiatives because the older facilities make it difficult for the technology to work.

In this article:Georgia Department of Corrections, Ware State Prison