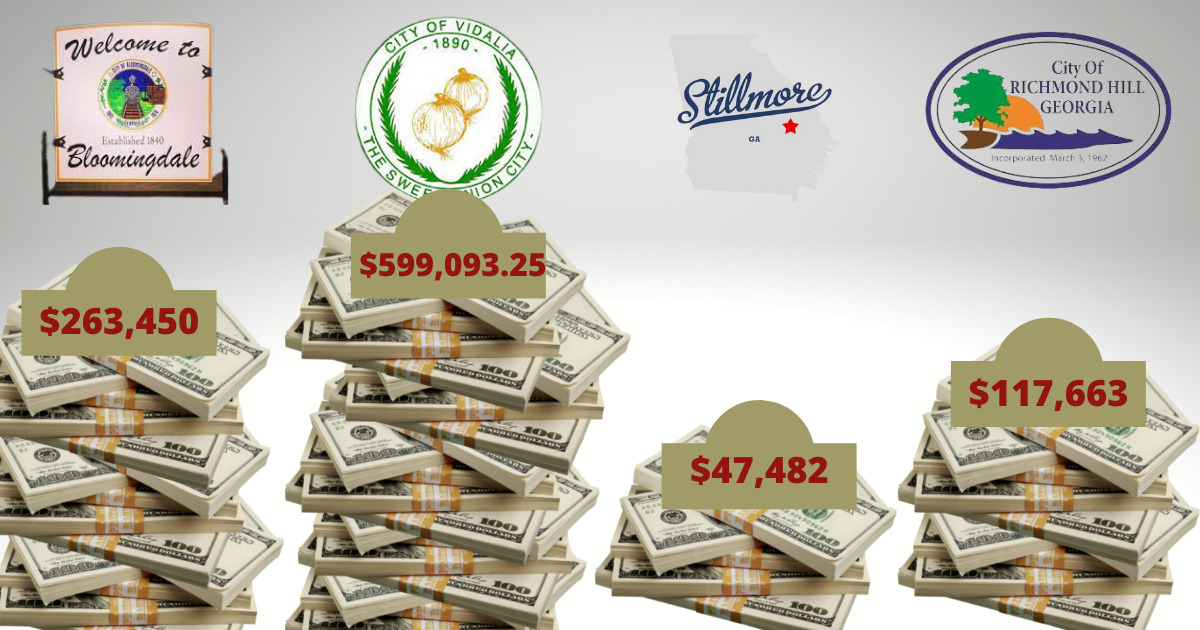 Cities continue to rake in the cash with school zone speed cameras, a public-private partnership that draws the ire of the public in what seems like perpetuity.

The placement of privately-owned speed detection cameras in cities across the state continue to assist cities in generating revenue with little to no effort or investment.
How do they do it?
Passing off the responsibility to private for-profit businesses that fine drivers for otherwise criminal traffic offenses.

The cameras may only be used in a school zone. There is no investment by the city or county, as the company installs the equipment.

Rules for violation times vary by jurisdiction. Some cities will issue violations all 24/7/365 while others limit the enforcement to school hours during school months.

Quite well, most would say, when considering the infusion of cash into small cities.

The Georgia Virtue filed a number of Open Records Requests across cities that utilize the cameras.

Read previous coverage on Vidalia’s use of the cameras.

Read about Bloomingdale’s use of the cameras prior to March 2021. 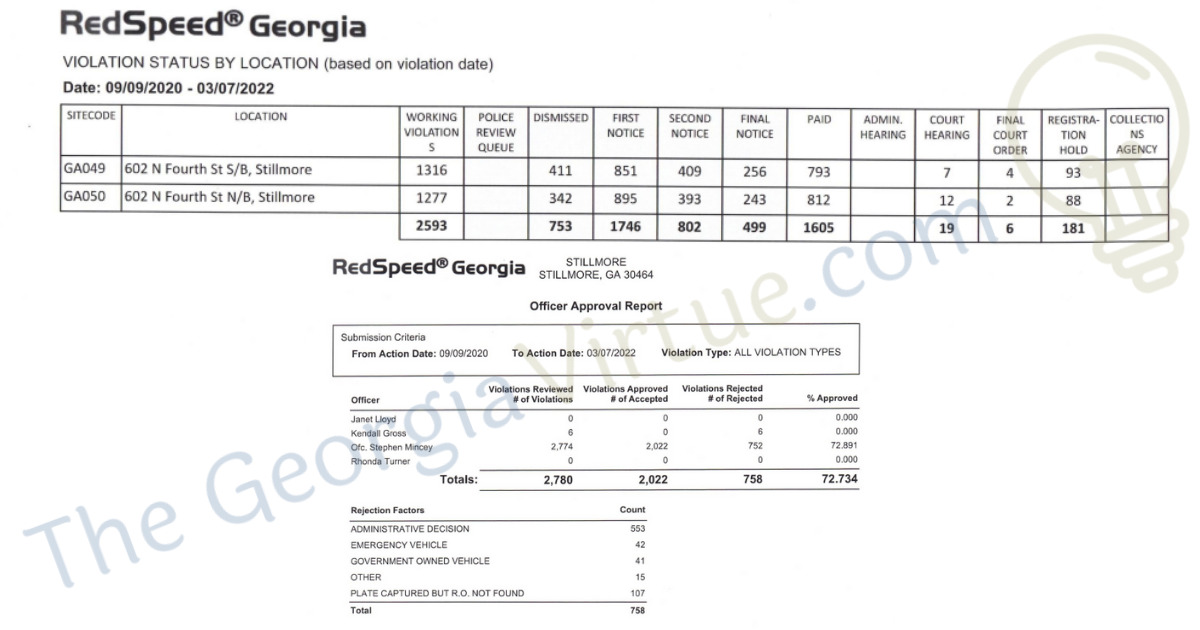 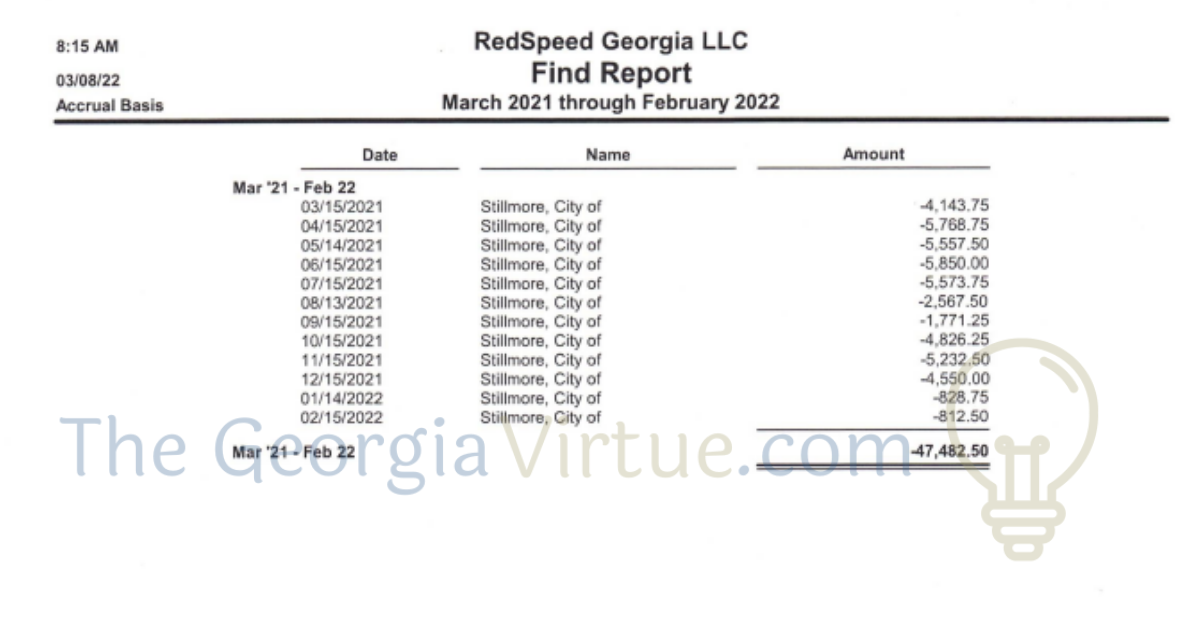 Previous coverage on The Georgia Virtue on Stillmore’s
use of speed cameras in school zones.

Because the infraction is handled under an administrative process, you have no right to face your accuser, as you do with moving violations, citations, and criminal offenses.

Unlike handheld radars calibrated and tested before each use by law enforcement officers, speed cameras rely solely on a ‘self-check’ system. The company otherwise manually checks the calibration of the detectors once to twice annually. There is no guarantee the machine is operating accurately. The City of Hamilton recently dismissed month’s worth of citations after discovering the radar did not work properly.

RedSpeed Georgia, Blue Line Solutions, LLC, and other similar companies have the ability to place a lien on the vehicle associated with the tag captured in the photo. Under the terms and conditions of most financed vehicles, a second lien on a vehicle impairs the security interest of the first lien holder – the financier – which can initiate the repossession process. That means your failure to pay a violation (not a moving violation or a citation) can trigger your vehicle being repossessed.

The sophisticated system is external and cloud-based. Violators pay tickets directly to the private entity through an online porta visible by city police, the clerk of court, and the municipal judge.

Contracts outline that companies provide data to the city during ‘normal working hours’ with the exception of trade secrets and ‘information not reasonably necessary for the prosecution of citations.’ The companies are also allowed to charge the cities for the information, which would otherwise ‘belong’ to the city.

Affidavits may be submitted if an individual requests a hearing in municipal court on the premise that the individual can suggest or prove another person was driving the vehicle at the time of the captured picture. Sworn affidavits, however, require a notary, which requires preparation ahead of court. Any other defense in a hearing in municipal court would require self-representation or representation by an attorney…for the violation of $75-$150. For most, that is not practical.

The companies provide no proof that the cameras are only collecting data of violators.

Motor vehicle databases and records accessed by the Georgia Department of Revenue are otherwise sealed from public record and available only by subpoenas from attorneys and other officers of the court. If a citizen or a member of the media wanted access to the database for any particular reason, the release of the data would be shielded under the Georgia Open Records Act. These companies have access to public safety databases, much like towing companies do. As a result, they act on behalf of the law enforcement agency.

How Georgia’s Annual Unemployment Rate Compares to the Nation