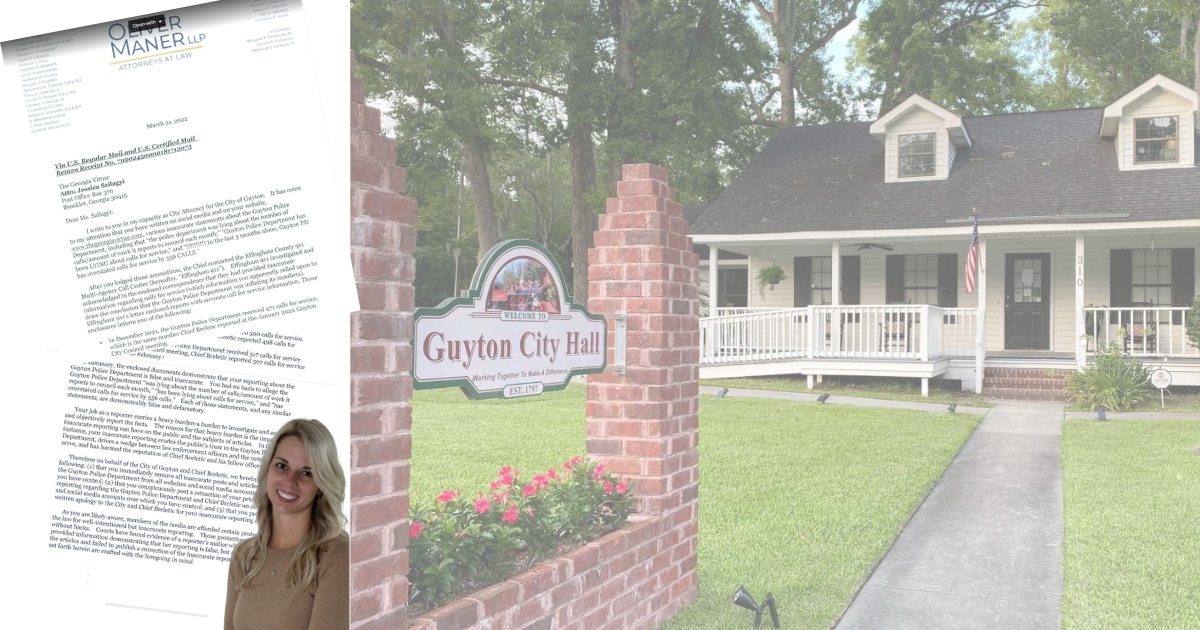 The City of Guyton, by and through its city attorney, is claiming defamatory remarks were made when a comparison of public records was published and is now demanding a written apology.

The Claims As Stated

A video published on a personal Facebook page on March 10 drew the ire of the police chief after claims were made that the police department was inflating its statistics on calls for service.

The inquiry began following a number of tips from first responders in and outside of Effingham County, along with a general understanding of ‘calls for service’ as they’re reported and discussed in other cities and counties around the state.

Data was obtained from Effingham 911 on ‘calls initiated by officers and calls initiated by the public’ and compared that data to the reports made in council meetings each month. The comparison reflected a vast discrepancy, which was outlined in the video.

Here are the claims made as depicted in a screen-by-screen grid view:

City Attorney Ben Perkins of OliverManer in Savannah sent a letter regarding the video, making demands for removal and claiming the video was defamatory.

The letter also included correspondence with the police chief following his own independent investigation with Effingham 911 where he sought a letter from the agency about the statistics. The agency did not mention ‘inaccurate’ information or an omission of data, but rather ‘a discrepancy’ because what the chief sought varied from what was sought for the video comparison.

The City Attorney further alleged that the ‘inaccurate and false’ reporting:

Even if the reporting was inaccurate (which it is not), it is neither illegal nor defamatory to ‘erode public trust’ just as it is neither to ‘drive a wedge between law enforcement and the community.’

Further, Mr. Perkins and the Guyton Police Department would have to prove:

It would be difficult to do that given the flurry of headlines about the Guyton Police Department and its employees, including:

Of course, neither the city attorney nor the police department are refuting the validity of any of the claims asserted in those articles.

As far as the claims of harm to the reputation of Breletic and his fellow officers, the only direct reference to the police chief himself was the mention that he is the one that reads the report to council each month. No officers were mentioned in the video. This specific reference is outlined in Minday v. Constitution Publishing Co. (1935) and Floyd v. Atlanta Newspapers, Inc (1960).

This is reiterated by the city attorney when he states in his March 21, 2022 that the inaccurate claims were that the “Guyton Police Department was lying about the number of calls/amount of work it reports to council each month,” “has been lying about calls for service,” and “has overstated calls for service by 556 calls.” (emphasis added)

OCGA § 51-5-1 defines libel (written untruths) as “a false and malicious defamation of another, expressed in print, writing, pictures, or signs, tending to injure the reputation of the person and exposing him to public hatred, contempt, or ridicule.’ Elements of malice include knowing the statement was false or defamatory, acting with reckless disregard for the truth, or acting negligently in failing to ascertain whether the statement was true or not.

The courts in Georgia have ruled repeatedly on the definition and elements of defamation and libel, to include:

Is a police department, or city government generally, a private citizen or a public person?

Further, the police chief is not a private citizen and, under the precedent, neither are the police officers. In the Georgia case Evans v. Sandersville Georgian, Inc. (2009), the court found that “as a public figure, the officer had to establish actual malice on the part of the newspaper under O.C.G.A. § 51-5-7(9) and New York Times Co. v. Sullivan, 376 U.S. 254 (1964), but failed to do so because the statements at issue were opinions that were not susceptible of being proved true or false.”

Why does this matter?

The city attorney asserted in his letter that the courts ‘found evidence of a reporter’s malice when a reporter was provided information demonstrating that her reporting is false, but she failed to retract the articles and failed to publish a correction of the inaccurate reporting.’ The city attorney even acknowledged in his letter that the numbers did not match those from Effingham 911, but still contends there is a malicious intent in comparing the city records with those of Effingham 911.

If a person alleging defamation is a public figure, the claims can only be held to the standard of ‘reckless disregard as to the truth or falsity of the statement.’

Utilizing video footage from a city council meeting, filing open records requests with the City of Guyton, and comparing that to the reputable agency of Effingham 911 hardly appears ‘reckless’ or without regard for the truth. It also isn’t negligent.

Altering statements made by me at the demands of an attorney who is paid $1,375 to attend one city council meeting appears to show more reckless disregard for the truth than adhering to public records.

The city attorney demanded the following on behalf of the city and the police chief.

In order for something to be false or inaccurate, it has to be untrue.

When examining the data, when comparing with other agencies, and when considering the information as a private individual with an opinion, it is clear the department is overstating the calls for service.

No matter how you slice the pie, the result is the same: nothing false or inaccurate was reported.

If it’s classified as an opinion, it cannot be false.

If it’s classified as a factual statement, and the statements are based on public statements, public records, and general dictionary definitions, it is not inaccurate.