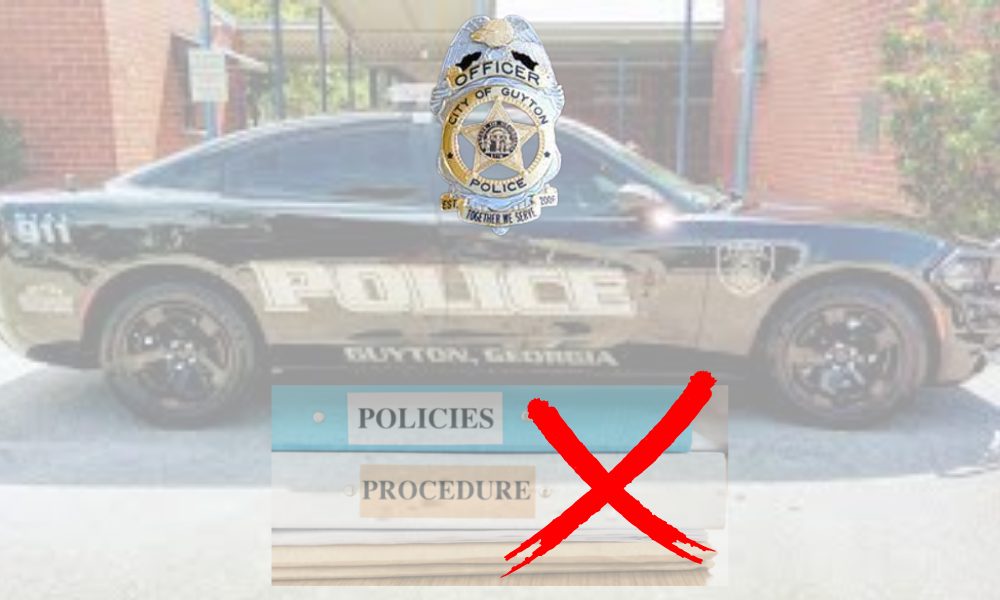 An Open Records Request filed this week with the City of Guyton reveals that the city police department has no formal policy manual in place governing how police officers conduct themselves or guiding general operations.

Law enforcement agencies utilize policy manuals to provide staff with the guidance necessary to perform department operations. According to the International Association of Chiefs of Police, “a policy-procedure manual provides staff with the information to act decisively, consistently, and legally. It also promotes confidence and professional conduct among staff.”

The manuals include specific protocols on important matters like Use of Force, disciplinary investigations, departmental vehicles and equipment, record retention policies – particularly for body-worn cameras and in-car dash cameras, and whether or not officers are permitted to engage in chases.

Additionally, the policies govern operational matters such as uniforms, promotions, training requirements, mutual aid agreements with other agencies, off-duty work, and incident and arrest reports. Many policy manuals also include mission statements, core values, tenets of conduct, a code of ethics, an oath of honor, social media policies, and an organizational chart.

Policies that are specific to law enforcement are standard given the unique scope of work and the focus on officer safety, expectations, accountability, and the law. Among other things, the policies are supposed to ensure every officer treats citizens the same way. The Department of Justice has archived reports from the earlier 2000s which emphasize the importance of having a policy manual to serve as a working document for every officer under almost any situation.”

Every credible agency has their own working document. In recent years, agencies focused on transparency and public information have gone as far as to publish the agency’s entire policy on its website so interested parties need not file a request for public records to understand how an agency operates.

An internet search for ‘police department policy manual’ conducted prior to publishing offered more than 11,900,000 search results including copies of the policy manuals from agencies of all sizes, including Covington, Atlanta, Duluth, Lyons, Johns Creek, the Georgia Department of Public Safety, and the East Georgia State College Police Department.

The Guyton Police Department in Effingham County does not utilize an agency-specific policy manual. A number of Open Records Requests filed in January 2022 included a copy of the entire manual for the department. The request was prompted by a post of a letter from the city clerk made on social media, which indicated the city did ‘not have a body camera policy.’

Here’s what was sought:

City Clerk Meketa Brown fulfilled the records request on the manual and copied Chief Breletic in the response with the document, which was identical to the Employee Handbook used for general employees in the City of Guyton, like public works. She stated that the Guyton Police Department utilizes the generalized document to govern PD employees.

No additional information appears on the Guyton website other than a contact phone number and a link to pay traffic tickets.

The Employee Handbook addresses general matters such as at-will employment, equal opportunity acts, paid time off, evaluations, discipline, telecommuting, and political activity. But the manual does not dive into the specifics of the police department operations, nor does it distinguish police department employees from city hall employees.

Subsequently, the Guyton Police Department has no policy on use of force, body cameras, dash cameras, interaction with the public, discretion, arrests, working with other agencies, or any other policing matter.