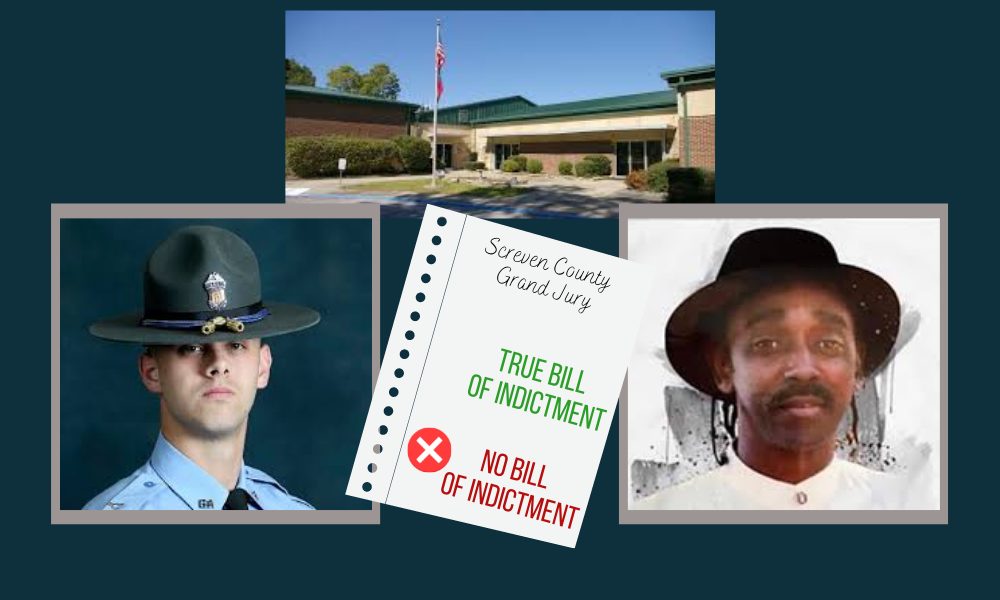 A Screven County grand jury of 22 citizens returned a no bill of indictment on the charges against former GSP Trooper Jacob Thompson on Monday. As a result, Thompson’s case will not move forward for trial at this time.

The Ogeechee Judicial Circuit Distirct Attorney’s Office presented indictments of felony murder (O.C.G.A. 16-5-1) and Aggravated Assault (O.C.G.A. 16-5-21) for consideration by grand jurors, the first case of its kind in Screven County. District Attorney Daphne Totten and Assistant District Attorneys Ben Edwards and Barclay Black presented the case to grand jurors, a process that is closed to the public under Georgia law.

The incident occurred just shy of 11 months ago and despite the high profile nature of the case, the district attorney’s office has not given the perception that the case was prioritized for resolution as the road to grand jury has been a bumpy one.

The initial January scheduling of the grand jury presentment was abruptly canceled by the district attorney’s office the day before it was set to take place prompting defense attorneys to accuse the state of ‘grand jury shopping.’ Those attorneys ultimately asked the court to compel the state to move forward as planned, which Superior Court Judge Lovett Bennett denied and the matter was appealed to the Georgia Supreme Court. Justices were split on whether or not to hear the case, but ultimately declined not to consider the matter at the time. After prosecutors said in March that they were still not ready to present the case, the next grand jury was empaneled in April 2021.

The Georgia Bureau of Investigation charged Thompson with felony murder and aggravated assault in the shooting death of Julian Lewis, a motorist Thompson attempted to stop in Screven County on the evening of August 7, 2020. A pursuit ensued when Lewis fled, leading Thompson to perform a PIT maneuver to end the chase, but when the vehicles came to a stop and Thompson exited his patrol car, he says he heard the engine revving, and believed Lewis was going to use his vehicle to harm him. Thompson fired one shot, striking Lewis in the head. The GBI has contended that the use of force was not justified because Lewis’ car was disabled and off when agents arrived on the scene approximately two hours after the shooting. The agency arrested him August 14, 2020 – seven days after the incident. Francys Johnson, who represents the Lewis family, later praised the GBI and the DA’s office, saying the case was moving at an unusual pace and Thompson was arrested in “record time.”

Aside from the claims of ‘grand jury shopping,’ the defense team also spent time in March arguing against a demand by the state to turn over financial documents pertaining to how Thompson has been paying his legal bills. ADA Barclay Black alleged in a hearing that the state needed to know who was donating to the defense team to rule out potential conflicts, though that does not deem a grand juror ineligible under state law. The request was tossed by Judge Lovett Bennett on the basis of the poorly detailed subpoenas which were overly broad, information was sought which is protected by attorney-client privilege, and they were “oppressive in nature.”

The same grand jury met in April of this year to hear a few dozen cases, including four felony cases involving charges that would mirror those that Julian lewis would have faced had the August 7, 2020 incident ended differently — fleeing, DUI, driving on a suspended license, failure to stop at a stop sign and more. One of those four cases also included assault on a law enforcement officer. The grand jury returned a true bill of indictment on all four cases, meaning they believed enough evidence existed for the case to move forward to the trial stage. A fifth case with a stand-alone charge of fleeing or attempting to elude a law enforcement officer was also presented and received a true bill by the grand jury.

The presentation of those five cases as felonies illustrates the dichotomy the district attorney’s office has had to balance all along in arguing that acts in one circumstance were wrong but irrelevant in another.

On Monday, the grand jurors empaneled in April were called back for consideration of additional cases. In the Thompson case, GBI Agent Dustin Peak and Screven County Sheriff’s Office Investigator Dwight Singleton were present to testify. After convening just after 9:00 A.M., the state concluded its presentation around 1:50 p.m. after taking almost an hour for lunch.

Thompson elected to testify on his own behalf – the first time since the case began, outside of interviews with the GBI and a statement to the Georgia State Patrol following the incident. Under Georgia law, he is afforded the right to testify before the grand jury but is then subject to cross examination by the state and grand jurors. His time in the grand jury room amounted to a little under two hours.

All in all, the grand jury was in session for almost eight hours on Monday.

Because the grand jurors already true billed a number of cases when they convened in April, nearly all of the grand jurors names were available for public review. The Georgia Virtue examined the names and cross-referenced them with the criminal records in the four-county circuit that entails the Ogeechee Judicial Circuit. At least four of the individuals empaneled in the grand jury had been cited or arrested by Thompson when he was a Trooper. One of them was arrested and pleaded guilty to DUI and fleeing.

According to the Clerk of Court’s office, four of the grand jurors empaneled had been excused from Monday’s proceedings at their own request. Another was removed from the list because the individual moved outside the county. Any grand juror who requested to be excused had to make their case to Judge Gates Peed before it was approved, unless they had moved outside of Screven County or were over the age of 75.

Under Georgia law, the District Attorney’s Office can opt to bring the case before a grand jury one more time. Per OCGA 17-7-53, if the case is brought before a grand jury again and that grand jury returns a “no bill,” on the same charge or allegation, the state will be barred from any future prosecution.

In November 2020, attorneys for the family of Julian Lewis announced in front of the federal courthouse in Savannah that they intended to sue the state of Georgia for the actions of Thompson. Seeking $12 million, attorneys Francys Johnson and Muwali Davis said they served the state with an ante litem notice, notifying of their intent to file a lawsuit. If a resolution was not reached within three weeks, a federal lawsuit would be filed. On June 25, 2021, The Georgia Virtue confirmed with the Georgia Department of Public Safety and state agencies that no settlement agreement had been awarded in any pending civil suit as it pertains to the Jacob Thompson. Specifically, the state said it had not been served with a lawsuit.

The Thompson defense team issued a statement after the return of the no bill:

“First and foremost, we would like to say, on behalf of Jake Thompson and the entire family, and everyone concerned, our hearts, thoughts, and prayers go out to the Lewis family. We all mourn his death and pray for their peace.

In regards to this case, Trooper Thompson’s actions that night were not crimes. He was just a man who was doing his job to protect the citizens of the State of Georgia.

We are all grateful that after this case was thoroughly investigation, the grand jury recognized that.

We are all satisfied the grand jury made the correct decision in this case.”