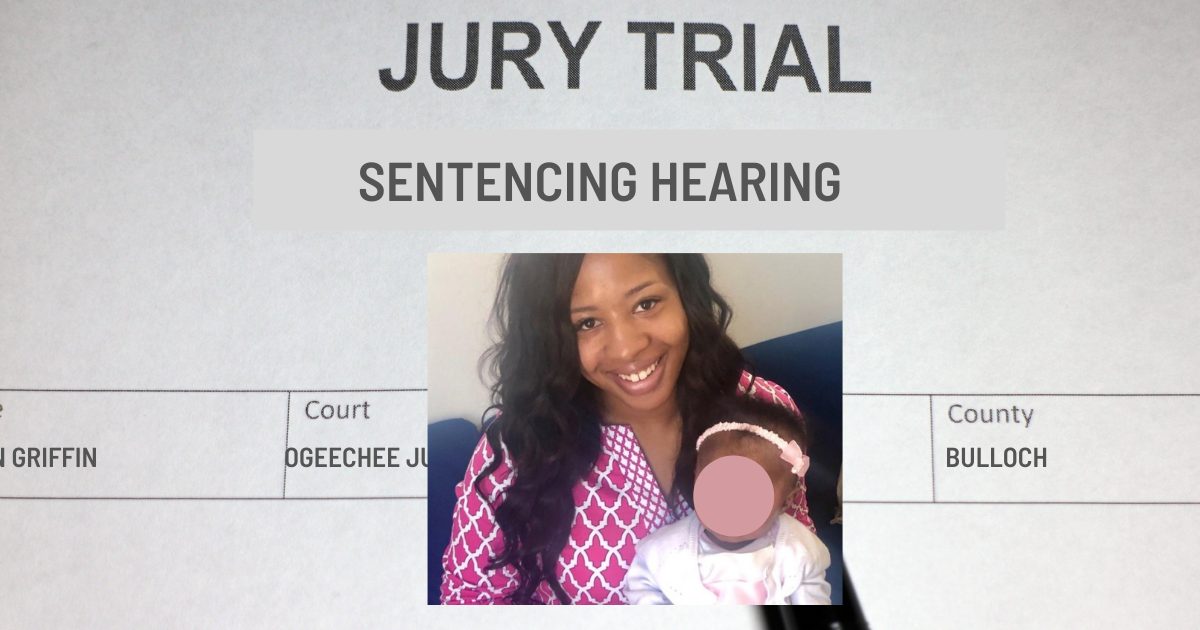 A Bulloch County judge sentenced Ashlyn Griffin on Monday, four days after a jury returned a split verdict in her murder trial.

Monday’s afternoon sentencing hearing began with an announcement from Judge F. Gates Peed. He told both parties that he received an email from the alternate juror in the case, who had been sequestered from the remaining jurors during deliberations. The email was not read aloud in open court, nor was the juror identified, but detailed concerns of the individual about the jury which found Griffin guilty of some offenses.

Statesboro Police charged Griffin with murder in the shooting death of her boyfriend, Brandon McCray, in June 2020. Though the agency arrested McCray for violently assaulting Griffin in 2018, when Griffin claimed she acted in self-defense in the 2020 case, neither the police nor District Attorney Daphne Totten believed her. Totten presented the case to a grand jury in November 2020.

In November 2021, Griffin testified at her own immunity hearing, sharing with the court why she feared for her life when she shot McCray. When she stated that she didn’t want McCray to die, Assistant District Attorney Barclay Black moved for the motion for immunity to be dismissed, which Judge F. Gates Peed granted.

Griffin’s Felony Murder trial began last Monday and continued for two and a half days before jurors were sent to deliberate.

A jury of twelve determined Thursday that Griffin was acting in self-defense when she killed McCray, but returned an inconsistent verdict on two other charges. Jurors said Griffin was guilty of Aggravated Assault and Possession of a Firearm During the Commission of a Felony during the same incident. Both charges are felonies and carry a one to twenty year sentence and a one to five year sentence, respectively. Georgia law requires that the Possession of a Firearm sentence run consecutively to any other sentence imposed.

On Monday, Judge Peed denied the defense’s request for a directed verdict, or to act as “the 13th juror” and override the jury’s conclusions.

Peed then heard from both the state and the defense as to the appropriate sentence.

Black asked the court to sentence Griffin to 15 years to serve in prison for the Aggravated Assault conviction, plus five years on probation for the Possession of a Firearm During the Commission of a Felony. The recommendation is 75% of the maximum on the assault charge and, despite the probated nature, 100% of the maximum term for the possession charge.

The Court heard from Ashlyn Griffin’s mother, father, and a friend from high school – who is an attorney. Each pleaded with the court for leniency.

Peed ultimately sentenced Griffin to 10 years to serve in prison on the Aggravated Assault charge followed by 10 years on probation, plus five additional years for the Possession charge. She was sentenced under the First Offender Act, which the state opposed.

She was taken into the custody of the Sheriff’s office to be held at the Bulloch County Jail until she is transferred to a facility.

A GoFundMe has been created to assist with her legal defense, which will now balloon due to the cost of an appeal. Visit.

OTHER ARTICLES ON THIS CASE

This article erroneously indicated the second sentence included 5 years of confinement. It is a probated sentence.

COLUMN: Trust the Parents When it Comes to Education